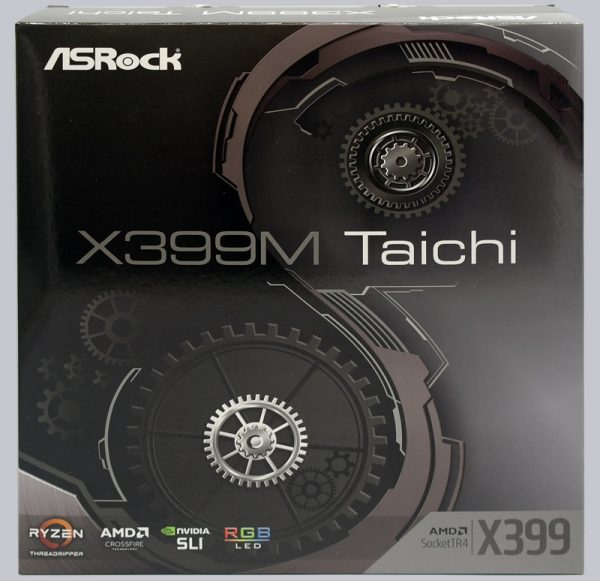 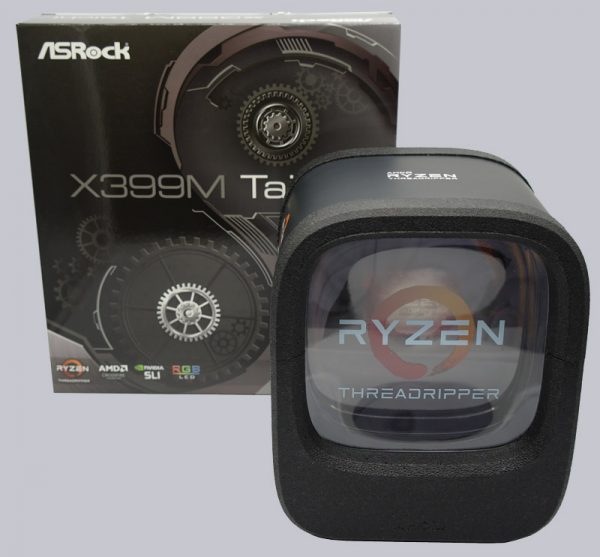 And because the AMD Ryzen Threadripper packaging is so interesting, we even created a 360 degree view of it.

The back already shows some of the features like 11 Phase Power, XXL Heatsink, 8-layer board, U.2 Connector, WiFi, Dual LAN, Purity Sound 4, RGB LED, BIOS Flashback and much more. 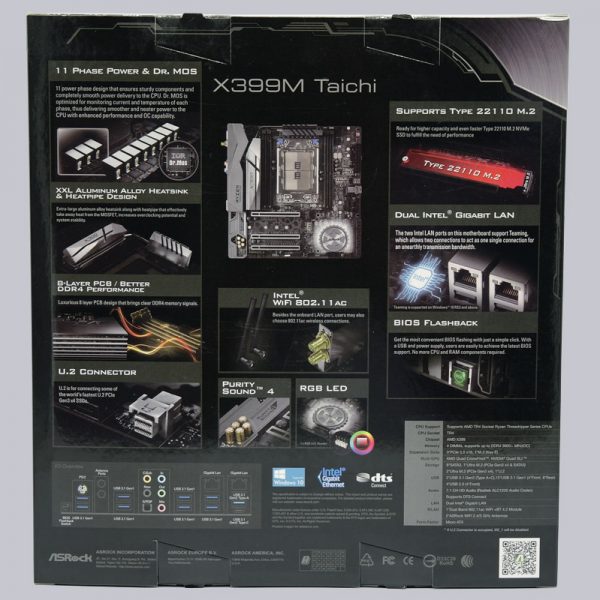 There is another box inside of the box. 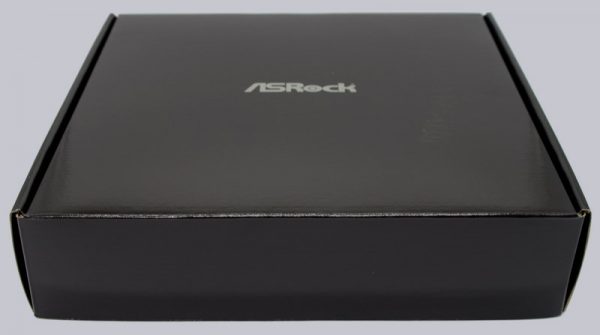 Here you can see the supplied accessories. 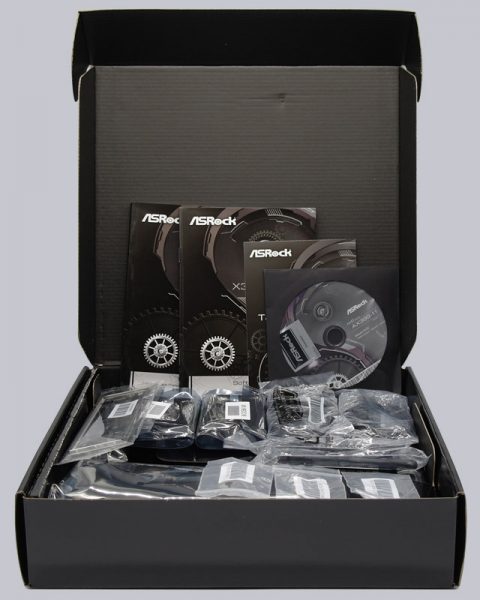 Like most high quality ASRock motherboards, the X399M Taichi Board has been framed in foam for safe transport. 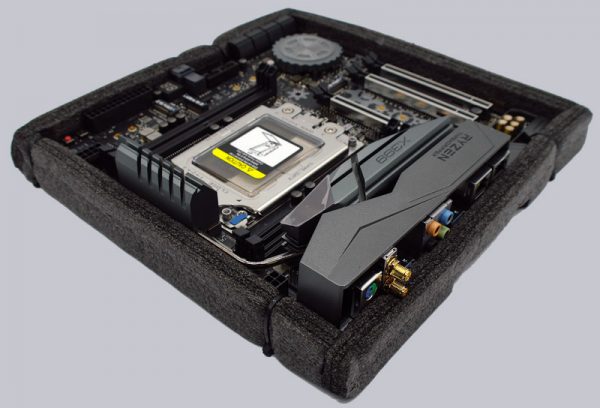 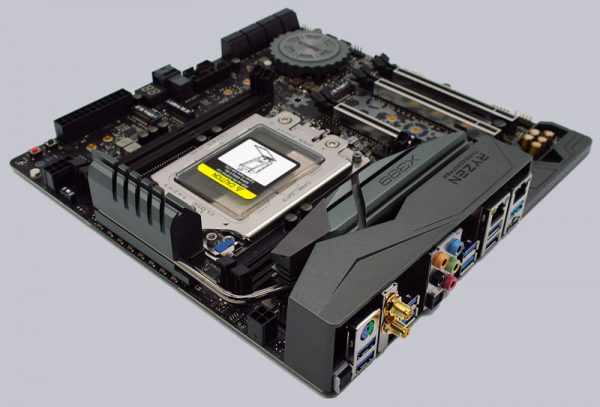 And because the ASRock X399M Taichi is so interesting, we even created a 360 degree view of the Micro ATX motherboard.

The ASRock X399M Taichi has even a Dr. Debug 7-segment LED postcode display and has two simple buttons for power and reset. It also offers three! fast Ultra M.2 slots for PCIe Gen3 x4 modules with up to 32 Gb/s connection, which can now even be operated in RAID. 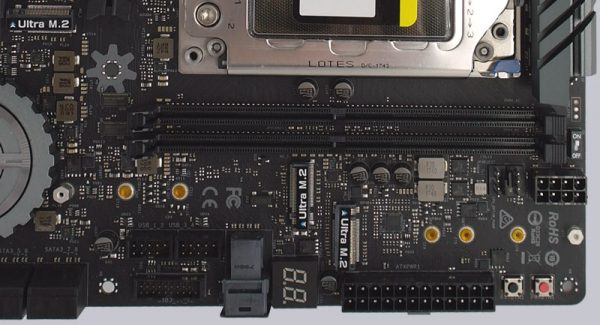 On the picture you can see the PCIe steel slots. A conventional RGB Stripe can be connected to the white 4-pin 12V RGB header to illuminate the case, for example.

ASRock has even integrated RGB LEDs under the chipset cooler of this Micro ATX motherboard, which can be controlled as desired. Via the UEFI you can make all settings on this AMD motherboard, but not graphically, as e.g. on the ASRock Z270 motherboards, but in ASRock X399M Taichi UEFI Video we show how it works. 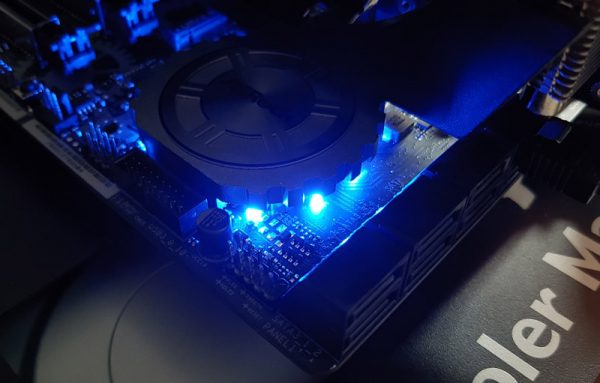 Here you can see one of the two internal USB3.0 connectors, next to it the U.2 connector, Dr. Debug display, 24-pin ATX power connector, an additional 8 pin 12 volt power connector, some of the high-quality Nichicon 12K Black Caps capacitors, as well as both buttons for power and reset. 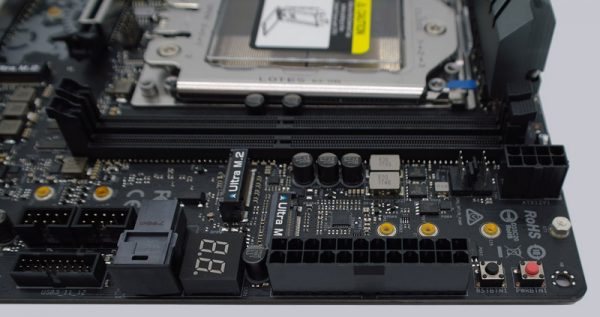 In contrast to the large ATX motherboard, the 8 pin 12 volt power connection clearly shows the lack of space, because the connectors are so tight due to the M.2 slot and memory module that the holding clips of the Dual Power Connector can hardly be operated. 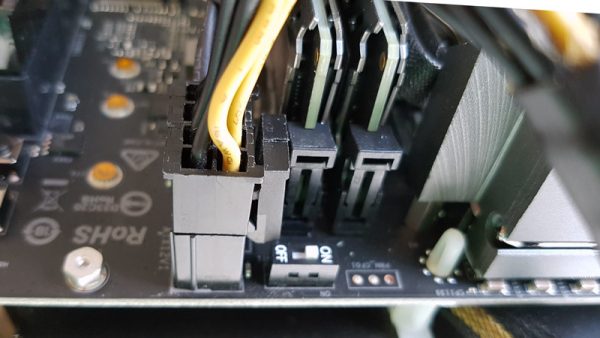 The following picture shows a side view of the mainboard with the protective I/O panel cover (I/O Armor) and the large XXL heat sink made of aluminum alloy, which was mounted very carefully on the MOSFETs. 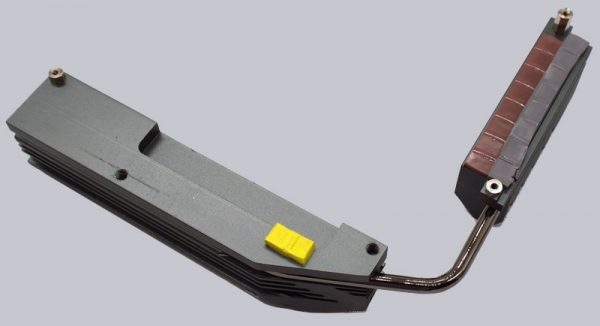 Of course we demounted the heatsink of the ASRock X399M Taichi to show exactly what’s cooled. 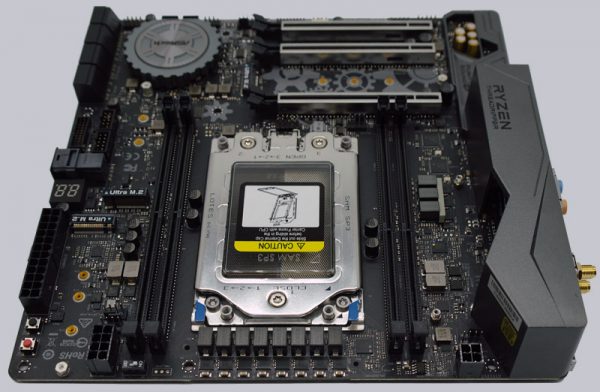 Here you can see the so-called Smart Power Stage with nothing less than altogether 11 60A MOSFETs and Power Chokes. 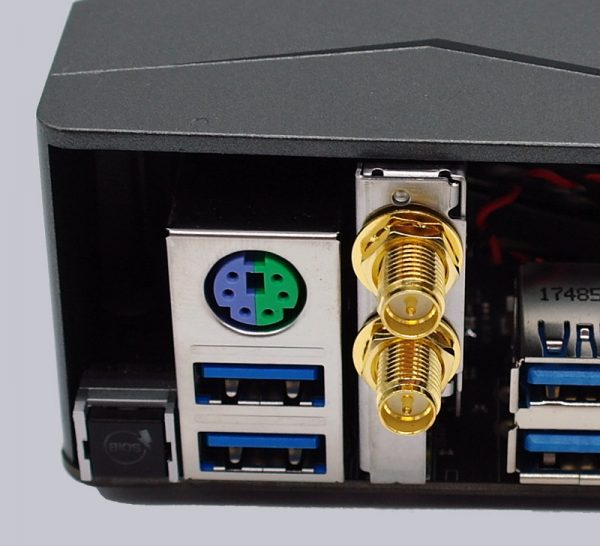 The motherboard offers three PCI Express 3.0 x16 slots for AMD CrossFireX or nVidia SLI, of which one or two graphics cards with x16 bandwidth can be connected.

The ASRock X399M Taichi Board can be equipped with up to four DDR4 modules and can be upgraded depending upon operating system used (see list) up to maximally 64 GB memory.

Here you can see a picture of the four DDR4 memory slots with Quad Channel Support: 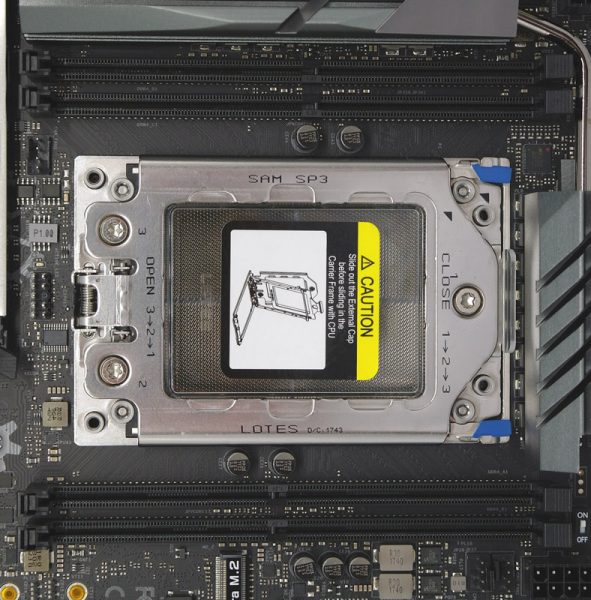 The AMD TR4 motherboard supports DDR4 memory modules and can be optimized in the BIOS with a Ryzen processor for DDR4-2667 quad channel modules. The UEFI still offers adjustments from DDR4-1866 up to DDR4-3600. Higher storage rates are possible by manual BCLK overclocking.

Thanks to XMP support (Extreme Memory Profiles), XMP memory modules are set correctly with one mouse click in the UEFI and of course there are far more memory adjustments and more OC-options, but more on that later. Before buying the RAM, you should check the officially supported RAM modules at the ASRock memory support page, which is also very important for AMD Ryzen Threadripper systems.

The ASRock X399M Taichi offers a total of eight angled SATA3 ports and a U.2 port for NVM Express modules up to Gen3 x4, which corresponds to 32 Gb/s.

The SATA3 ports support RAID 0, RAID 1, RAID 10, NCQ, AHCI and the Hot Plug function in AHCI mode (AHCI stands for Advanced Host Controller Interface and should be selected especially for SSDs in UEFI). Thanks to UEFI BIOS, drives with more than 2TB can also be used for the installation of Windows 10, Windows 8.1 Windows 7 x64. The installation of the drivers ran without problems in Windows 10, so that the Windows 10 installation was quickly completed. But even Windows 7 could still be installed without any problems.

The RAID drivers can be installed via the Easy RAID Installer point in the UEFI, are supplied for 32-bit / 64-bit Windows 7, Windows 8 and Windows 10 on DVD and are additionally available for download on the ASRock support page, whereby the Windows 10 installation is currently preferred. 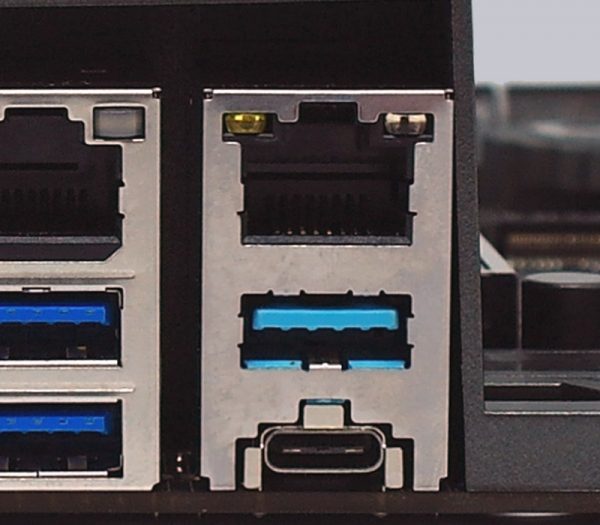 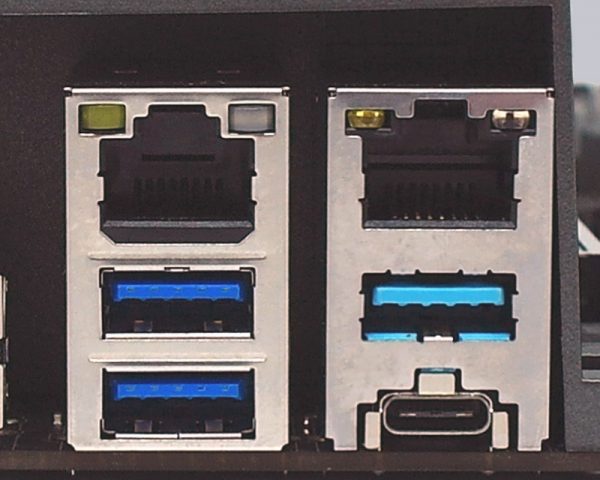 The ASRock X399M Taichi motherboard is equipped with the ALC1220 audio codec with content protection, 120dB SNR DAC, TI NE5532 Premium Headset Amplifier and Purity Sound 4, which supports 7.1 surround sound at the internal front panel audio connector and has analog output over 5x 3.5mm connectors on the ATX panel. Additionally, there is an optical SPDIF digital output and premium Blu-Ray audio support. So most users do not need to buy an additional sound card with digital outputs. 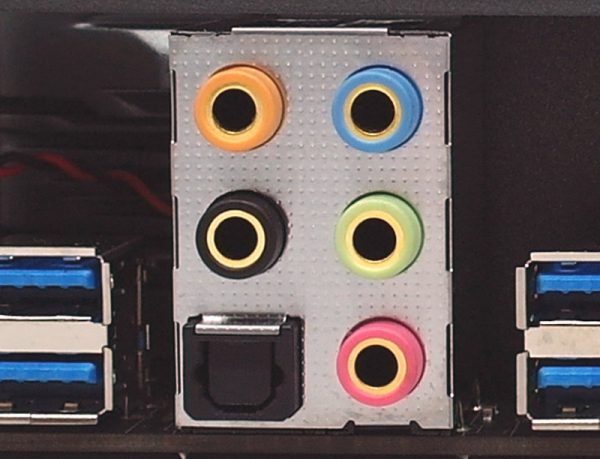 Now we come to the AMD TR4 CPU socket, which is equipped as shown on the following video:

Here you can see a small sequence of the correct AMD TR4 socket CPU placement. The screws on the socket are labeled. The screws should be in the order shown on the socket: To open 3 -> 2 -> 1 and to close 1 -> 2 -> 3, although it is possible that you may have to press the screws on a new TR4 socket quite firmly at the beginning in order to tighten them.

The AMD Ryzen Threadripper CPU is really huge, as you can see on the following picture in comparison to the AMD Ryzen 7 1800X CPU. 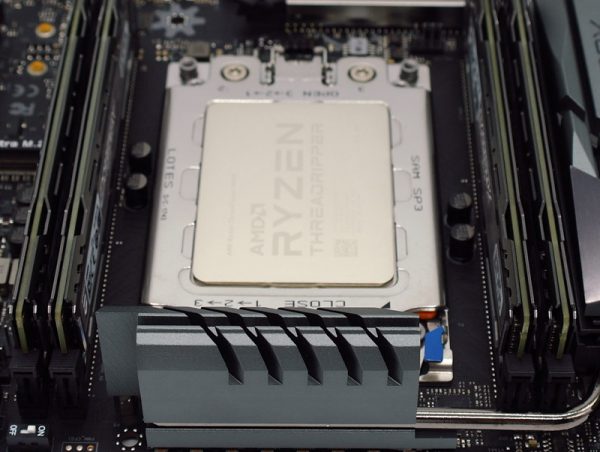 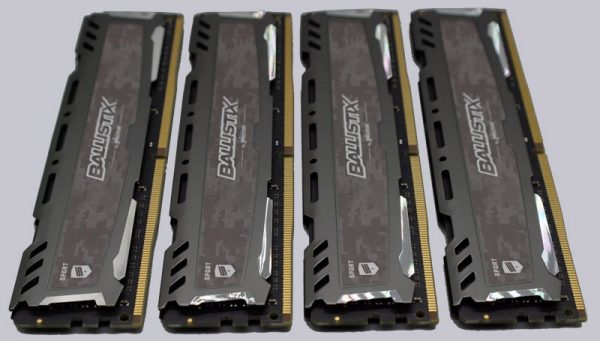 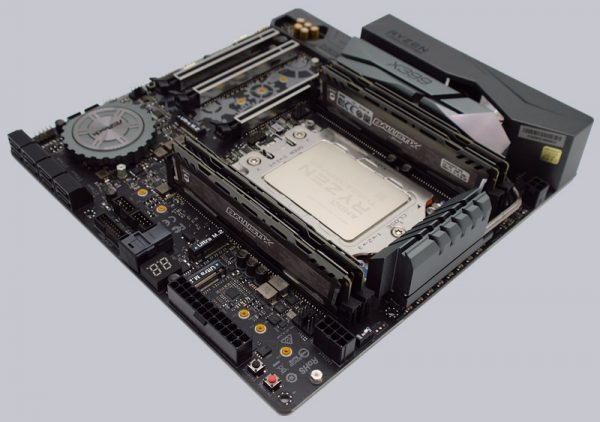 Here you can see the complete ASRock X399M Taichi with memory and CPU before it’s installed on the Cooler Master Testbench. 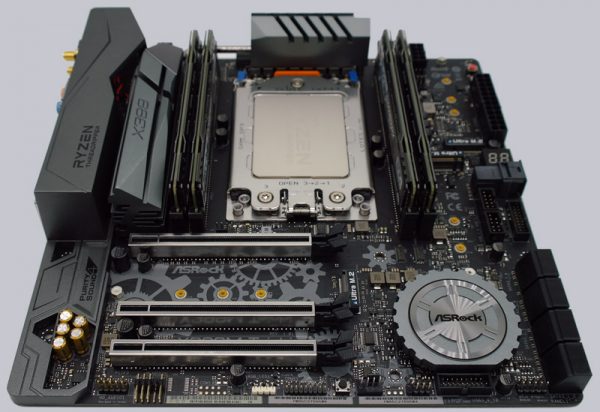 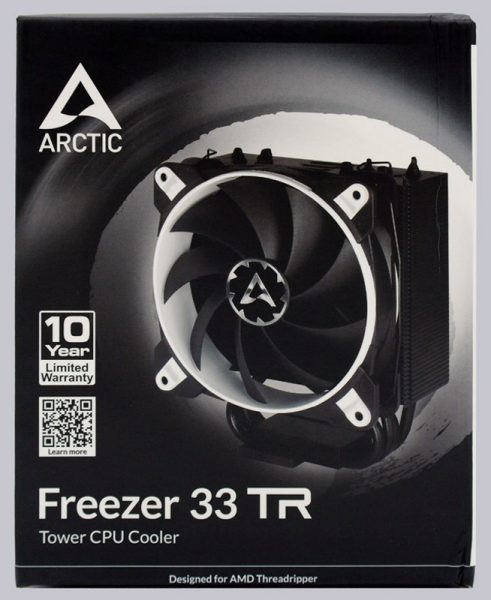 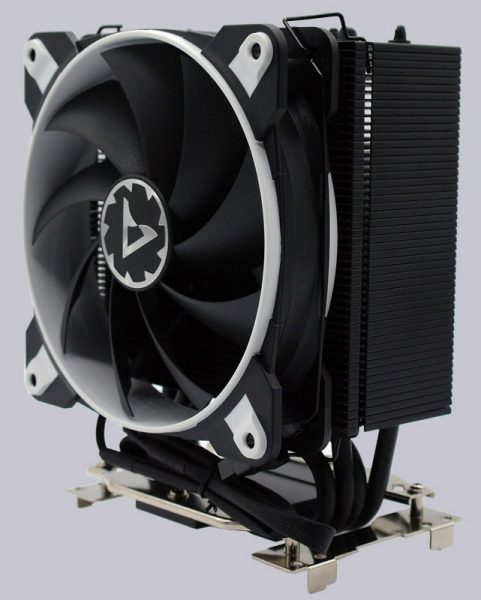 In the meantime we have received the newer metal brackets, which make the Freezer 33 TR easier to install. The following picture shows the AMD TR4 test system including Arctic Freezer 33 TR cooler, MSI Radeon R9 280 graphics card and Icy Dock MB171SP-B Turbo Swap for fast replacement of SSD and HDD. 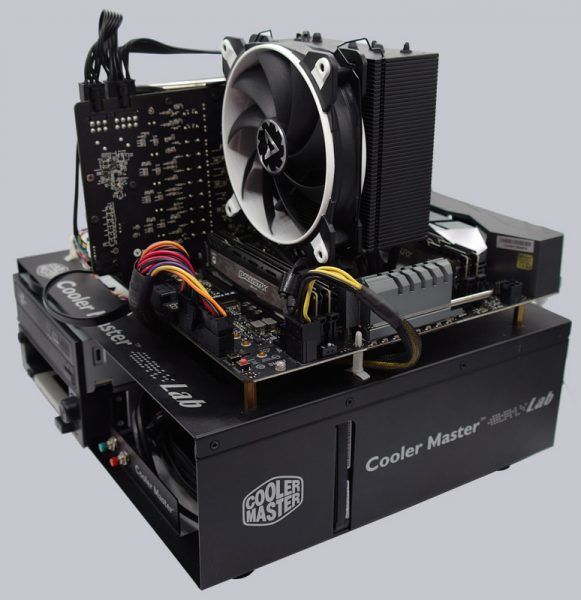 As you can see on the thermal image of the PC system, the AMD X399 chipset and the voltage converters remain pleasantly cool. 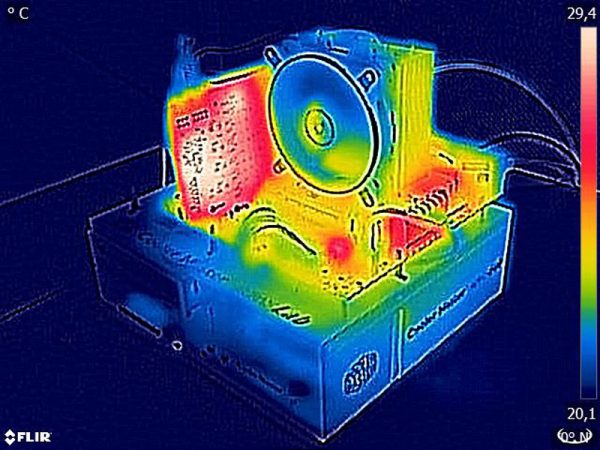 This is how the 8 cores with SMT (16 threads) of the AMD Ryzen Threadripper 1900X CPU looks like in Windows 10 Task Manager at Prime95 full load. 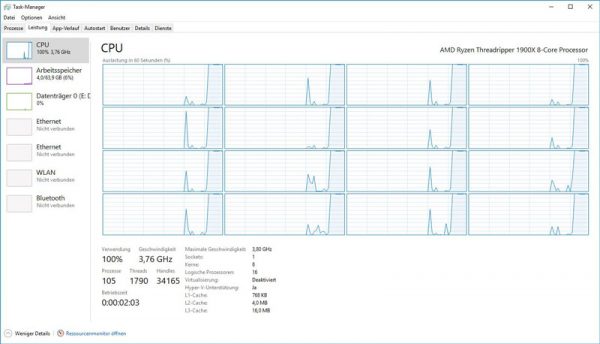