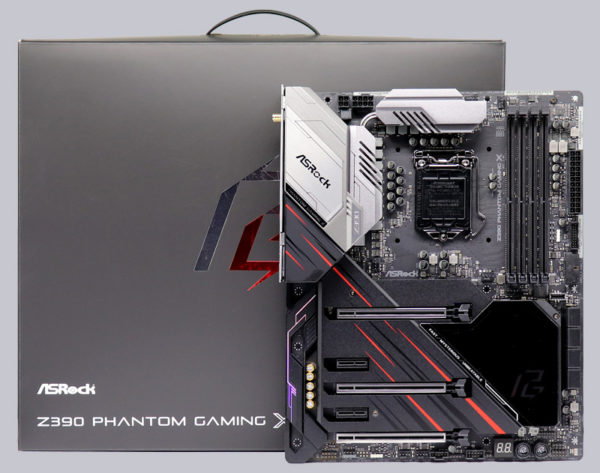 The ASRock Z390 Phantom Gaming X features a Dr. Debug 7-segment LED postcode display, LED illuminated buttons for power and reset, offers three fast Ultra M.2 slots for PCIe Gen3 x4 modules with up to 32 Gb/s connection. The following picture shows the five PCIe 3.0 slots and the three M.2 slots. All three M.2 sockets are equipped with a huge heat sink. To mount an M.2 SSD, loosen the three Torx screws of the heat sink with the supplied ASRock T8 screwdriver. Then carefully remove the heat sink, because for the RGB lighting it is still connected to a plug on the motherboard. 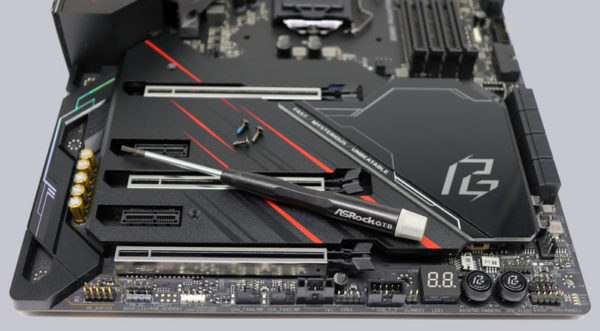 We have tested the Z390 Phantom Gaming X with two Crucial P1 1TB M.2 PCIe 3.0 x4 NVMe 32Gb/s SSDs, as you can see here with the dismantled M.2 cooler. Before attaching the M.2 cooler to the M.2 SSD, be sure to remove the blue protective film from the thermal pad. 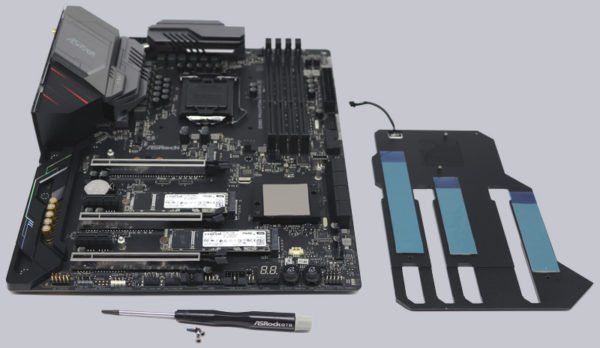 But also the backside of the ASRock Z390 Phantom Gaming X is worth seeing, because ASRock has attached a backplate for amplification with heavy graphics cards or heavy coolers. 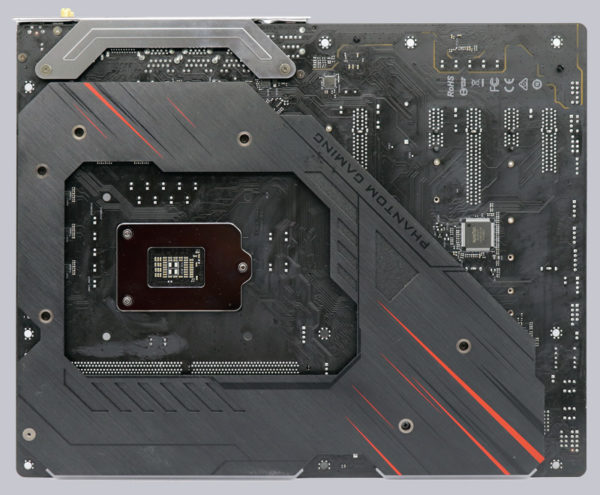 You can connect conventional 5050 RGB strips to the two white 4-pin 12V RGB headers as usual, for example to illuminate the enclosure. And there is an additional (grey) Polychrome RGB connector, which supports individually addressable LEDs for addressable RGB strips via the WS2812B. 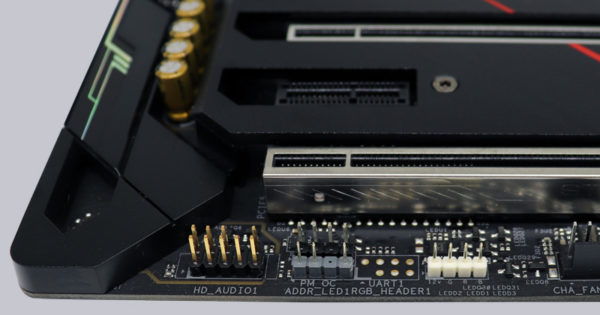 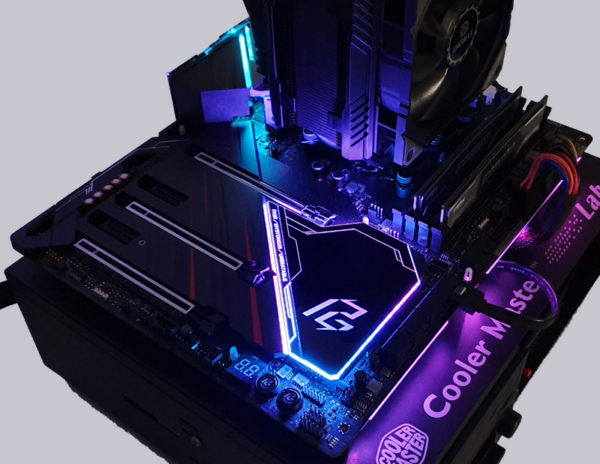 The RGB headers and the integrated ARGB LEDs are controlled by UEFI or by the supplied ASRock Polychrome RGB LED software. For example, you can select the colors in an RGB color selector and set whether the RGB headers should be controlled separately or together with the RGB lighting under the chipset cooler, the IO cover and the lower area. The lighting can of course be completely deactivated or, depending on the effect, applied to all connections at the same time. 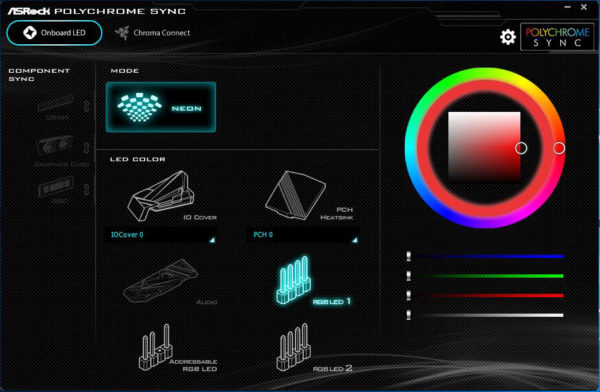 Now it’s even possible in the new ASRock Polychrome RGB software that every LED under the chipset cooler and the IO cover can be controlled individually! 😀 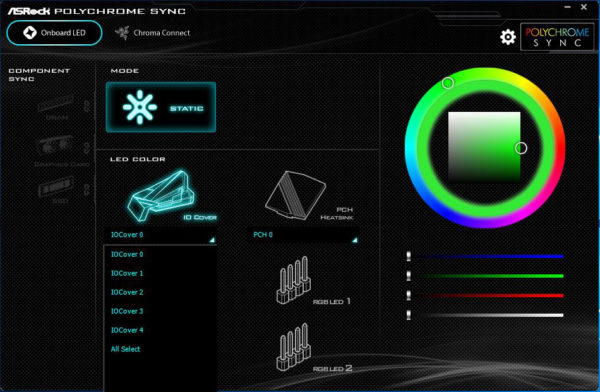 In the ASRock Polychrome RGB LED software, for example, you select the colors in an RGB color selector. Of course you can also deactivate the lighting completely. And with the addressable RGB connector and the integrated ARGB LEDs you even get completely new RGB features such as Spring, Meteor, Stack, Rainbow, etc.. 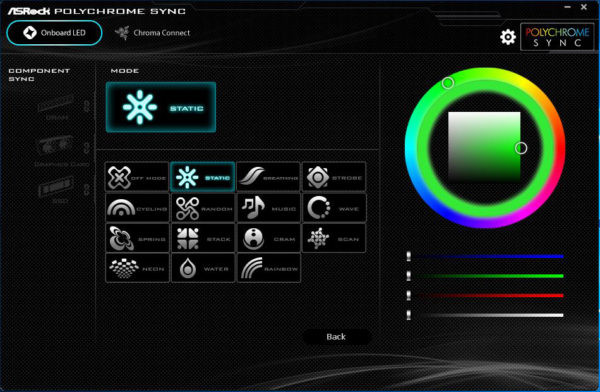 So you get lots of great RGB effects, which we presented in ASRock Polychrome RGB Software Video on our OCinside YouTube Channel.
Note: Please allow our cookies first to see this content! 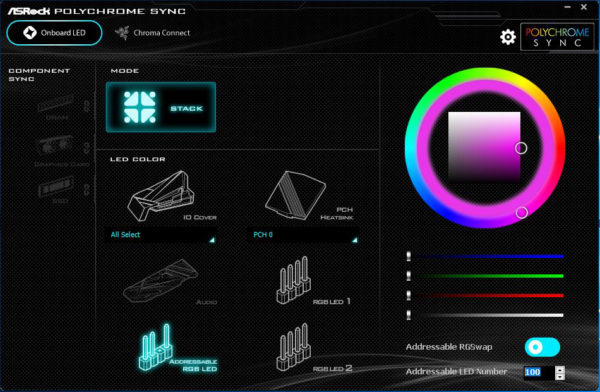 And to get an impression of the very special ASRock Z390 Phantom Gaming X effects, we created another video here.

Let’s get back to the equipment, again. On the left you can see the front USB 3.1 Gen2 type-C connector, next to it two internal USB3.1 Gen1 connectors, the second RGB connector, some Nichicon capacitors and the 24-pin ATX power connector. 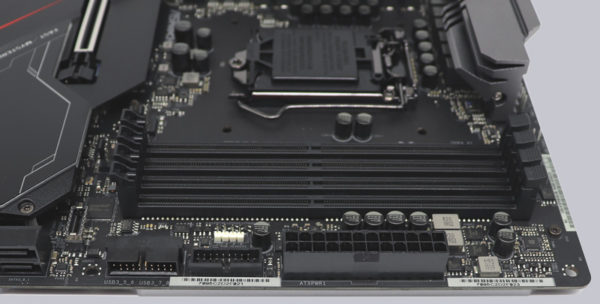 The picture shows the side view of the motherboard with the large heat sink on the MOSFETs. More precisely, it’s two heat sinks connected by a heatpipe.

To remove the MOSFET heat sink, first remove the I/O cover. Here you can see the wiring of the addressable RGB lighting. 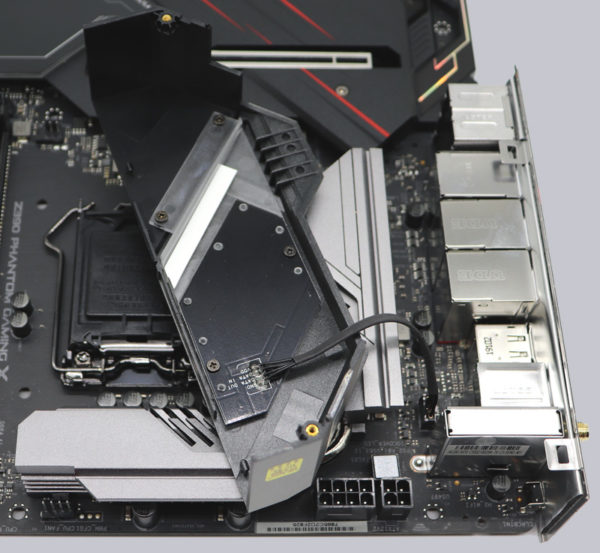 Here you can see the two de-mounted aluminium heat sinks, which were pressed onto the voltage converters by means of a heat conducting pad. 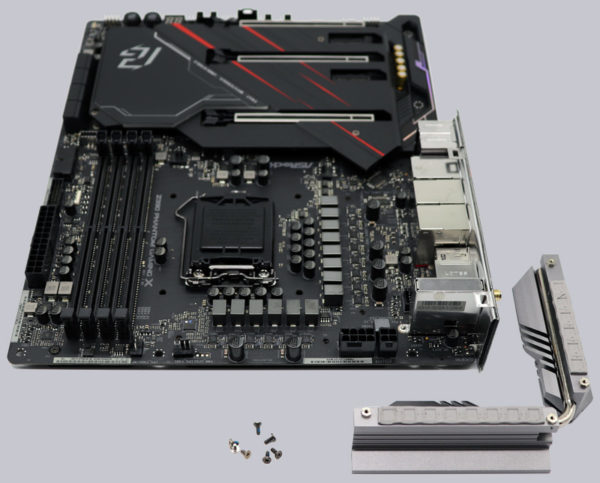 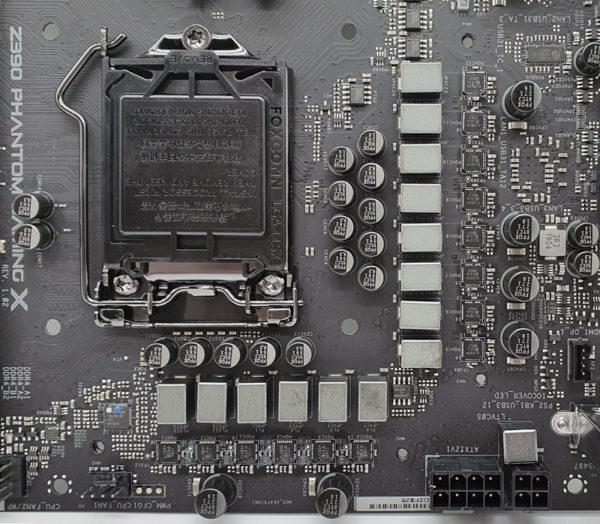 Here you can see again the MOSFETs on the 60A coils, which are responsible for the power supply of the Intel CPU. 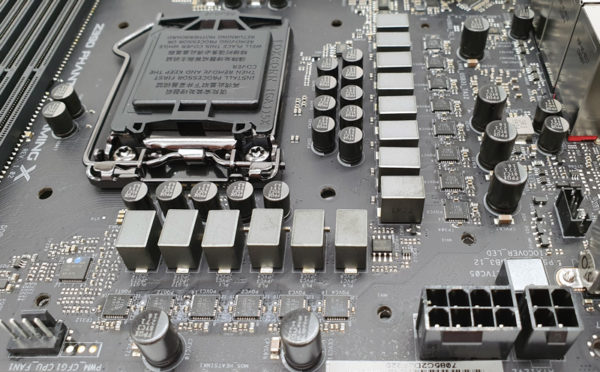 The ASRock Z390 Phantom Gaming X Board can be equipped with up to four DDR4 modules and can be upgraded up to a maximum of 128 GB RAM depending on the operating system used (see list). Here you can see a picture of the four DDR4 memory slots with Dual Channel Support:

The Intel LGA 1151v2 motherboard supports DDR4 memory modules and can be optimized in the BIOS for DDR4-2666 Quad Channel modules. The UEFI offers settings from DDR4-800 up to DDR4-8400.

The ASRock Z390 Phantom Gaming X features a Dragon RTL8125AG for 2.5 Gigabit LAN and is also equipped with an Intel I219V and an I211AT, which provides two additional 10/100/1000 network ports on the ATX panel. The two Intel LAN ports are teaming capable, WoL capable, offer LAN cable detection, support energy efficient Ethernet according to the 802.3az standard, PXE and more. All in all there are three LAN ports! 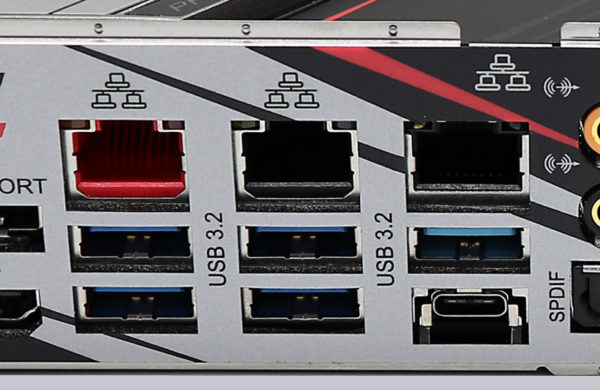 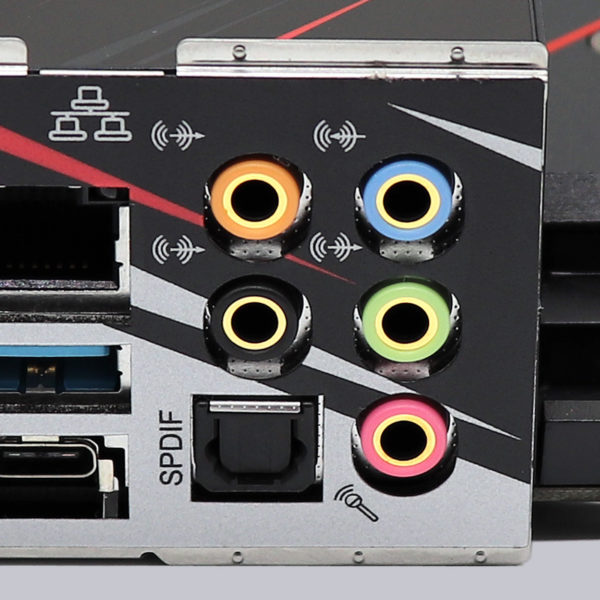 Now we come to the Intel LGA 1151 v2 CPU socket. The 8th Gen socket and the 9th Gen socket looks like the LGA1151 socket of the previous generation, but cannot be equipped with Kaby Lake processors like the Intel Core i5-7600K! A new Intel Coffee Lake processor must be installed for it to work on the Intel Z390 board. The socket is equipped with a lever that presses the relatively small CPU evenly onto the pins in the socket. As always during installation, do not touch the contacts or even bend the contacts in the base and during storage or transport, be sure to mount the protective cap on the base. If the pins are bent and the motherboard doesn’t work anymore, we help with words and deeds in Intel Forum. 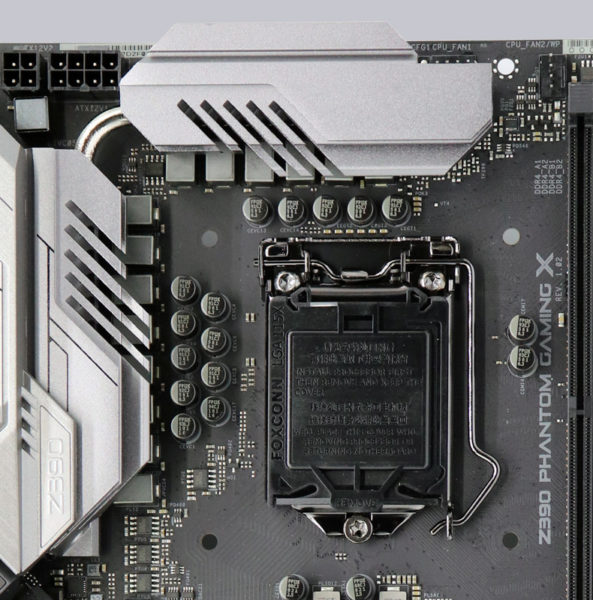 We have equipped the test system with this Intel Core i9-9900K CPU. 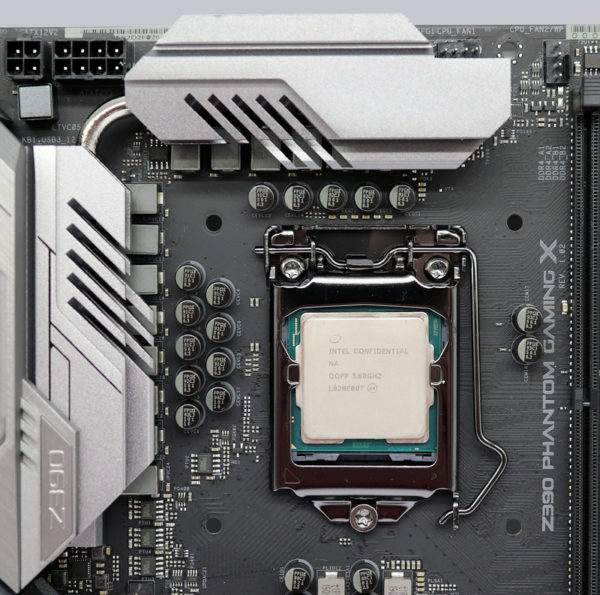 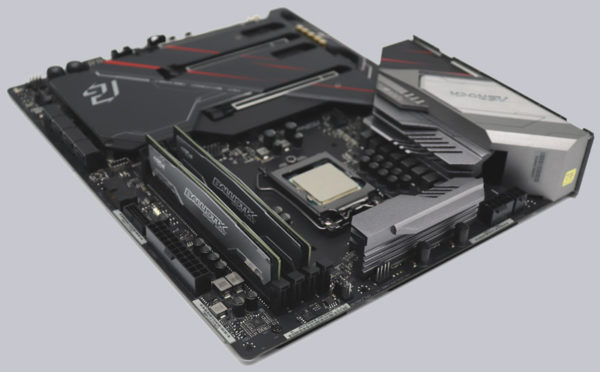 Here you can see again the two DDR4-2400 4GB modules from Crucial in the ASRock Z390 Phantom Gaming X motherboard. 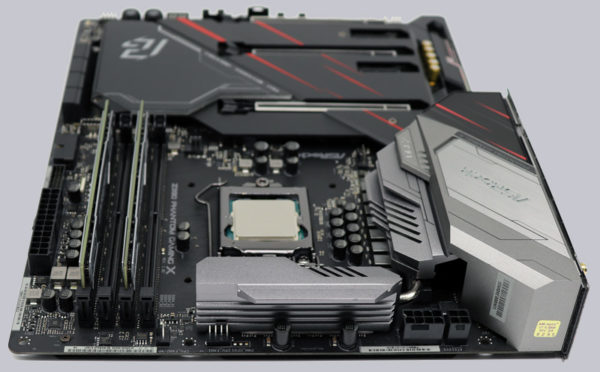 For tests with the new Intel LGA 1151-2 processors we use the Enermax ETS-T50 AXE DFP air cooler with ARCTIC MX4 thermal compound. On the following picture you can see the AMD AM4 test system with cooler and Icy Dock MB171SP-B Turbo Swap frame for quick exchange of the SSD and HDD. 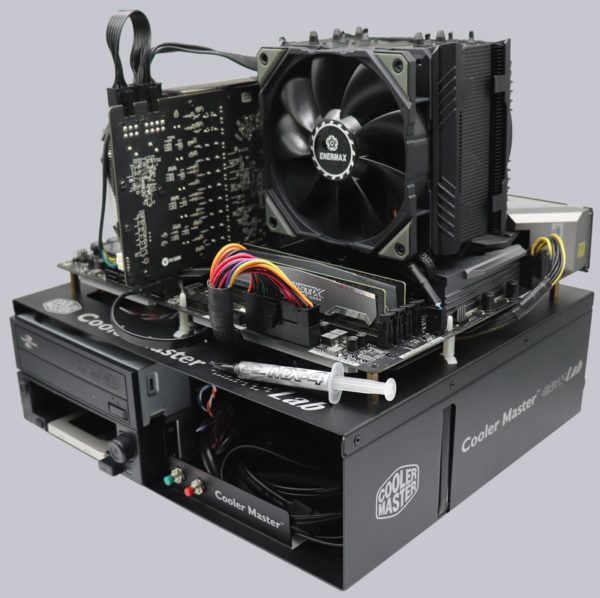 And here you can see again the finished Intel test system from above without graphics card for a better representation of the lighting possibilities on the chipset, under the motherboard and on the IO cover. 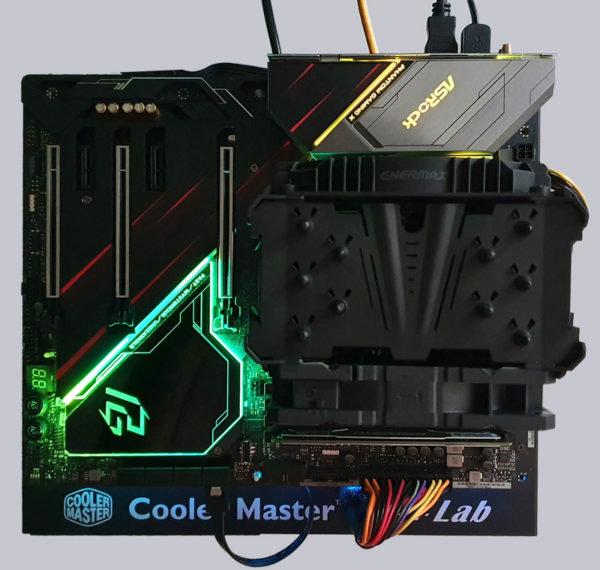 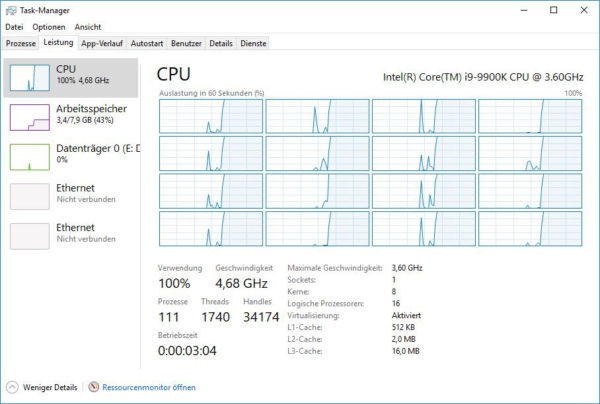 As you can see on the thermal image of the ASRock Z390 Phantom Gaming X PCs, the heat dissipation of the voltage regulators and coils through the two heat sinks is very good. 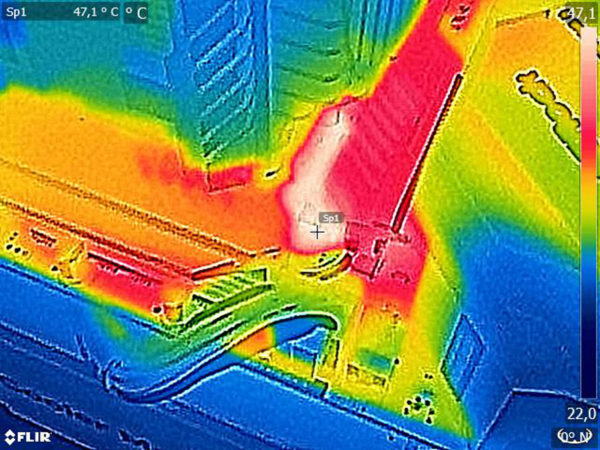 Here you can see again a thermal image of the whole ASRock Z390 Gaming X system under common load. 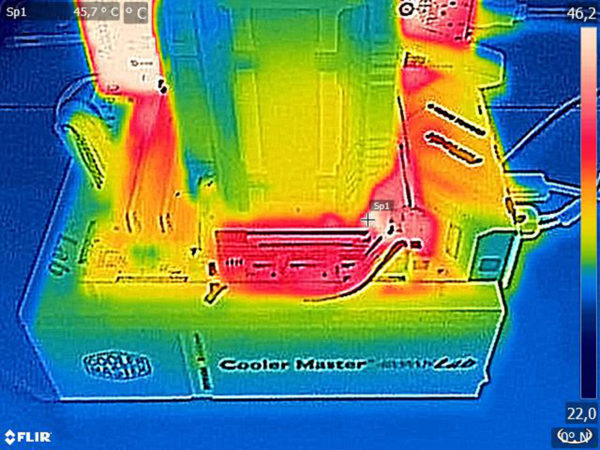