Fortunately, the Martrea Acute Angle AA-B4 already has a Windows 10 Home pre-installed, which is ready to use after a small Microsoft question and answer session! It is also pleasing that the Windows 10 installation has not been “garbaged” with any unnecessary software, but is delivered completely clean. 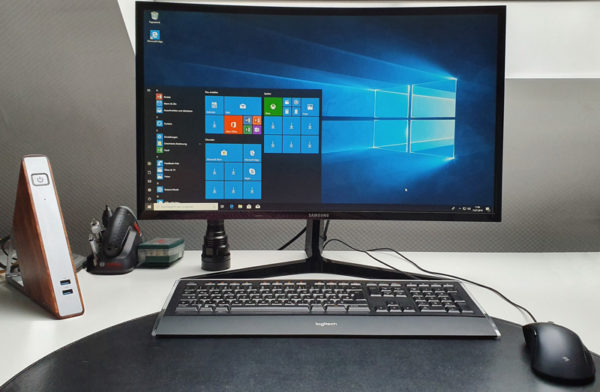 All components are also neatly installed in the device manager. 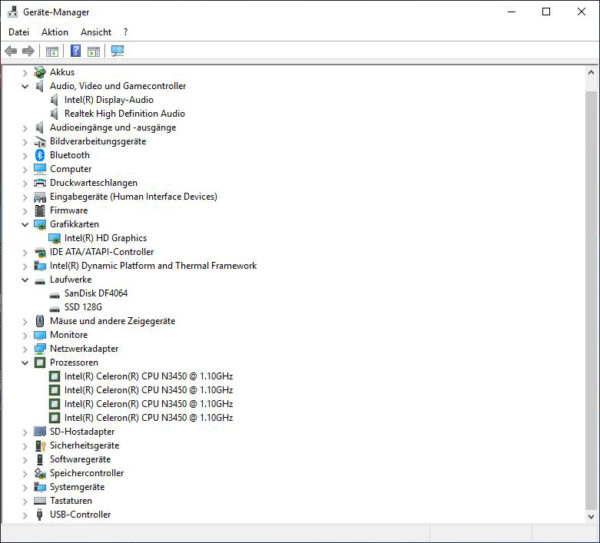 And although the 14nm Intel N3450 CPU with 1.1 GHz clock does not support Turbo Boost, there is a burst frequency that can clock just over 2 GHz depending on the number of cores used. 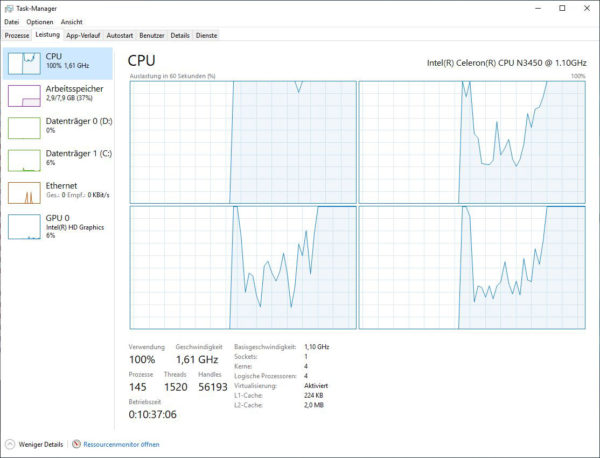 Here you can see a CPU-Z screenshot of the Intel Socket 1296 FCBGA Apollo Lake Quad Core CPU with 6W TDP. Intel virtualization technology and AES encryption are supported on the hardware side. 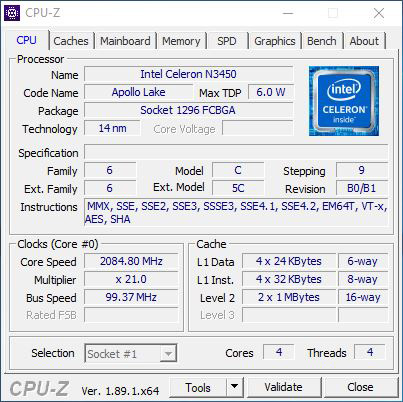 The complete boot process into Windows 10 takes about 22 seconds with the Intel Celeron N3450 processor. The slightly longer boot time is partly due to the fact that Windows 10 was installed on the somewhat slower Embedded Multi Media Card (60GB eMMC) and not on the somewhat faster SSD.

AS SSD Benchmark results of the eMMC
This brings us to the first test point, Martrea Acute Angle eMMC Performance, which we measured with the AS SSD Benchmark Tool. As already mentioned at the beginning a SanDisk DF4064 eMMC is installed, which has a maximum read performance of 263 MB/s and a write speed of 136.95 MB/s. The DF4064 eMMC has a maximum read performance of 263 MB/s. 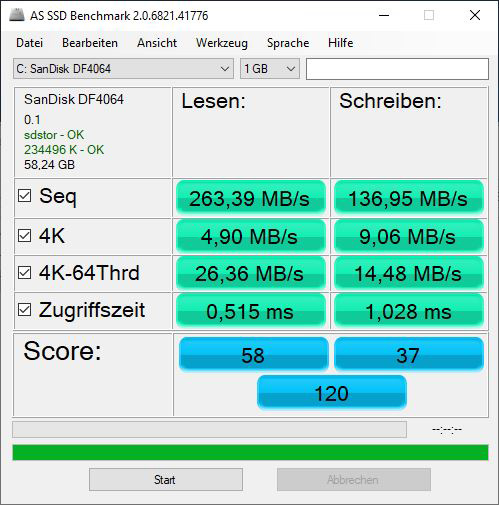 Here you can see again the SanDisk DF4064 benchmark values as IOPS (Input/Output operations Per Second). The total score is therefore just 120 points. 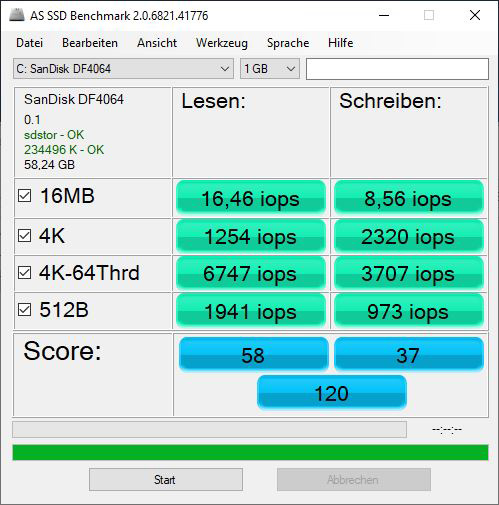 AS SSD Benchmark results of the SSD
The 120GB SSD of the Martrea Acute Angle Mini PC is fortunately much faster and delivers 465.34 MB/s read performance and 154.22 MB/s write performance in the AS SSD benchmark. 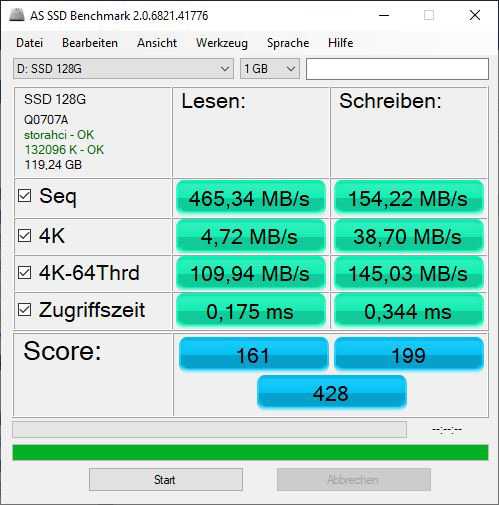 Here you can see again the SanDisk DF4064 benchmark values as IOPS. The 120GB SSD total score is at least 428 points. 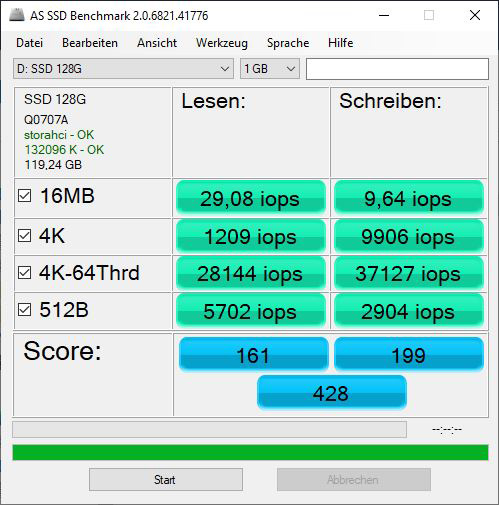 CPU-Z results of the CPU
In order to get a first impression of the Martrea Acute Angle CPU performance, the CPU-Z benchmark should not be missing. But if you consider that an AMD A10 7850K APU is about 225 Single and 757 Multi Thread Score or an AMD Ryzen 5 1600 CPU 364 Single and 3108 Multi Thread Score, you will soon realize that it is not a high performance CPU. 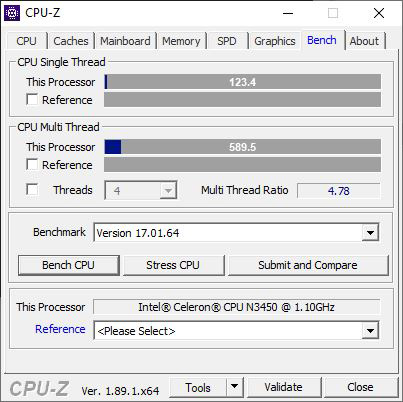 PCMark10 Benchmark Martrea Acute Angle total performance
Even with the PCMark10 overall performance, it quickly becomes clear with 1232 points that the PC is rather in the lower performance range. A high-performance AMD Ryzen 7 3700X system with GeForce 1070Ti graphics card is of course at significantly higher values of about 8529 points. 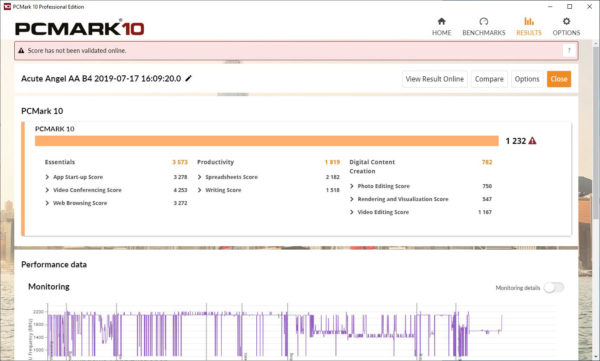 All in all, the Mini PC can be used for word processing, spreadsheets and for surfing basic pages, can be used for complex websites to a limited extent and cannot be used for current game titles. Of course no Gigabit LAN or fast WiFi helps, but as we will see on the next page, this also has advantages.

Unfortunately there are no Intel N3450 Apollo Lake overclocking instructions on the internet so far, so we’ve taken a closer look at this topic to give users of slower PC systems a bit more performance and even programmed a small tool for it. Here it goes to the Intel N3450 Apollo Lake OC tutorial, with which we could at least get some more overall performance out of 😀