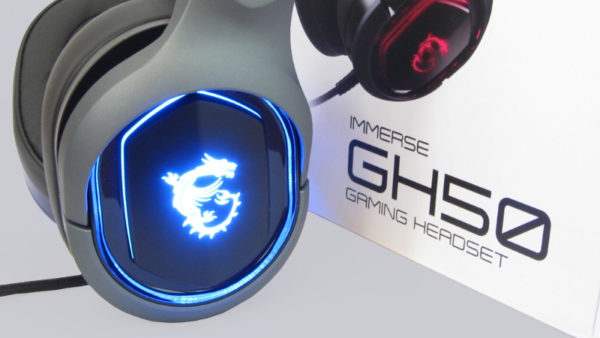 The flexible Immerse GH50 headset is already aimed at gamers according to MSI’s nomenclature, which comes with certain, perhaps sometimes cliched expectations for the target group. No one should expect exceptionally accurate jazz headphones here, and we would also strongly advise against purchasing this product for semi-audiophile music enjoyment. The slightly more expensive Sennheiser 599SE already moves in this direction, albeit without headset ambitions.

Instead, MSI offers the definable clientele a high degree of flexibility when it comes to setting the RGB lighting and the free choice to unplug the microphone in a quiet minute if it bothers them due to the lack of adjustability in front of the face. These product features promised by MSI were simply fulfilled in full!

The product ranks as a hybrid with effect functions in an application field that consists of many sub-disciplines, as the extended Practical testing showed. The sound’s three-dimensionality is not convincing in music reproduction, and yet gamers need the isolation of the closed construction in tournaments to not have to cede the information transmitted in the voice chat to the enemy seat neighbor. The musical shortcomings are therefore explainable and understandable, since an open stage like in a 599SE would have a completely counterproductive effect here. The use of the P9 Signature also showed how even the most expensive headphones can suffer from comparable spatial deficits. That model is supposed to meet a much higher standard, which is not the case with the Immerse GH50.

So, let’s explore the “fun factor” of the MSI product that is relevant for the rating: It is actually incredibly fun to go through the settings in the MSI Center and the effects should not be called much more than a “game” anyway. 7.1 sound is initially a buzzword that cannot be qualitatively implemented in this price range, and every potential buyer has to decide for himself whether the vibrations are “necessary”. Working with a rudimentary equalizer as well as the variable room size of the 7.1 effect should keep one or the other gamer busy and entertained in a positive way. The connection and control of other devices in the MSI Center, on the other hand, centralizes the user’s control options.

The quality of the USB cable with the corresponding jacket and strain relief was very convincing. There is not the slightest complaint about the cable length and flexibility. As already mentioned, the cable including the volume control should also be modular in case it gets damaged. At least the centerpiece for volume and effect control didn’t seem to be of high quality.

If a product below 100 Euros relies mostly on plastic, this is forgivable and the looks correspond to what a teenager would want to wear on his head. The earphones are comfortable thanks to the comfortable earpads. The headset’s folding function plays an important role for transportability, although stowing the permanently mounted cable is a bit problematic here.

In the end, the Immerse GH50 remains a proverbial playful headset for communicative use on virtual battlefields. Moreover, the product is in a very affordable price segment, which certainly suits the young gamer. As soon as music is turned on, a pair of moderately priced PC speakers should be preferred.

Here you can order the MSI Immerse GH50 headset at a reasonable price.