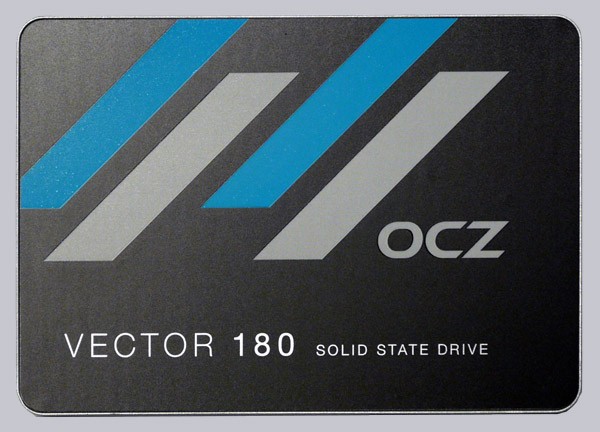 On the back of the OCZ Vector 180 2.5-inch SSD you can see a label with a few technical data and the pre-installed firmware version. You can see both SATA3 connectors for power supply and data in the picture on the left. The SSD connector is identical to conventional SATA hard drives and a SATA3 SSD can be operated with a lower speed at an SATA2 interface: 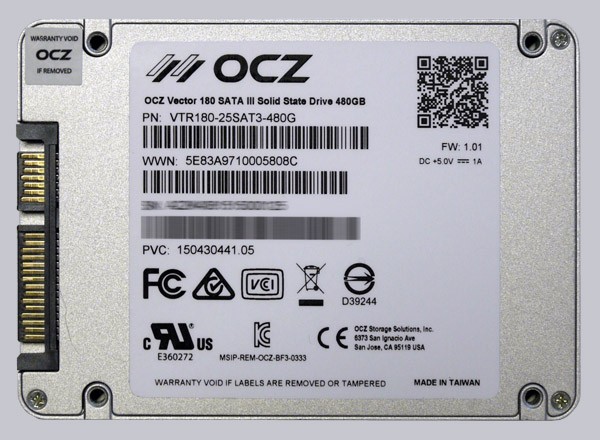 And here is a picture of the assembled OCZ Vector 180 in the 3.5″ mounting frame: 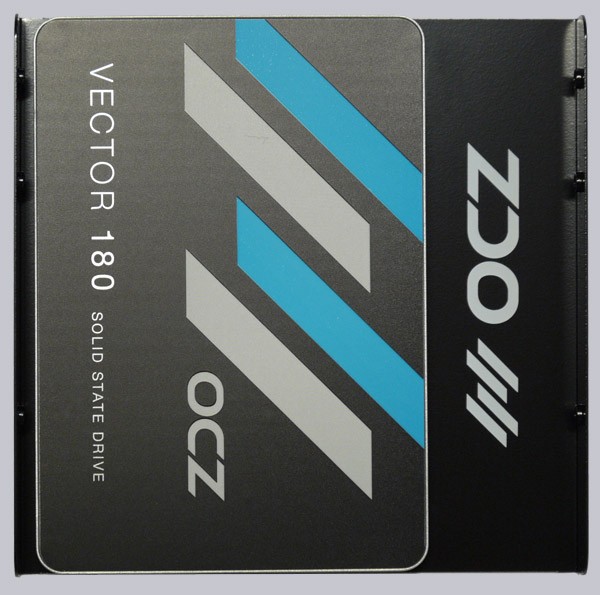 Opening the OCZ Vector 180 is very easy since OCZ still screwed their SSD enclosure and not without screws as we have seen at the latest Crucial MX200 and BX100 SSD. Here you can see the SSD PCB, which has been fixed even inside of the enclosure with screws, along with thermal pad on the controller IC. 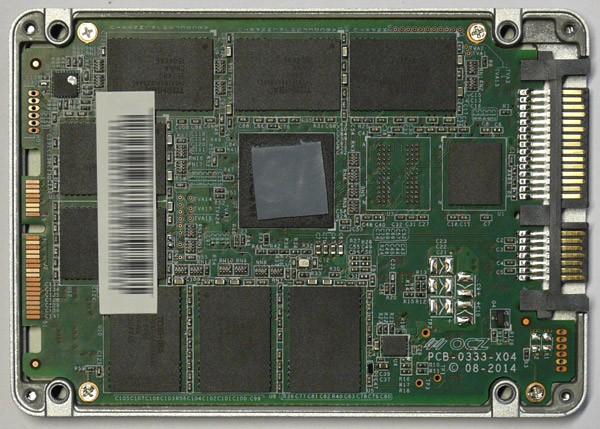 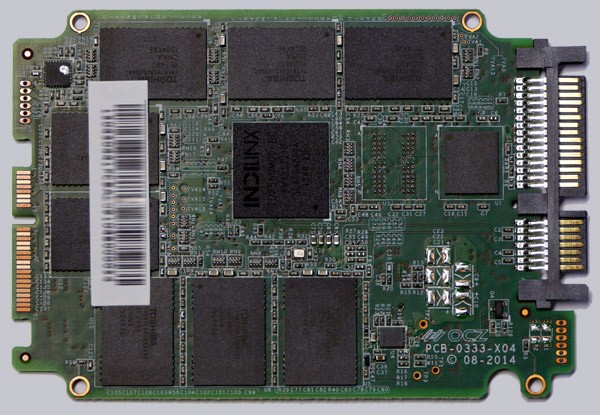 On the back of the board are eight more Toshiba A19nm NAND modules of the SATA3 SSD with 480GB capacity, as well as a second Micron DDR3L-1600 cache module.

Another special feature is the red SMD component, a so-called backup capacitor, causing also a somewhat higher power consumption. The large capacitor is part of the Power Failure Management Plus (PFM+) feature. The PFM+ technology protects data during a power outage, which stored in the Flash memory or were just written and also prevents the so-called Bricking syndrome, where the SSD table no longer accessible by a corrupted metadata table: 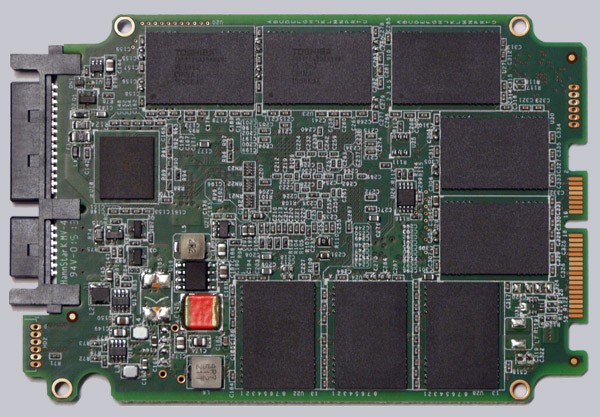 After the installation of the OCZ SSD Guru tool … 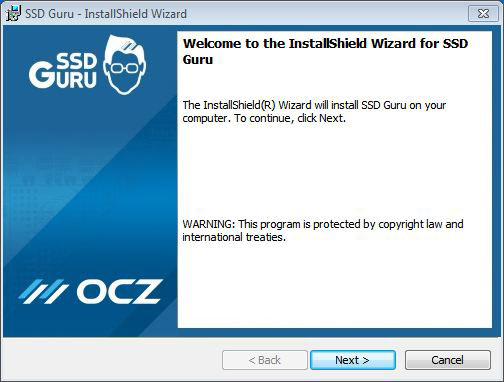 The entry page of the OCZ SSD Guru tool shows the installed OCZ SSD, the condition of SSD health, details about the SSD and the system, as well as the SMART data. It also shows if the SSD is connected to the correct controller. 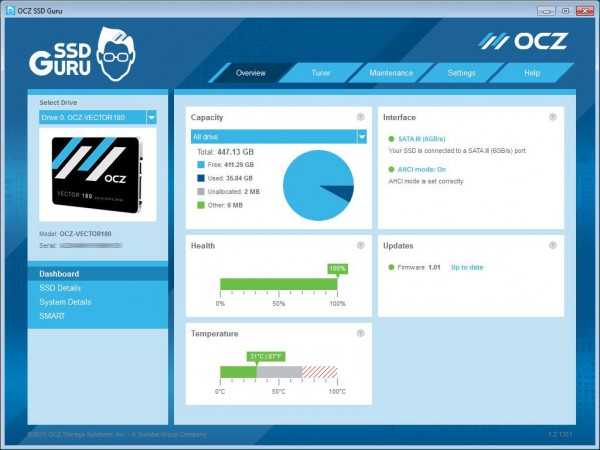 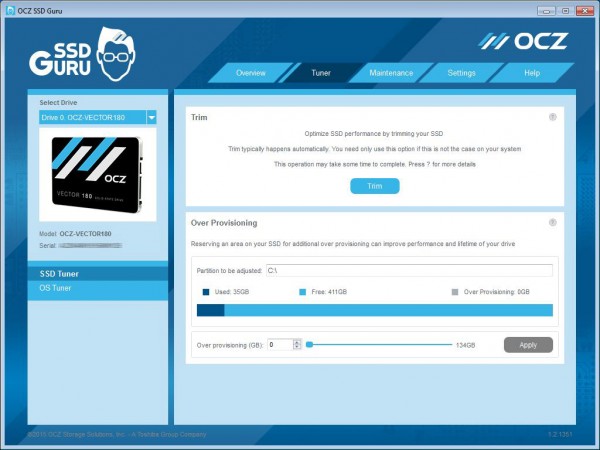 Last but not least, there’s even a built-in secure erase function (see SSD secure erase guide). Now we come back to the firmware update. Once a firmware update is available, you can download it on this site over the Internet (Update from Web) and update afterwards. However, users who don’t like to (or are not able to) connect this PC directly to the Internet have drawn the short straw, because they get of course a network connection error. There is a function to update from the local PC, but the OCZ firmware files are officially not available at the OCZ support page. 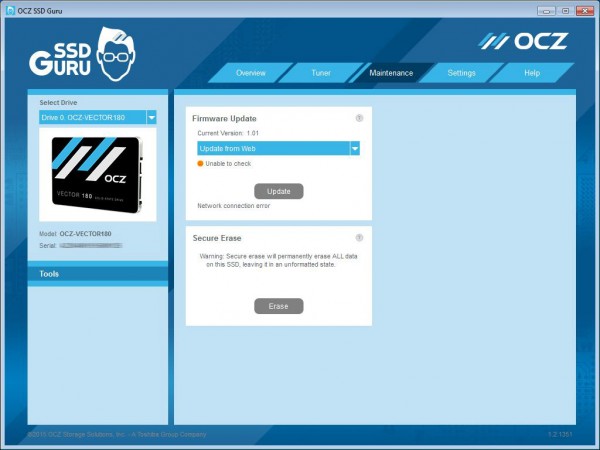 So one must offer the tool Internet access, in order to update the OCZ vector 180 SSD firmware and for getting the information that the firmware is already up-to-date (up to date). 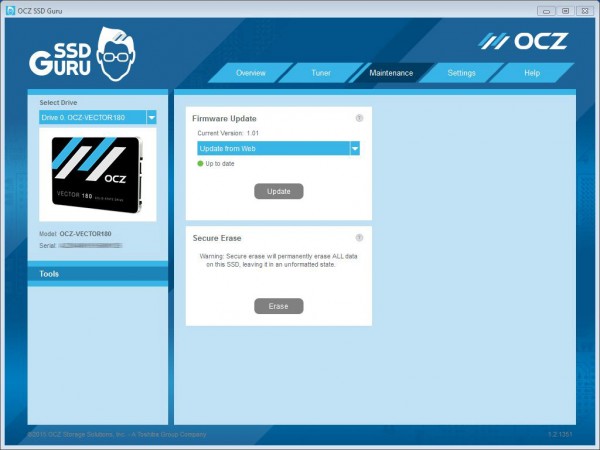 The OCZ SSD Guru tool offers many additional features, enabling a comprehensive management and monitoring of the OCZ SSD.