Let us continue with the benchmark results. SATA3 drives are tested with an ASRock 890GX Extreme3 motherboard and test results of M.2 modules are performed using an ASRock Z97 Extreme6 motherboard. At present, Microsoft Windows 7 Ultimate Edition is used as the operating system.

Although you should operate the SSD in AHCI mode, we have spared no effort to run all benchmarks additionally in IDE mode. The total score in the IDE mode (indicated by pciide below firmware “1.01”) reached 378 points, whereby in AHCI mode the result is more than double that.

Here is a Snipping screenshot of AS SSD benchmark values (SATA3 IDE): 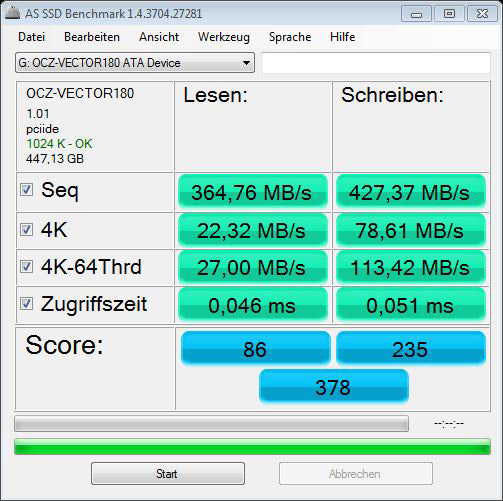 In AHCI mode also another result beneath the read performance was much higher than in the IDE mode and that is the important value “4K-64Thrd”. 4K means that small 4K blocks are read and/or written and with the 4K 64Thrd this is distributed on 64 Threads at the same time. Thus the benchmark program simulate for example a typical program start.

Because the weighting of this value in the AS SSD benchmark tool is very high, the total score in AHCI mode is more than twice as high with 910 points. The Crucial BX100 500GB SSD reached 803 points and the Crucial MX200 500GB SSD reached 882 points – each in AHCI mode, using the same test system. The maximum usable capacity of the OCZ Vector 480GB SSD is with 447.13 GB slightly lower than the Crucial BX100 and MX200 500GB SSD, which are offering 465.76 GB.

An additional PCMark8 test that is not included in the assessment, confirmed our assumption with very high results that mainly applications can benefit of the OCZ Vector 180 performance.

Tip:
Who is now thinking about changing its SATA port from native IDE and/or legacy IDE to AHCI in the BIOS, should change first for example (if possible) only one part of the SATA port, where the drive with the operating system is not installed. Because if one like to save the new Windows installation, one must install the hard disk controller driver before changing SATA mode from IDE to AHCI – alternatively there are also Registry entries for it. If you like to upgrade from HDD to SSD, you should not copy the content 1:1 only with a tool like Norton Ghost or Acronis Backup. It is better to install a fresh Windows 7 or Windows 8 or adjust at least the SSD Alignment. We help you with questions to this topic or all other PC related questions at any time 24/7 in our PC Forum.

Here is a Snipping screenshot of AS SSD benchmark values (SATA3 AHCI): 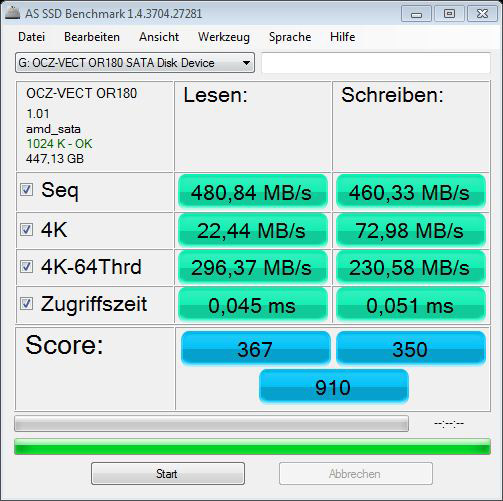 And here is yet a Snipping screenshot of AS SSD iops results (SATA3 AHCI): 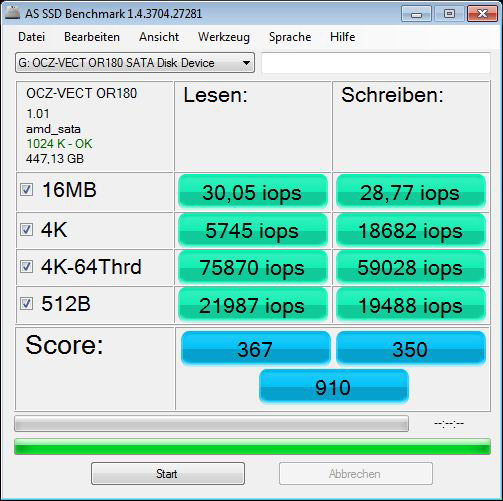 Here is a Snipping screenshot of the AS SSD copy benchmark values (SATA3 AHCI): 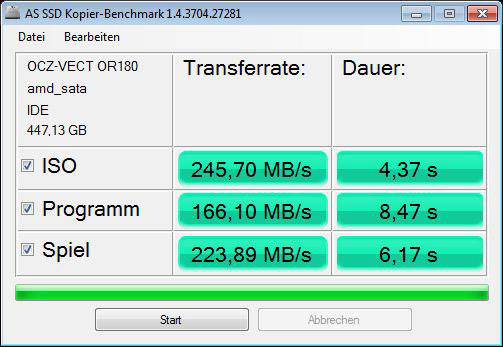 The comparison of the AS SSD benchmark results is extended with each new HDD/SSD test. Here you can see some SSDs in comparison to the OCZ Vector 180 480 GB 2.5″ SSD, and the graphic will be updated periodically with new SSD drives. At the moment the top of total AS SSD scores is lead from a Plextor M6e 256GB M.2 SSD, closely followed by the Crucial M550 512 GB mSATA and M.2 SSD – then already followed by this OCZ Vector 180 480GB SSD. 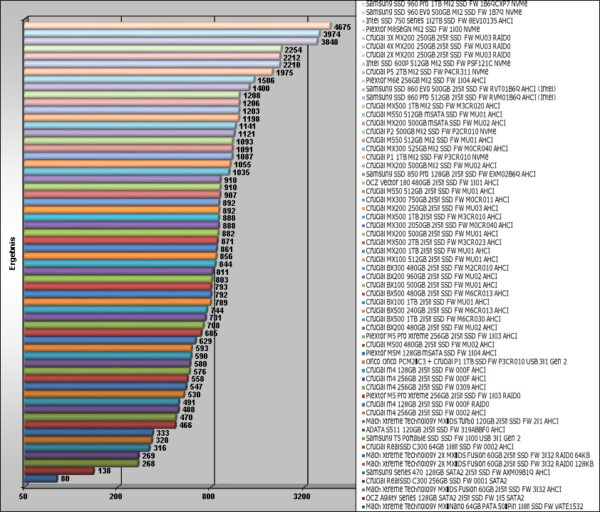 ATTO disk benchmark results …
The ATTO disk benchmark values gives a very good overview about the write and read rate on different file sizes. These values are maximum ratings, which are different to the previously continuous transfer rate benchmarks, since this benchmark may even reach a higher overall performance with slower SSDs.

At the OCZ Vector 180 480 GB SSD is the reading speed (green) from a transfer size of about 128KB higher than the write speed (red) and reaches the maximum read speed of 540275 KB already at a transfer size of 256KB. We found the lower of the 2048 KB and 64 KB write values very unusual, since they occurred in multiple measurements with different systems. But OCZ assured us that this phenomenon rarely perceived in daily usage and is merely a quirk in the synthetic test.

Here is a Snipping screenshot of the ATTO Disk benchmark values (SATA3 AHCI): 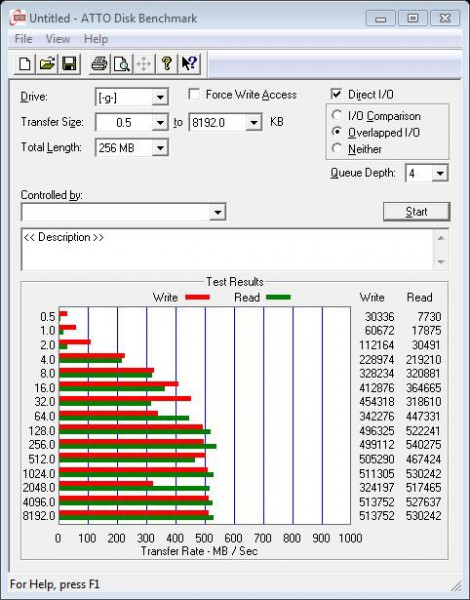 These ATTO disk benchmark values are compared with a small transfer size of 32KB and a large transfer size of 8192KB. The bar chart already includes a comparison to some SSDs and HDDs, where the OCZ Vector 180 rather joins in the midfield. 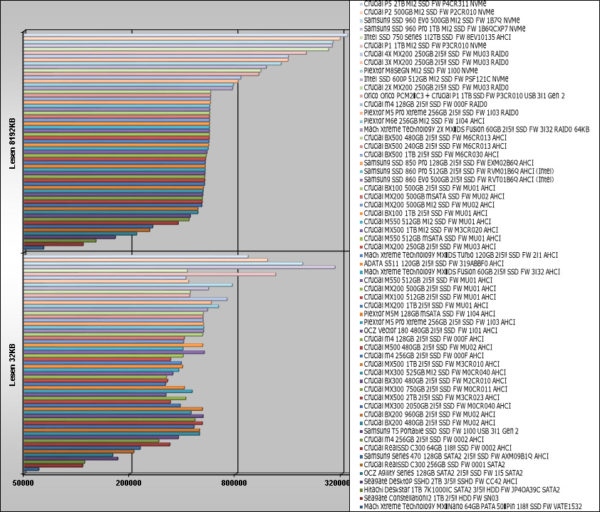 The sequential read values of 460.6 MB/s are relatively high, but in CrystalDiskMark the Vector 180 SSD has especially high 4K-QD32 values and enormously high sequential write values of 482.8 MB/s. 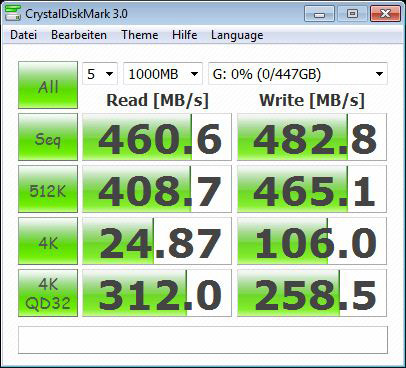 The following diagram shows the CrystalDiskMark results once again compared with other SSDs and platter drives, which are extended step by step. In the CrystalDiskMark comparison one can see significant differences between the to-date tested of the Solid State Drives and Hard Disk Drives, where the OCZ Vector 180 480 GB SSD joins in the midfield at the closely-spaced results. 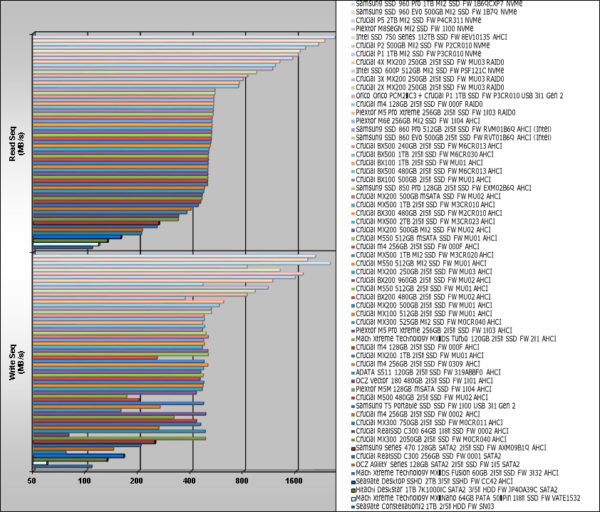 HD Tach result …
With HD Tach one can measure the gradient of the performance, but the SSD transfer is not comparable with a conventional HDD. New logical NAND cell access of the SSD controller results like some other equal designed SSDs in strong varying values with the latest HD Tach Version 3.0.4.0 version, which is written for hard disk drives.

Here is a Snipping screenshot of the HD tach benchmark values: 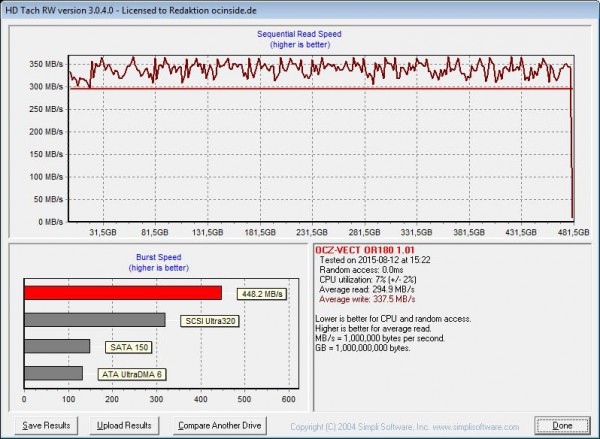 As in the previous benchmarks, the average read performance of the OCZ Vector 180 480 GB SSD could not reach the enormous speed of the fastest SSDs in HD Tach benchmark. 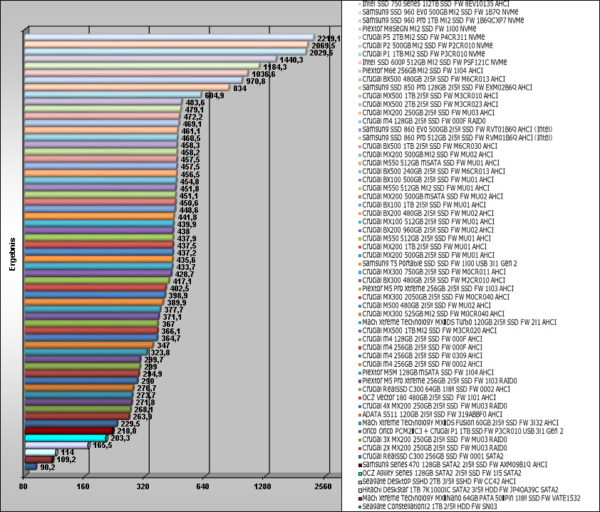 The average access time of the OCZ Vector 180 480 GB SSD is in SiSoftware Sandra with 22us extremely low and the drive index of 536.14 MB/s is very high

In the write performance measurement, the average access time of the OCZ Vector 180 480 GB SSD in SiSoftware Sandra is at extremely low 24us and the drive index reached very high 492.79 MB/s.

In SiSoftware Sandra, the OCZ Vector 180 480GB SSD is even in the upper range of the sequential read rates. 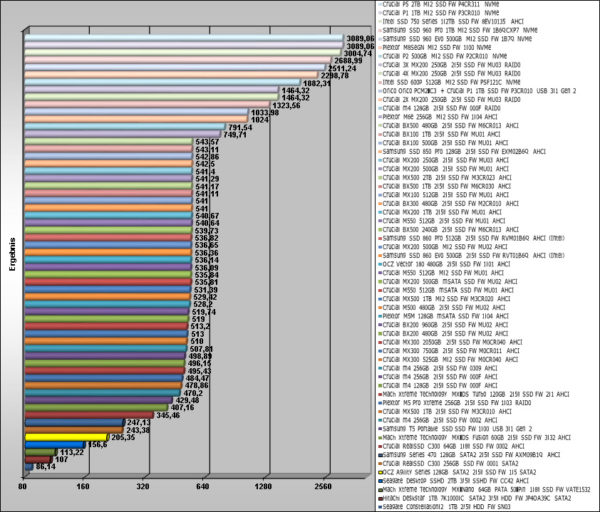