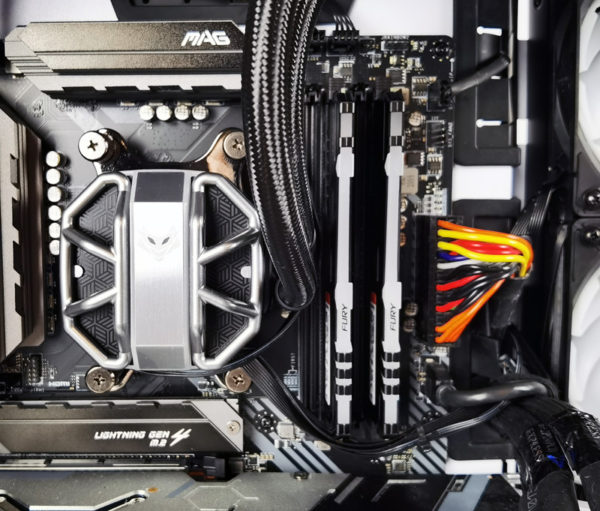 Let’s now move on to the test system where the Nitro+ S360-A can show what it is capable of.

The well-known MSI Center is used for the control. Since most AIO pumps are not controllable and it also does not necessarily make sense to control the pumps, we set the pump in the MSI Center firmly to 100%. With a stated volume of 20dBA, it cannot be heard coming out of the system even at maximum speed.

The CPU was loaded with the program Prime95 in version 29.4 build 8. The system was always loaded until no temperature increase was noticeable for 5 minutes. 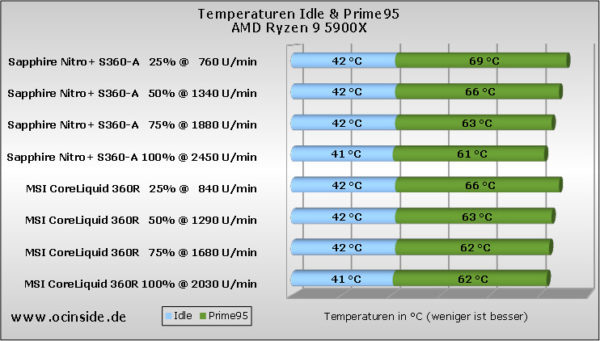 We tested the Sapphire Nitro+ S360-A against a MSI MAG CoreLiquid 360R AIO compete. In the test, we see a fierce battle in which both All in One water cooling do not give each other anything, because both water coolingen offer almost identical performance.

Actually, high speeds are not needed to keep this powerful CPU cool without any problems, as there is just 8° difference between 25% and 100% and even only 5° between still silent at 50%. You don’t even need any additional software to adjust the fans, as you can do it through the motherboard/BIOS.

The two coolers are also very similar in terms of noise and at least subjectively equally quiet or loud, even though the Sapphire AIO’s fans can spin about 400 rpm higher. The pumps are both inaudible even at 100% from a closed system.

For the first CPU all-in-one water cooling from Sapphire, Sapphire has done a really good job here and the workmanship of the Sapphire even makes a much better impression for us than that of the MSI CoreLiquid 360R.

The cooling result is impressive, because keeping an AMD Ryzen 9 5900X in check so well is not easy. The 7nm lithography technology of the AMD CPU is noticeable here, which has to dissipate the heat via a much smaller DIE (here even 2 + IO DIE).