It’s not easy to test earphones, because they behave differently concerning sound and battery time in different conditions. Therefore this section might be partly subjective. But we tried to simulate typical using patterns.

Before any form of sound output you need to connect to a Bluetooth device. Nowadays mostly smartphones, but also some PCs, laptops or TVs are capable of this connection type.

There were no issues connecting the Sudio Vasa Blå to smartphones. We tested this on a Nokia Lumia 735 with Windows 10 mobile and a LG G4 with Android 6.0. With enabled Bluetooth the earphones were used as the main output device as soon as we switched them on.

Our PC setup with Windows 7 and Bluetooth 4.0 support through the ASRock Z97E-ITX/ac mainboard had some difficulties though. Firstly you need to make sure the Bluetooth drivers are up-to-date. After the first try to connect the devices we found the Sudio Vasa Blå in the devices menu. But only after restarting the PC you could establish the connection in the Bluetooth devices menu. After this step the earphones appeared as a playback device.

We strongly advice to deactivate the microphone feature. Because if this is turned on Windows 7 will recognize this as a wireless headset, which it basically is, but unfortunately Windows will change to a different Codec optimized for phone use which will lead to a horrible audio quality. After you have set up everything, you just have to turn the Sudio Vasa Blå on and chose them as playback device.

As mentioned before, the Sudio Vasa Blå only have three buttons which have multiple functions and can therefore be a bit confusing when using the device for the first time.

During everyday use the controls turn out to be pretty intuitive though. The middle button is your best friend while using these earphones. It’s main function is play/pause, when pressed longer the device tries to establish a connection and after a few seconds of pressing it turns the device on/off.

The two volume buttons can change the track when pressed longer.

The small display is pretty confusing though. A red and a blue LED show you the device status. while in use the display lights up blue every 5 seconds. While in connectivity mode it’s a fast blue flashing. Permanent blue light indicates a completely charged battery. The red light on the other hand indicates several hours before the battery is empty that you might consider recharging. While charging it lights up permanently and when turning the device off you get a short red flashing.

In short, just ignore the display most of the time. A change of display indicates some kind of event. 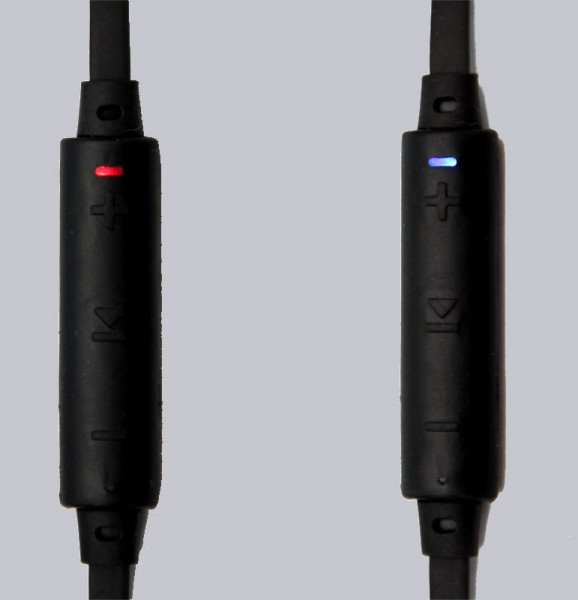 We would have preferred an additional display and maybe even a switch at the battery compartment of the Sudio Vasa Blå.

Most of the data turned out to be plausible during our test. A range of 10m was possible as long as there were no obstacles. When using the earphones inside, only a second concrete wall and a total distance of about 8m led to sound disruptions.

When it comes to battery time we even managed to play music 50 minutes longer then the indicated 8 hours. This might be due to a relatively low volume.

The charging time was also correct with 120 minutes for charging the completely discharged battery. We used an ordinary smartphone power supply as Sudio did only supply the cable for charging.

These kind of earphones will be most likely used for listening to music or a movie here and there. Therefore we focussed on these areas.

So, what did we find? The sound favors the mids a bit, meaning voices sound a bit more present and clear. If you like strong bass you need to use an equalizer to push this a bit. This also becomes clear when watching movies as a bit of atmosphere gets lost with the basses. Because of this clear but sometimes a bit sterile sound you can listen to music without much disturbance, but real pleasure won’t come upwith these earphones.

It’s like with nearly every in-ear earphones. The right size of sleeve is most important for the fit.

We noticed that despite its symmetrical design the cable has a tendency to shift to one side and therefore pull on one of the ear-pieces. The supplied metal clip definitely helps with that when used on the collar.