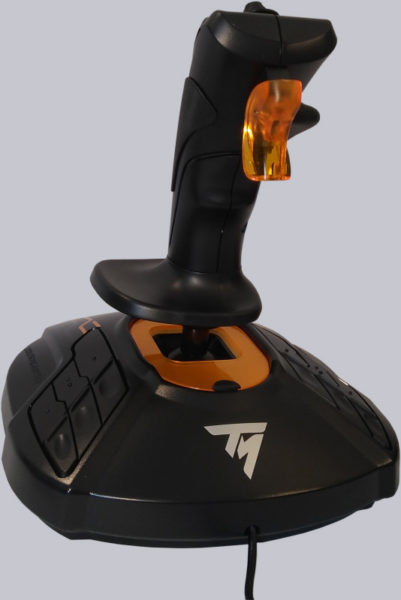 The FCS Flight Stick alone is already an impressive piece of technology. The wide but relatively flat base with a total of 8 non-slip rubber feet promises a safe stand of the almost 1kg heavy flying stick. In addition, it is also possible to mount the T.16000M on a rack, in the bottom there are two corresponding threaded holes. The workmanship is altogether high-quality and extremely stable. The design in black-orange is of course always a question of taste, at least we like it very much. 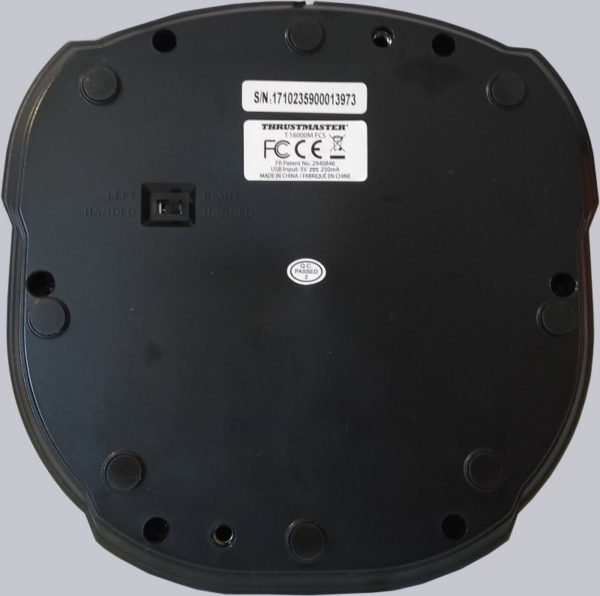 The FCS Flight Stick offers a total of 4 axes, in addition to the normal joystick movement on the X and Y axes, the handle can be rotated to the left and right. This allows the Rudder/Giering control directly from the joystick. Another axis is provided by the throttle on the base. 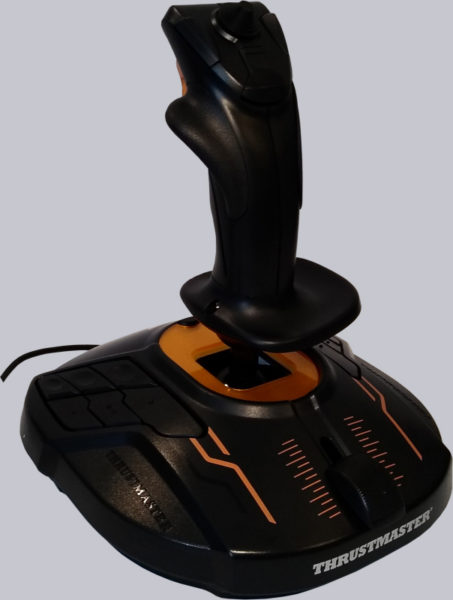 The handle has a total of 4 buttons and an 8-way cool hat. The trigger made of transparent orange plastic triggers clearly audibly and quite hard after quite a long 2mm shift, which we didn’t like as much. We would have preferred a quiet, precise switch with a short travel. In comparison, the three upper keys are very soft and without a clearly noticeable switching point. The button under the CoolHat is a bit difficult to use. To shift with the thumb, you have to loosen the grip of your hand, which costs precision in more critical situations. The easiest way for us to do this was with the thumb joint.

The 8-way CoolHat is usually used in simulations to change the viewing direction (Perspective Of View – POV). It reacts quickly and precisely. 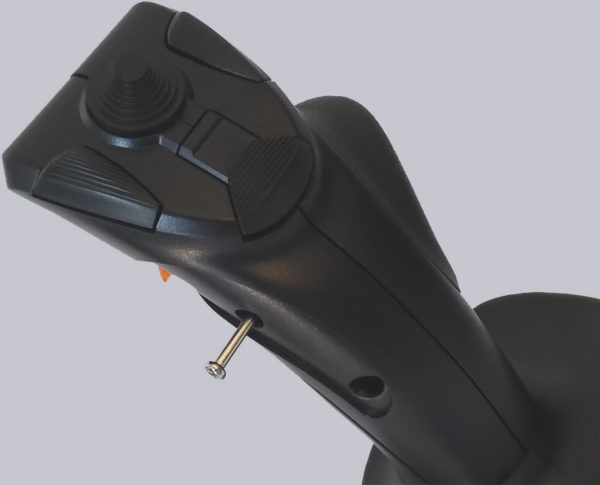 The POV switch has no additional push button function. 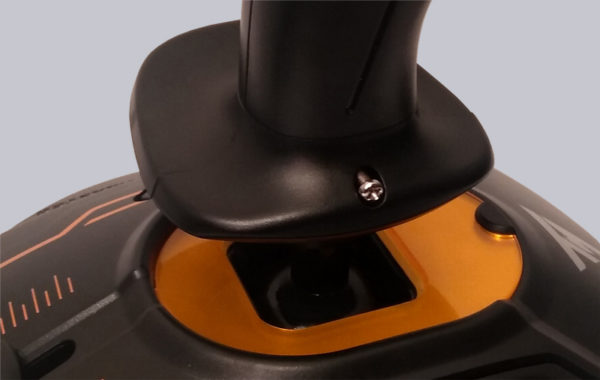 The joystick is suitable for both left- and right-handed users. The palm and thumb rests can each be loosened with a single screw and moved to the other hand. In addition, the stick can be switched between left and right-handed via a switch on the base plate, … 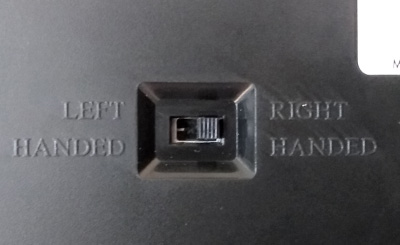 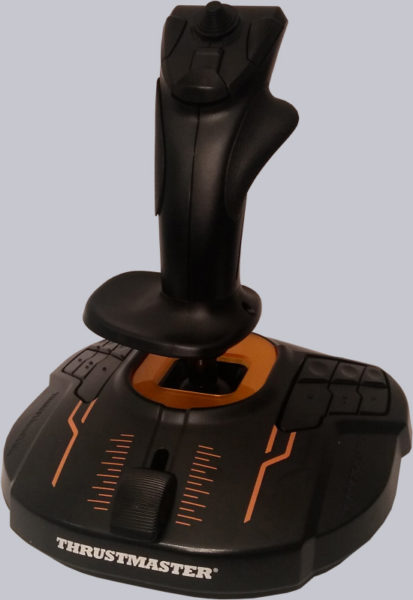 The Flight-Stick is designed for normal to large hands. It lay very well in our hands, but a test person with very small hands who was called in for a short time had difficulties finding a comfortable hand position and to reach all keys well.

The suspension of the stick is very tight thanks to the 2.8mm thick spring. This means that the stick always finds its neutral point quickly, but very fine movements require a good instinct. The spring pressure is very even over the entire range of motion.

The joystick can also be turned to the left and right in a range of +/- 20° and thus offers a third control axis that can be used for rudder control/ yaw ring, for example. The suspension of the pivot axle is also relatively tight and finds its neutral position quickly and reliably. 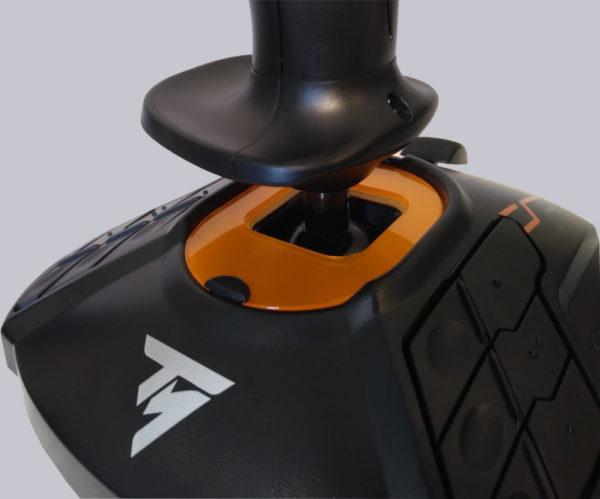 On the base there are a total of 12 freely assignable keys on the left and right side of the joystick. The front keys have recesses for the fingertips, the rear keys have touchable dots so that you can find the right key without looking. But you have to take either your hand from the joystick or the other one from the TWCS throttle, if you use it.

The FCS itself has its own throttle directly behind the joystick. This has a relatively short throttle of 20mm. The throttle is relatively smooth-running but, like the buttons on the base, can only be operated with a second hand. 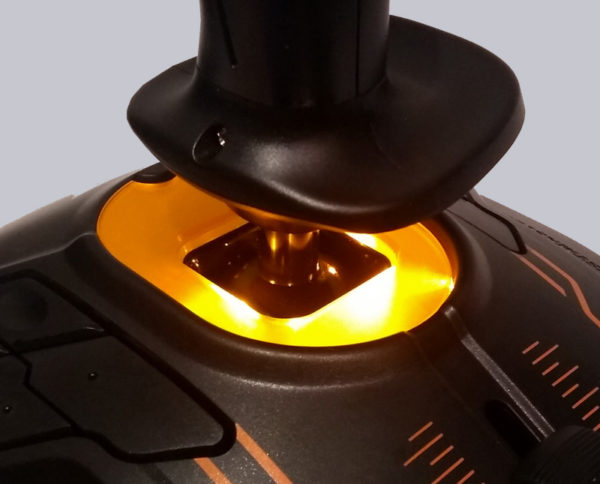 As a special extra Thrustmaster gave the T.16000M an illumination. The foot plate of the embroidery holder is made of orange plastic and is illuminated from below when the joystick is moved.

The acronym stands for Hall Effect AccuRate Technology. Thrustmaster is a patented sensor system consisting of 3D Hall effect sensors which are built into the joystick. With these the T.16000M has a resolution of 16bit, i.e. approx. 16000×16000 position steps – hence the name of the FCS. This is much more than most other systems have to offer in terms of resolution and this precision/sensitivity was also found in practical testing.

As the name Weapon Control System suggests, the TWCS is much more than just a left hand throttle. Together with the Flight Stick, the TWCS forms a HOTAS Hands On Throttle And Stick System – a control concept in which all the control elements essential for flight performance are mounted on the joystick and throttle. The concept originates from the real world and is an essential point for increasing flight safety. 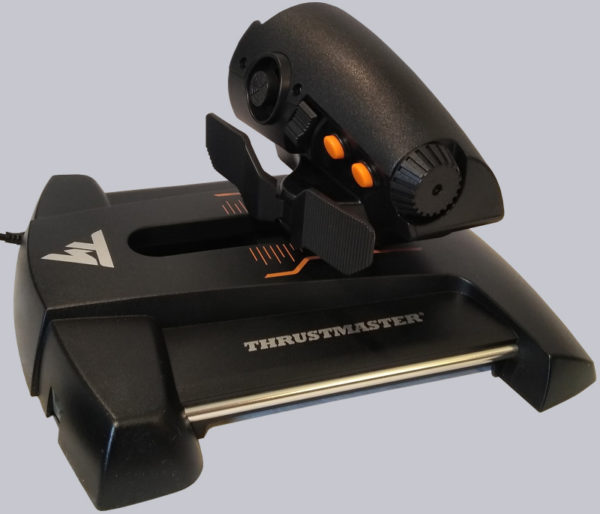 Accordingly, the TWCS offers a large number of input keys and controllers, with a total of five axes and fourteen gear knobs.

The most prominent axis is, of course, the throttle control. Thrustmaster uses a special slide rail system (S.M.A.R.T.) with a really buttery guide. The resistance of the slide rail system can be adjusted to your own preferences with the enclosed Allen key. 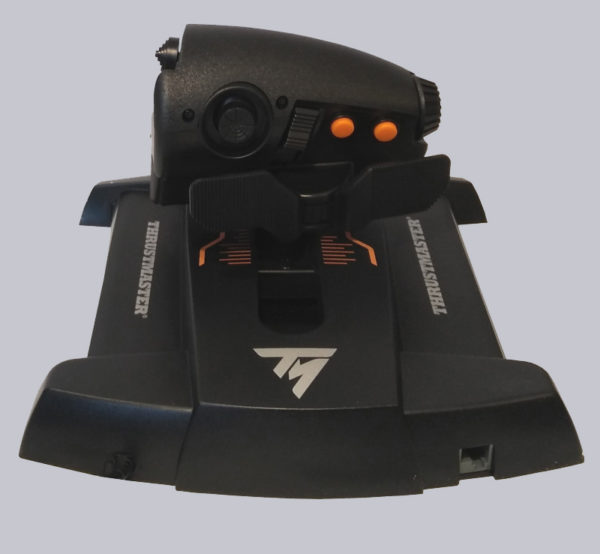 The wing rudder / toggle rudder at the front of the pushcart offers a further operating axis. There are also two simple buttons, a two-way (up/down) button and a push-mini-stick, which offers two more axes and by pressing another button. All elements are easy to use for a normal large hand, a very narrow hand also has problems here. On the left side of the push car is a rotary control, which can be easily reached with the little finger with a little practice and is the fifth axis of the TWCS. 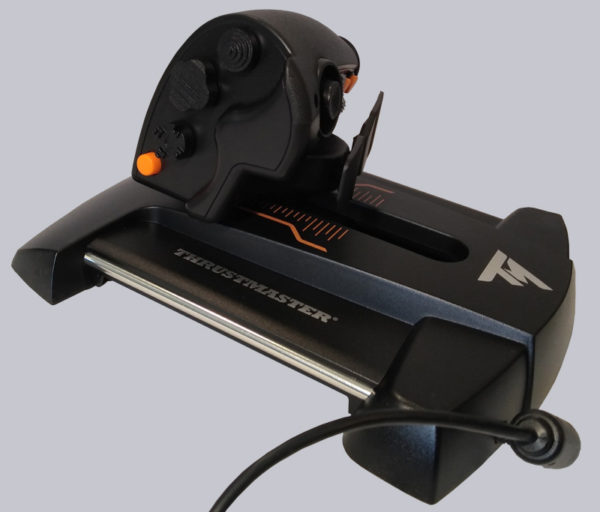 On the side of the pushcart there is an 8-way CoolHat and underneath two 4-way rocker switches, which basically use the same switching technology. The 4-way switches are completely differently shaped so that operation is easy without looking. In addition, there is another normal button at the bottom.

All these elements are operated with the thumb, which in this case is not easy even for the normal large hand – the front wing rudder and the lowest side gear knob can only be reached with a few stretches of the hand at the same time.

The base of the TWCS is equipped with 4 rubber feet, very flat and heavy enough not to slip easily. But also here there are two screw threads in the base plate to fix the throttle on a rack. At the front of the base there is an RJ11 socket to which the optional pedal set TFRP can be connected.

What is S.M.A.R.T.?
The acronym stands for Sliding Motion Advanced Rail Tracks and is the name of the slide rail system developed by Thrustmaster and used in the TWCS and TFRP. According to Thrustmaster, it is characterised by a very smooth and smooth movement.

The Thrustmaster Flight Rudder Pedals are not simple pedals, but offer a third axis which is controlled by moving the feet to each other. Thrustmaster also uses its own S.M.A.R.T. slide rail system for this purpose. 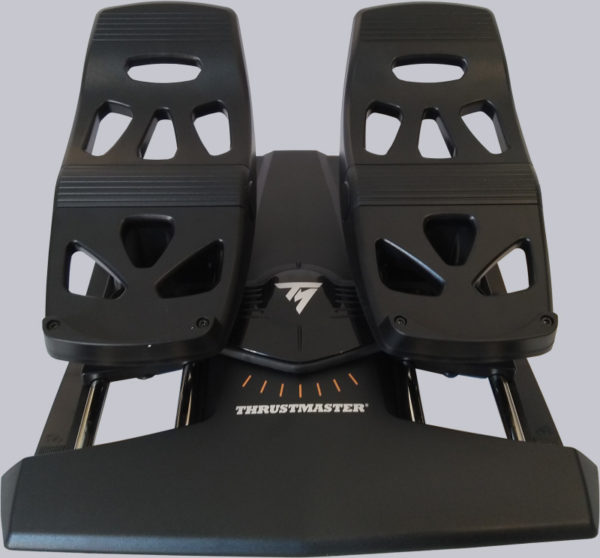 The foot pedals are equipped with heel supports, which can also be removed with the enclosed Allen key. The stroke of the pedals is about 20° or 4cm at the tip, the suspension is also relatively tight here and quickly returns to zero.

The Thrustmaster glide rail system can also be used on the pedals as soft as butter, but the suspension is also quite tight and only jumps back to the neutral position reliably.

The TFRP can either be connected to the TWCS with an RJ11 plug and thus extends the TWCS by three axes. It can also be connected directly to the USB port via an adapter to USB.

The base plate is equipped with 5 rubber feet and with almost 2kg relatively heavy, a slipping is unlikely on most floors.
Threaded screws for additional fastening are missing. 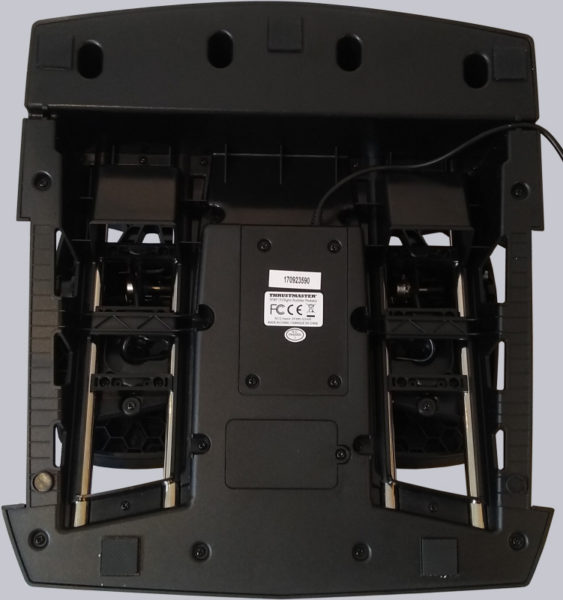