The typical form is due to the ease of handling on the desktop and is used by many manufacturers. 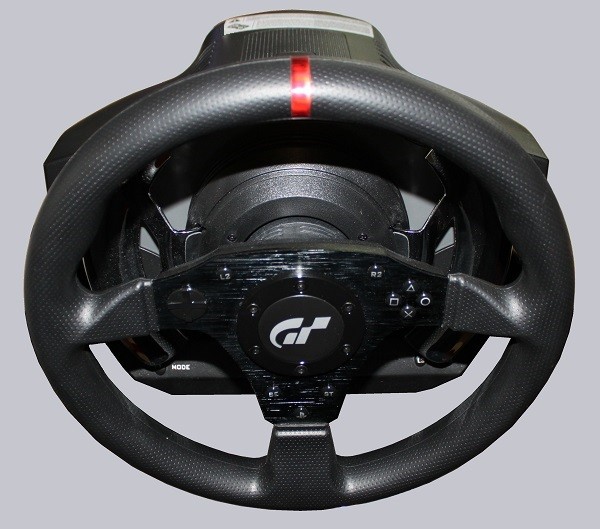 An unusual construction is used for fastening with a rotating rod to fit a screw. 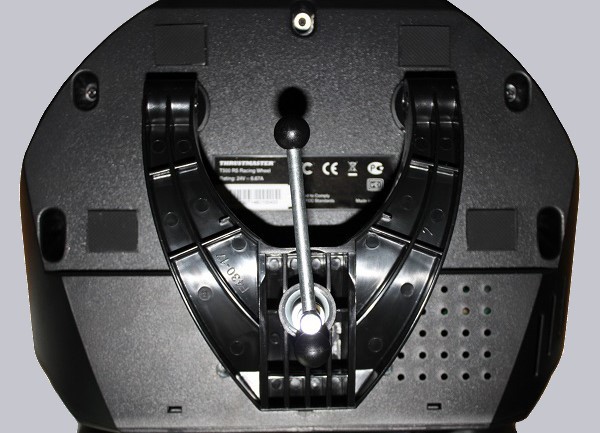 The two movable brackets then secure the steering wheel on the table. Also, more thread on the bottom are to mount the wheel on e.g. a Playseat (see gamescom report). 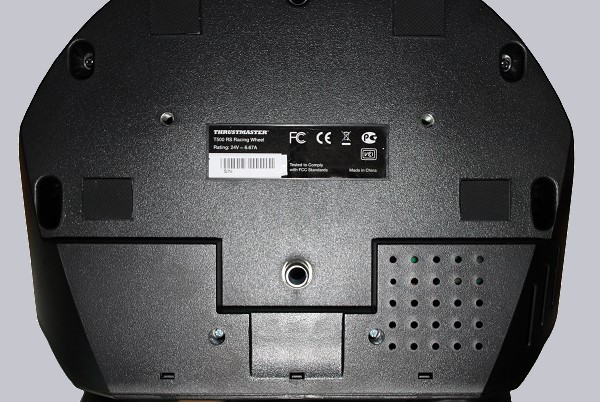 After the installation of the steering wheel, the following indicating the important switches. 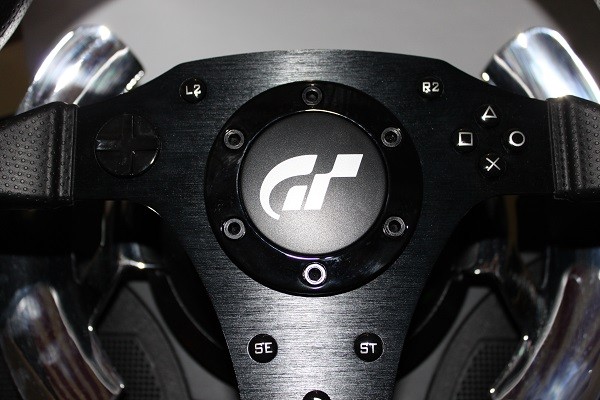 The console controls, as well as the two large pedals, which however are mounted to the machine and do not turn with the steering wheel are good to see. Two more buttons are located on the right side of the steering wheel. 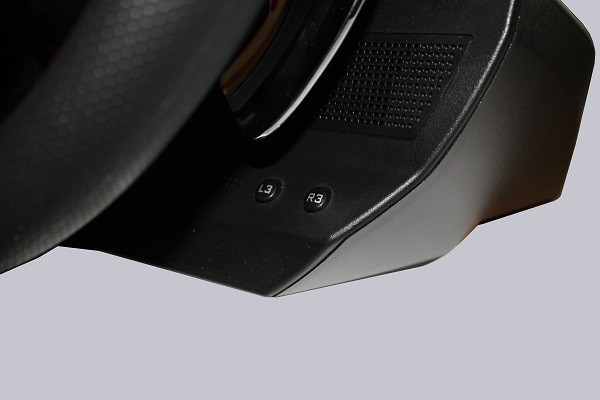 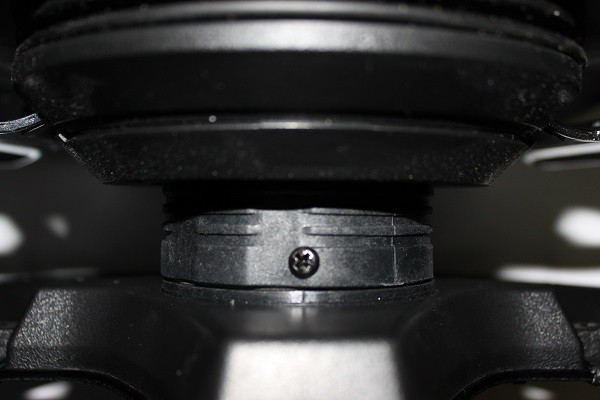 Unfortunately this is also a weak point of the design. All movements are done by this screw. Now this screw releases itself soon or later and the steering wheel begins to loosen.

Currently three viable solutions exist:
-To the one using a liquid Threadlocking is conceivable, which is applied on the screw but could complicate the replacement of the steering wheel a bit.
-The second option would be cutting the threads of the hole deeper, and insert a long screw. This also counteracts the effect of easing.
-Unfortunately, the last solution requires some more tinkering. One provides the basic unit, as well as the steering wheel with a quick release, then secure the steering wheel. But it is not easy to mount due to the data connection.

Let us look at the back of the base unit. 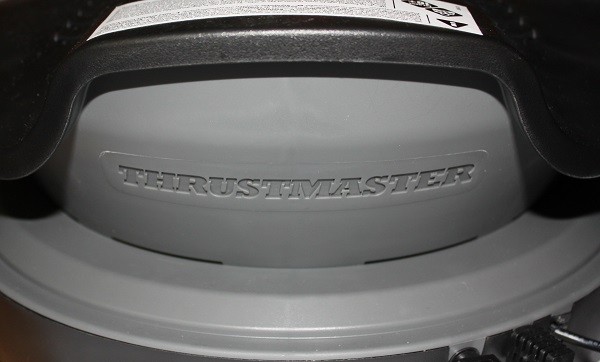 Here are the different interfaces for communicating of the T500 RS with the PC or the pedal unit.

There is the fixed USB cable, as well as an interface to the attachment of the pedal connector and a slot for the power connection. The pedal connector is a RJ11 Jack. The power plug is attached using a mini DIN socket with a locking mechanism. 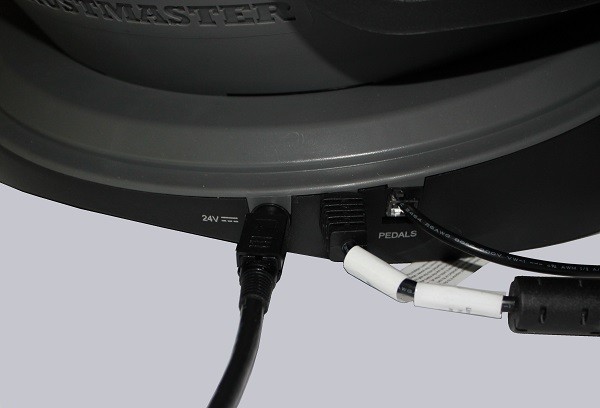 However, one negative point is the supplied AC adapter.

Not only that a permanent blue LED is lighting very bright, even the connection cable to the steering wheel is so short (approx. 130 cm), that it is likely not even enough at most desks to the floor. But who like to a put such a big bulky power supply on the desk ? 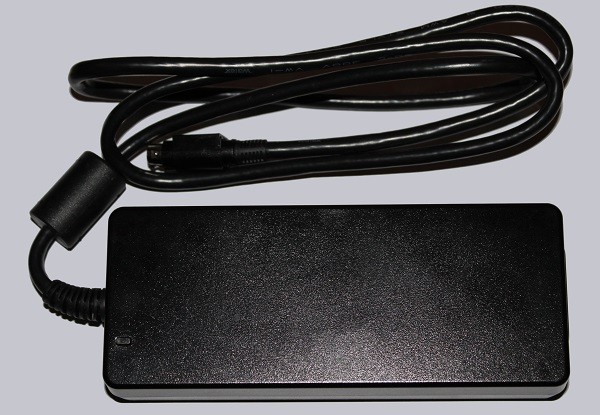 We now proceed to the pedals unit which is noticed in the removal from the board due to its heavy weight. This amounts approx. 3 kg.

Obviously, a special feature is that the pedal unit is designed to be operated in two locations:
One is called F1 position, when the pedals sticking out from the “base plate”. 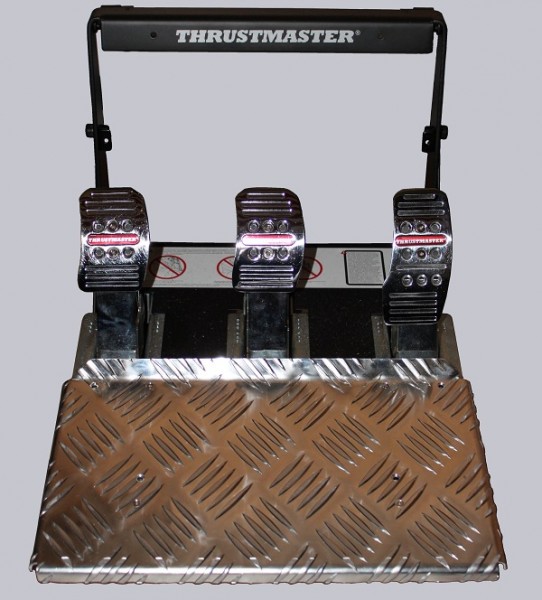 The other position is called the GT/rally position, because the pedals will come from the “rear wall”. The conversion requires only loosening the hexagon socket screws and a mount of the drop plate in the opposite position. 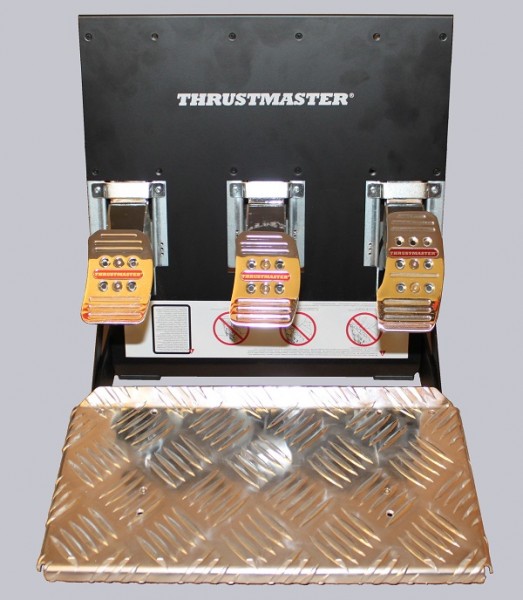 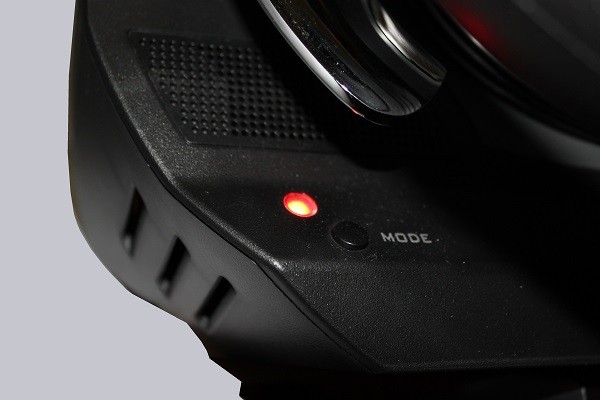 … replaces the gas pedal with the clutch and a swap of the pedals makes the exchange perfect. 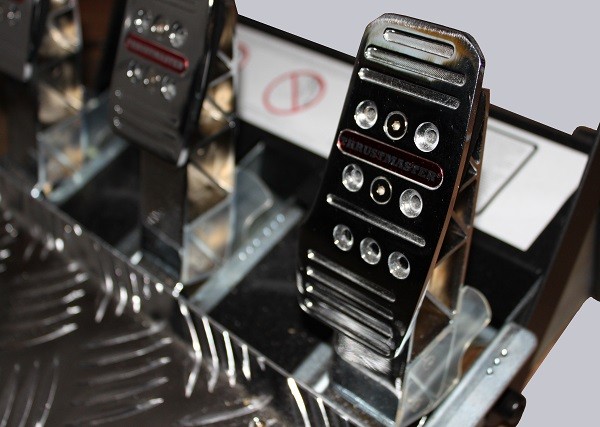 The clutch and gas pedal both have a slight resistance and can be pushed easily. The brake pedal, however, has a much higher resistance, just like in the car, and so much dose can be used. Through an enclosed “mod” the resistance of the brake pedal can be significantly better. The installation instructions located in the manual. Also, there are already more, also very inexpensive mods, to simulate a realistic pedal feel. However, the factory provided ones should be sufficient for most gamers.

Let us now continue with the force feedback of the T500RS. We giggle a bit when we saw the sticker with the warning information during unboxing, but the grin disappeared abruptly with the first test of the 100% FF force-feedback setting. Although it is “just” a 60 watt motor, but who has tilted a little drill, know what forces can occur. The industry drive motor simulates bumps and train thanks to the double belt just as credible as also the vibrations by for example the truck engine. However, to avoid injury and to protect your hands, you should set the force feedback setting forces to 50-60%, which is sufficient. The steering wheel makes a clearly audible noise around the centring. There are also small steps to feel if you turn the steering wheel very slowly.

Somewhat hidden on the web page, we find also a note on the steering noise which we want to present you here as a short quote.

Quote start:
Note regarding sound and natural feel of the steering wheel
The sound the wheel makes is slightly different, depending on whether the wheel is turned to the right or left:
The difference in sound that you may hear is to tally normal, and it is normal that the sound may be slightly more noticeable when turning th e wheel counterclockwise (i.e. to the left). This sound is related to the type of DC motor incorporated into the wheel, which is significantly larger and more powerful than motors used by our competitors. The sound you may hear when turning the wheel counterclockwise (to the left) is due to the brushes which help conduct electrical current to the rotor. Testing we have carried out indicates that this sound generally decreases over time (i.e. there is a short “breaking in” period”), and will absolutely not affect gameplay. It should be noted that a system employing dual synchronous belts, which are also much larger than belts used by our competitors, is used to transfer the motor’s torque to the wheel. The ratio between the level of sound produced and the ability to transfer powerful torque is much more favorable in this configuration than the use of gears or rack-and-pinion systems: this explains and justifies our choices, which are always driven by providing the very best gameplay for users.

I feel very slight “notches” or “steps” when using the wheel:
For the same reasons (= the use of a high-powered motor, and a system employing large dual belts), this feeling is also completely normal.
Quote end.
Source: http://ts.thrustmaster.com/download/accessories/Manuals/T500RS/T500RS_wheel_sound.pdf, date: 07.01.2015

These reasons are quite comprehensible and it should interfere the least, because everyone who is playing racing or transport simulations, is gaming with a certain noise level. However, more weight has the built-in fan to cool down the industrial engine at high load. 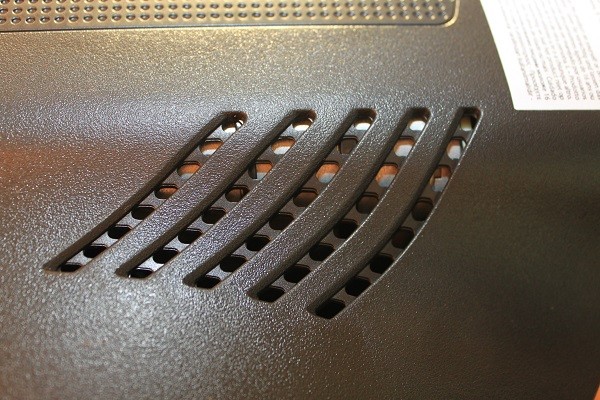 During our test, the fan launched after half an hour, but then steadily louder up to a level which was quite equal to our normal background noise.

Playing with headphones, relativized this problem. But it can be quite disturbing for speaker gamers. But as already mentioned, when you want powerful force feedback, you willingly must take the fan into account.

For the DIY enthusiasts among us, there are however various instructions and fan recommendations to get rid this problem.

Thrustmaster is going new ways in terms of service:
If you should get a defective T500RS or which has a defect within the legal warranty, should contact the customer service of Thrustmaster. They typically asks whether it would be possible to upload a picture of the said defect or a video of it. If this is the case, the Thrustmaster employees try to identify the problem and sent spare parts by mail including instructions how to exchange. This may save the technically talented customers 3-4 weeks of waiting for the steering wheel – namely the time for a repair.

Of course, the steering wheel also can be submitted for larger defects. Because this however must be shipped to France, that might not be an option for most. Anyway, usually during the warranty you should contact your local dealer, first.

Now we come to the last point of this part:

This is the software that can be downloaded on the manufacturers website in the current version.

It includes a firmware updater … 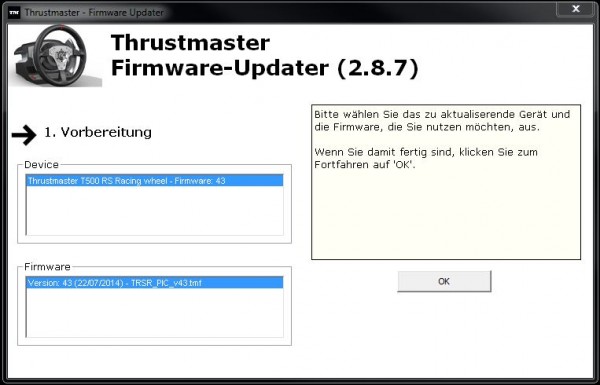 … and the actual software for information and setup. 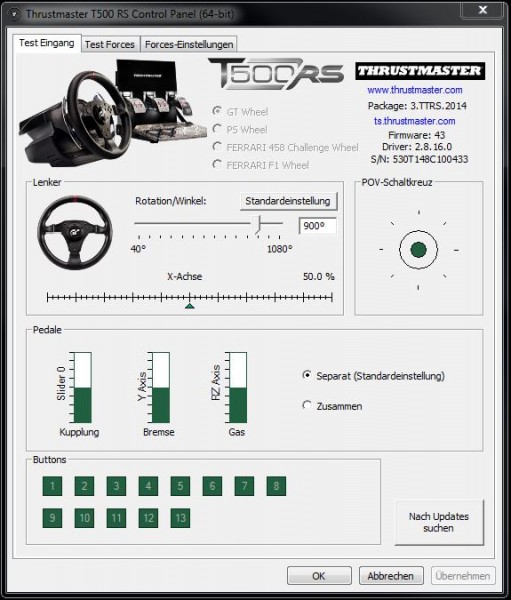 Here all functions can be observed and tested, on the other hand it offers also the possibility to obtain various force feedback samples to get a feeling for. 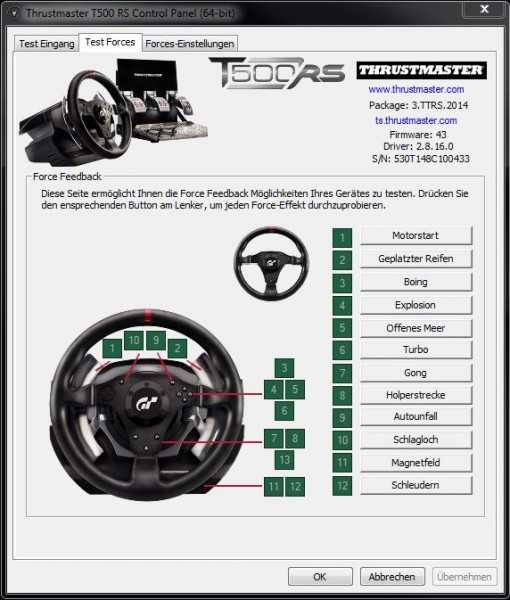 And last but not least, we have the opportunity to set up the force feedback parameters. 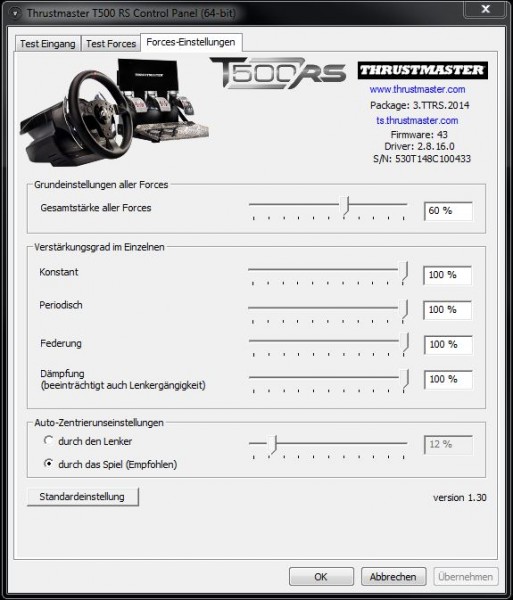 But now we come to the actual test of the Thrustmaster T500RS.