Regarding the overclocking we were a little disappointed with the third AMD Ryzen generation. The 3700X performs very well ex factory and clocks as specified by AMD, but the overclocking potential of our AMD Ryzen 7 3700X CPU was virtually non-existent. Despite the built-in water cooling we could only overclock the 3700X to 4.3GHz on all cores. For this we had to raise the VCore to 1.485V. Since even 4.325GHz with 1.5V were no longer feasible, we at least left it at 4.3GHz in this test. The power consumption increased accordingly, of course.

Also the temperatures went into the red range during the overclocking. Our water cooling was able to keep the overclocked 3700X at ~90°C under load. In the standard clock, on the other hand, we reached about 60°C. For comparison, our 1600X reached just under 54°C with the standard clock and overclocked 68°C with the same cooling, although the TDP is specified at 95 watts instead of 65 watts as with the 3700X. So you can definitely say that the third generation Ryzen heats a bit more than the first generation and that despite partly lower TDP. A further observation is that as soon as the CPU is in the overclocked state, the cooler doesn’t follow the temperature when the load changes. This suggests small but strong hotspots, another drawback will be that pretty much all coolers are designed so that the warmest point of the CPU is in the middle of the heatspreader. Unfortunately this is not the case with the new Ryzen! It remains to be seen whether the industry will supply the appropriate coolers.

Now let’s get to another exciting part, how does the 3700X perform?

Let’s start the benchmark parcours with all 8 cores. First we test the AMD Ryzen 3000 CPU with all cores and then again with overclocking.

So let’s finally start with the benchmarks, Cinebench will start the test. As expected, overclocking doesn’t change the single-core performance. But in the multicore test we were able to break the 5000 points sound barrier. 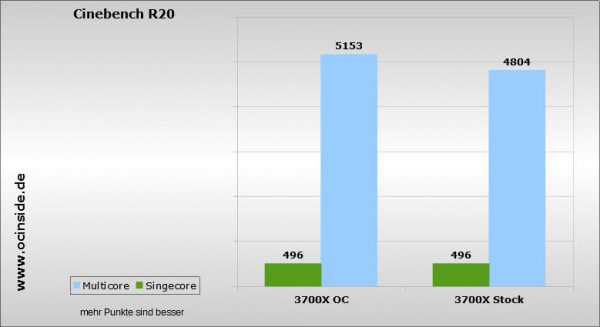 A similar result can also be seen with CPU-Z … 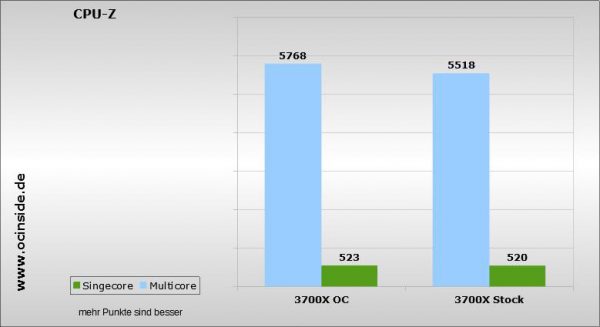 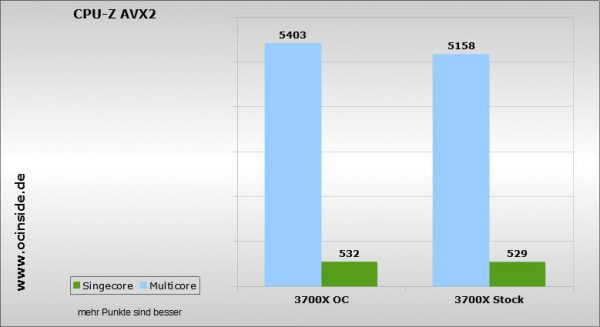 In the Firestrike there were also only marginally more points in the CPU part. 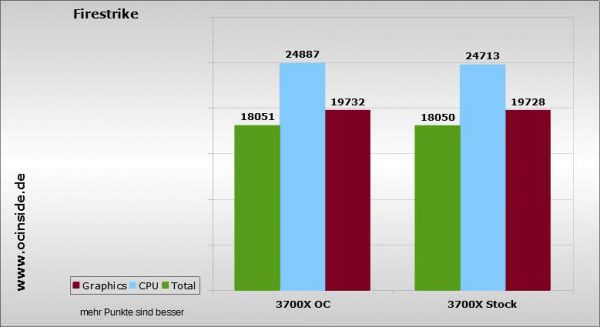 Also with Timespy the overclocking is not really noticeable. 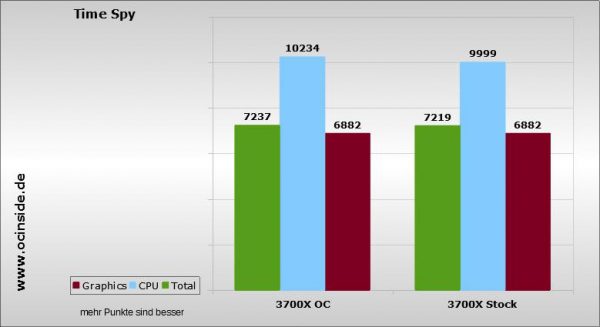 We can also observe a marginal increase in performance in the PCMark. Since superposition is still limited to graphics cards, we also get our 4000 points here again. 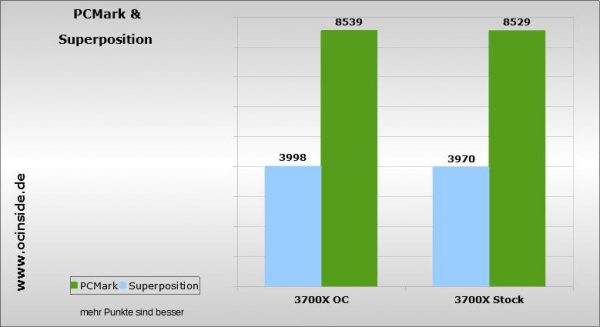 During the benchmarks we used the AMD Ryzen Master Tool to observe the behavior of the cores and could see how the processor clocks. In most cases we could see an allcoreboost of 4-4.2 GHz without overclocking, depending on what was calculated. On a single core, the specified 4.4GHz was often achieved, but usually more permanent 4.35GHz. We suspect that this is due to the heat generation. It was also very nice to observe that the cores switched off immediately without load and were then reactivated with different clock rates depending on the load.

AMD Ryzen gen1 vs gen3 compared with only 6 cores

Now it is time to evaluate the benchmarks with a 1 to 1 comparison to the 1600X. As described on the previous page, the 3700X can now hold its own against the 1600X. We have deactivated 2 cores for this purpose, in addition both CPUs were operated with DDR4-3200 to give the 3700X no advantage. In addition, we made a benchmark in which both CPUs were fixed to 4GHz.

Let’s start with Cinebench again, here the 3700X does very well as expected. As you can see very well, the 3700X is fixed at 4GHz and slower than with standard clock. 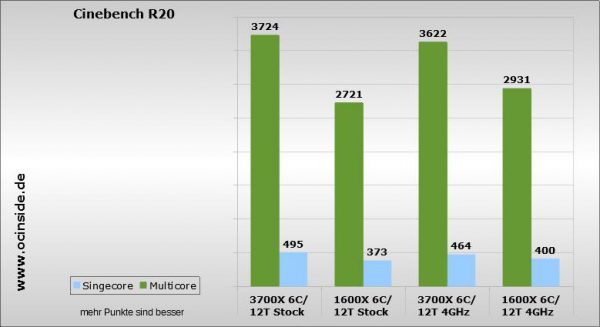 The same situation can also be seen with CPU-Z. 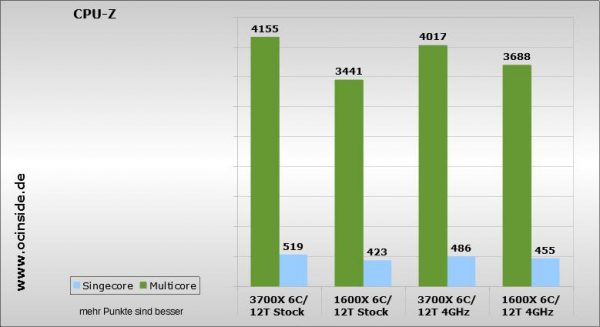 The biggest leap at IPC seems to be the AMD in AVX2 processing, because here the 1600X is beaten for worlds! Very exciting is the fact that the CPU achieves more points in the AVX2 benchmark in single-core mode than without AVX2. 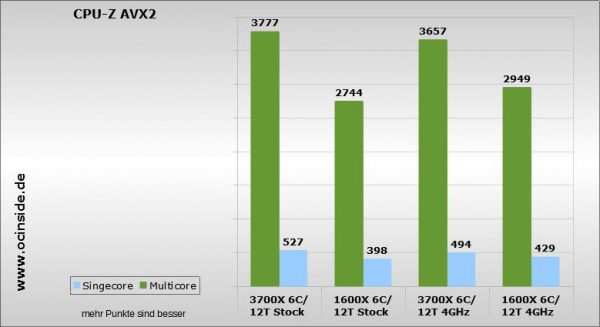 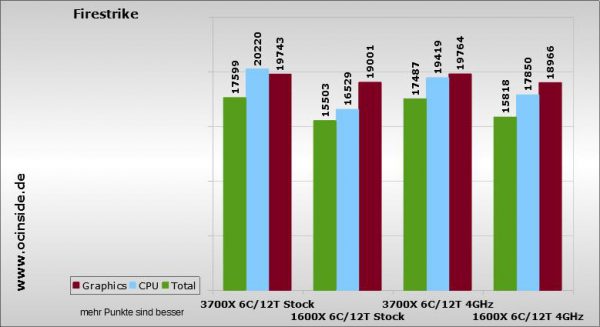 … and Time Spy we clearly see the increased IPC. 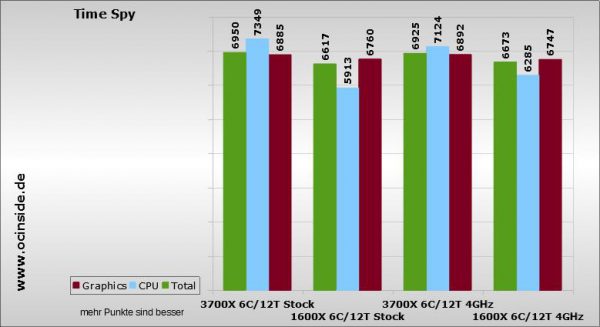 Finally we look at PCMark and Superposition. Since Superposition is graphic-climated in the 1080 Extreme setting, no increase is measurable. It looks different with PCMark, because even there the 3700X performs clearly better. 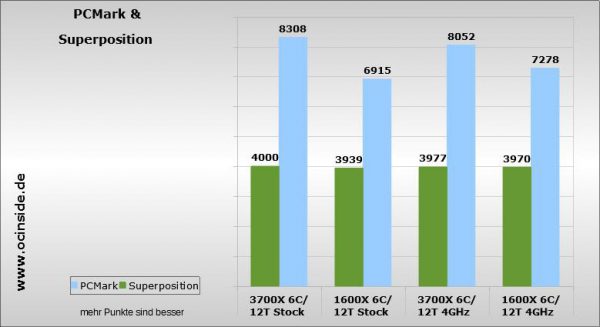 Let us now come to the final conclusion.