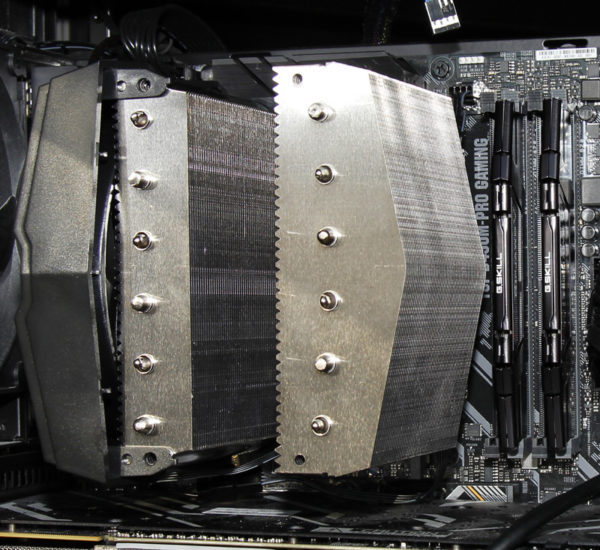 We test the Arctic Freezer 50 CPU cooler on our test system with AMD Ryzen 5 2600 CPU in factory and overclocked state. The test system consists of the following components …

To keep the influence of the case as low as possible, no side panel was mounted from the case during the tests.

The CPU was loaded with the program Prime95 where we chose the “Small FFT” test for maximum heat development and the temperatures were determined with the Hardware Monitor Tool HWiNFO.

The system was always loaded until no temperature increase could be detected for 5 minutes. The AMD boxed cooler and a good mid-range tower cooler, the Freezer 34 eSports, which is also available in a particularly chic white version, competed as opponents.

The readings for the non-overclocked CPU are as follows. Results with the value “>85 °C” mean that the test was stopped early because the cooling was not sufficient. 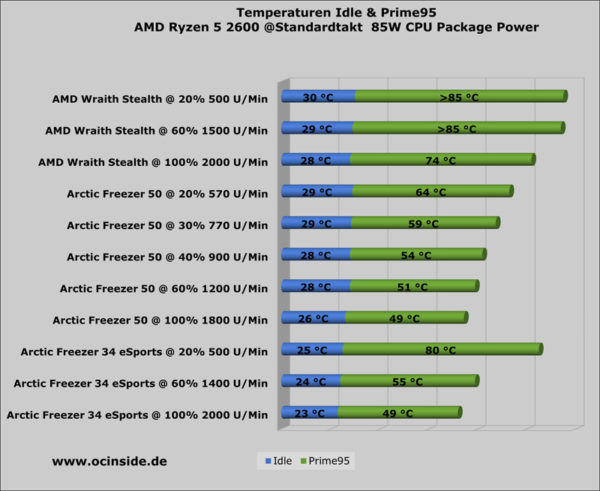 The AMD boxed cooler has to be run at maximum fan speed even at standard clock to cool the CPU sufficiently. This is completely different with the Freezer 50. As soon as its fans start moving, its cooling performance is already more than sufficient for the Ryzen 2600 processor. If you don’t tweak the clock speed, the Arctic dual-tower cooler is best suited for building an extremely quiet PC system. Only the slightly higher idle temperatures compared to the Freezer 34 eSports are a bit surprising. Since every CPU and cooler is subject to certain manufacturing tolerances, the Freezer 34 may have particularly good contact with our CPU and the Freezer 50 may not sit quite as perfectly on the Ryzen processor.

The minimum speed specified by Arctic could not be reached on our test motherboard. The lowest speed we were able to set was 400 rpm, instead of the stated 200 rpm. Fortunately, the Freezer 50’s fans remain quiet for a very long time when the speed increases, though. Only from 1400 rpm did the fans become clearly audible, although they are not really very loud even at maximum speed of 1800 rpm. This is at least true in comparison with other fans. We couldn’t detect any unpleasant background noise over the entire speed range, either.

Next, we increase the clock speed and core voltage of the Ryzen 2600 CPU. This increases the power consumption from 85W to now 133W. The AMD Wraith Stealth cooler could no longer provide sufficient cooling, which is why it is missing in the following comparison. 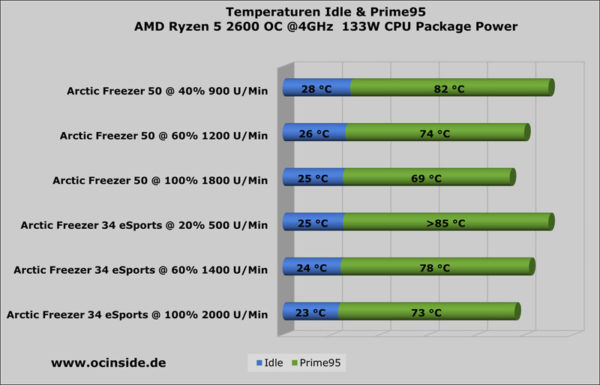 Finally, we removed a RAM module from the test setup and remounted the missing frame. The temperatures determined in the process were almost identical to before without the air guide frame. At very low speeds, the values were about 0.5 to 1°C worse with the frame and about 1°C better at full speed. We could not determine a striking difference with our test system, but with a CPU that generates even more heat, the difference could also be bigger. The positive effect could increase a bit especially at higher speeds.