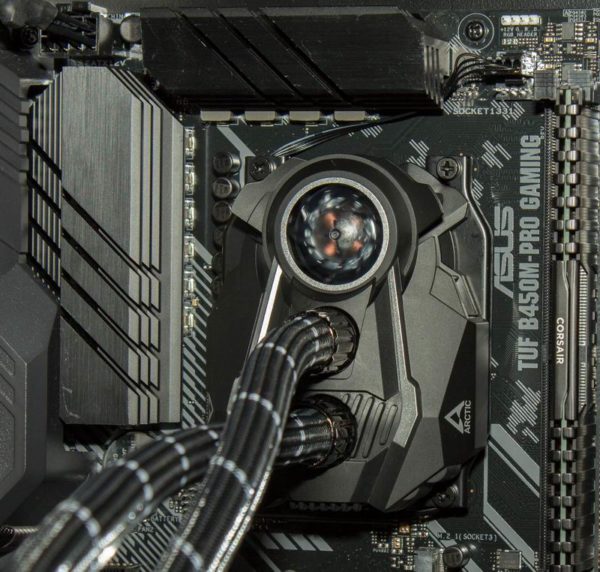 In order to keep the influence of the case on the test results as small as possible, no side wall of the case was mounted during the tests. The CPU was loaded with the Prime95 program where we chose the “Small FFT” test for maximum heat development. The temperatures were determined with the program HWiNFO. Here you can find the Tools for download.

In the first measurement series with not overclocked CPU we determined the following temperatures. Results with the value “>85 °C” mean that the test was aborted early because the cooling was no longer sufficient. 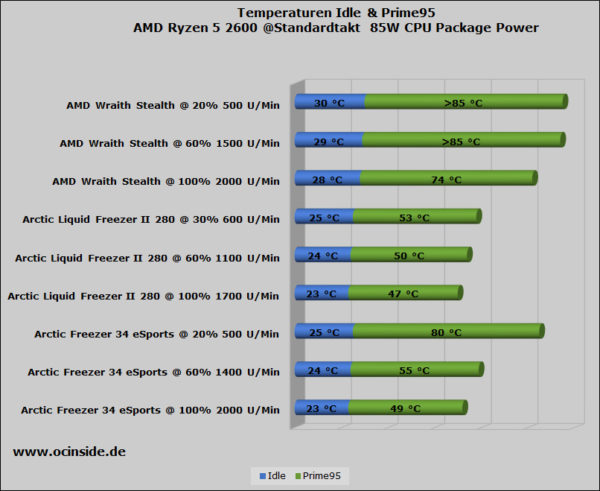 The AMD cooler must be operated at maximum fan speed even at standard clock speeds in order to cool the CPU sufficiently, and the Arctic Tower cooler specified up to 200W TDP delivers sufficient cooling power at medium speeds. The Arctic Liquid Freezer II 280 AIO water cooler has no problem keeping the 6-core processor at a low 53°C even with 600 rpm and almost noiseless operation!

In the absolute endurance test with full overclocking and AVX stress test, it then shows mercilessly what the coolers are really capable of. 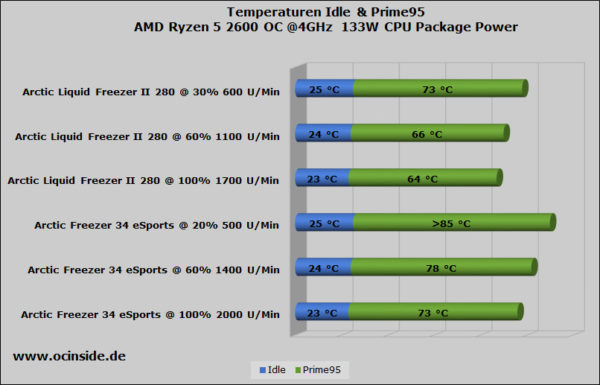 The new Arctic AIO water cooling with the large 280mm radiator clearly stands out and clearly wins the comparison to the tower cooler from their own company. Impressive is the fact that the Liquid Freezer II 280 water cooling can keep the fully overclocked AMD Ryzen 5 2600 CPU absolutely in check even at barely audible 600 rpm fan speed. With the AMD Boxed cooler you didn’t even have to think about overclocking you, because it can only keep the CPU in an acceptable temperature range with a standard clock.

Finally, we wanted to know how the pump speed affects the performance of the water cooling. We found out that at less than 45% speed there was some noise from the pump, which is why we only reduced the pump to 50% for the following test. Previously the pump was hardly audible and at 50% it ran almost noiseless, but this was also due to the fact that the 40mm fan at the pump also ran at reduced speed.

Here are now the comparison values for the overclocked CPU with 100% and with 50% pump speed. 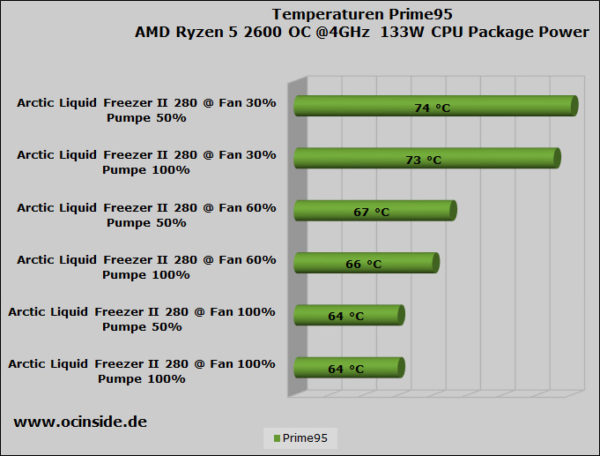 … and here in tabular form.

Now let’s come back to the VRM fan. As mentioned in the layout, design and features page, the Arctic Liquid Freezer II 280 AIO has an additional 40mm fan, which cools the voltage converters (VRM) around the CPU of the motherboard during overclocking and thus protects them from overheating. However, the airflow generated by the 40mm fan was hardly noticeable even at maximum speed. If you have a 120mm fan mounted at the back of the PC case and maybe one or more fans mounted at the top of the case, you won’t notice any difference with this additional minifan, because the case fans carry a multiple of air volume through the case. Nevertheless, the basic idea of Arctic is good, because those who don’t have too good case ventilation often neglect the cooling of the important VRMs with water cooling.