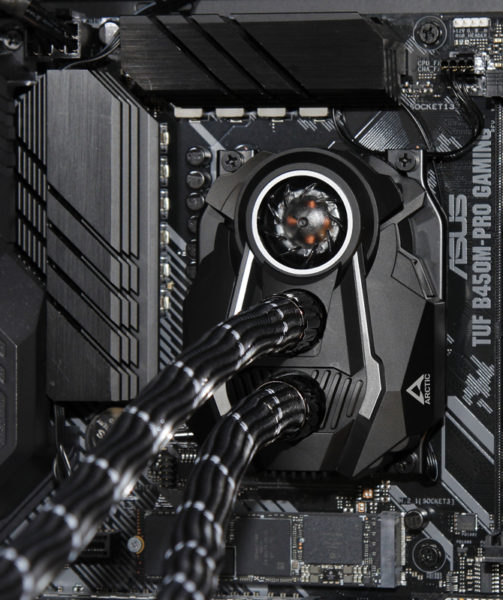 We test the Liquid Freezer II 360 AIO water cooler on our well-known test system with AMD Ryzen 5 2600 CPU in factory and overclocked condition.

To keep the influence of the housing as low as possible, no side wall of the housing was mounted during the tests. The CPU was stressed with the software Prime95, where we chose the Small FFT test for maximum heat development, and the temperatures were determined with the program HWiNFO. Here you can find the tools for download.

The system was always under load until there was no temperature increase for 5 minutes. The opponents were the AMD Boxed cooler and a good mid-range tower air cooler, the Arctic Freezer 34 eSports. The pump of the Liquid Freezer II 360 always ran at 100%, because it doesn’t make any audible noise even at 100% speed. Thus, only the fan speed was varied.

The measured values for the not overclocked CPU are as follows. Results with the value “>85 °C” mean that the test was aborted early because the cooling was not sufficient. 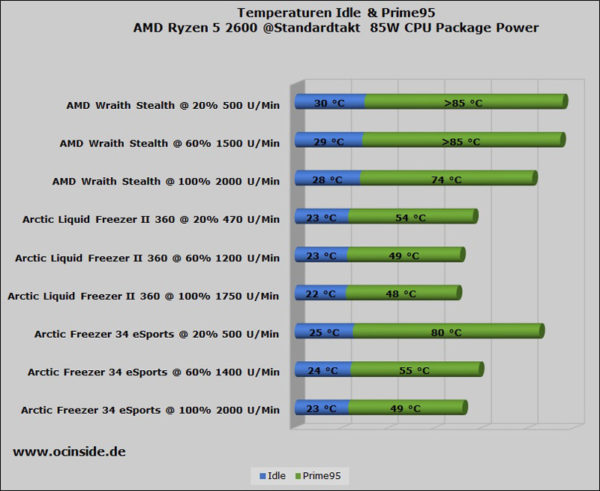 The AMD Boxed cooler must be operated at maximum fan speed even at standard clock speed to cool the CPU sufficiently and the Arctic Tower cooler delivers sufficient cooling power from medium speed. The Liquid Freezer II 360 probably doesn’t even notice that the CPU is running at all on a Ryzen 5 2600 on standard clock!

Even with a fan speed of less than 500 rpm, the CPU core temperature only reaches 54°C. The Liquid Freezer II 360 is literally whisper quiet with 26dBA at a distance of 30cm, because neither the pump nor the fan produce any noticeable noise during operation. At a still very pleasant 30dBA and a fan speed of about 1200 rpm, the Arctic water cooler increases its performance and cools the CPU down to only 49°C under full load. This should be the sweet spot of the 360mm AIO, as the volume increases significantly at higher rpm and the temperature only drops marginally. At full fan speed of 1750-1800 rpm, the CPU core temperature is 48°C, but at a clearly audible 42dBA. This is still considerably quieter than the noise level of many other water cooling systems on the market.

Let’s heat up the CPU and overclock the Ryzen 5 2600 to 4GHz, whereby the CPU produces 133 watts of power dissipation. This is about 56% higher than with a standard clock. Since the AMD Wraith Stealth cooler was already at its limit at the factory clock, only the Arctic Tower cooler and the Liquid Freezer II 360 are now competing against each other. Here are the results. 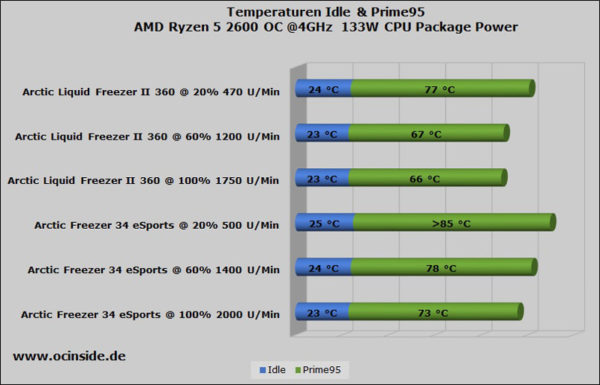 Even after overclocking, Arctic’s water cooling shows no weaknesses. The six-core Liquid Freezer II 360 keeps the six-core without problems at uncritical 77°C even with 20% fan control. This is to be noted under synthetic load, where all calculations take place in the CPU’s cache, which generates an enormous amount of heat. In gaming mode, the CPU probably gets a maximum of 60-65°C under these conditions. If the fan speed is increased to 1200 rpm again, the CPU temperature drops by another 10°C to a calming 67°C. At full speed the temperature is then 66°C.

We see the VRM fan as a nice bonus, which can have a positive effect on the mainboard’s voltage converters under very cramped conditions, like an HTPC in M-ITX format. 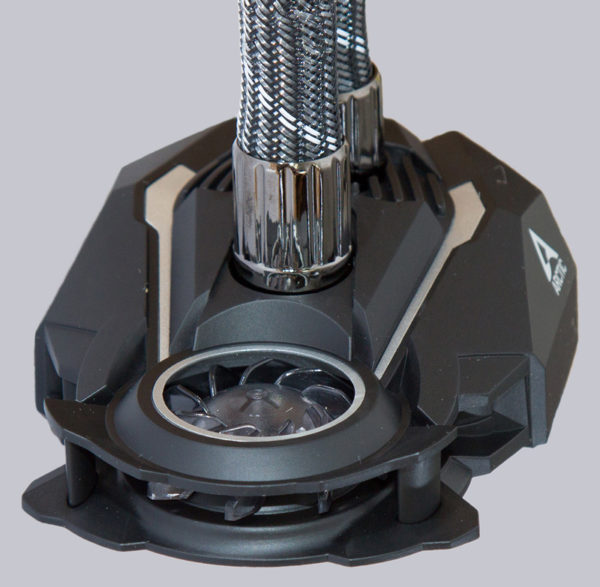 In a gaming PC in M-ATX or ATX format, where one or the other case fan is still installed, the benefit of the VRM fan will hardly be measurable, or more precisely, we already tested this with a 60mm VRM fan of an Asus ROG Ryujin 360. But here we think we’d rather have than need, because even at full speed the 40mm VRM fan of the Liquid Freezer II 360 AIO produces practically no audible noise.