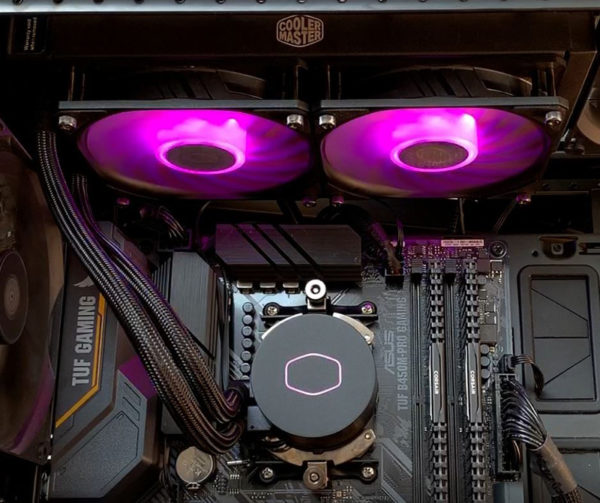 We test the ML240L V2 water cooling on our test system with AMD Ryzen 5 2600 CPU in factory and overclocked state. The test system consists of the following components …

In order to keep the influence of the housing as low as possible, no housing side wall was mounted during the tests.

The CPU was loaded with the Program Prime95, where we chose the Small FFT test for maximum heat development. The temperatures were determined with the program HWiNFO.

The system was always loaded until no temperature increase was detected for 5 minutes. Our opponents were the AMD Boxed Cooler and a good mid-range tower air cooler, the Arctic Freezer 34 eSports. The pump of the water cooling always ran on 100%, because Cooler Master only indicates 12V operation.

The measured values for the not overclocked CPU are as follows. Results with the value “>85 °C” mean that the test was aborted early because the cooling was no longer sufficient. 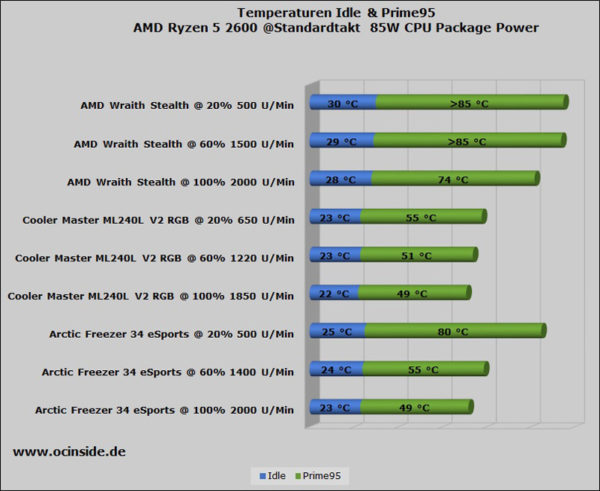 The AMD Boxed cooler must be operated at maximum fan speed even at standard clock speed to cool the CPU sufficiently. The Arctic Tower cooler delivers sufficient cooling power from medium speed. For the ML240 V2 RGB water cooling, the 6-core from AMD at standard clock speed does not pose a particular challenge. Even at minimum fan speed of 650 rpm the water cooler reaches the same temperature as the Arctic Tower air cooler at 1400 rpm. In this state the water cooler produces a noise level of whisper quiet 27-28dBA at a distance of only 30cm. From a closed case it is hardly audible. Full of optimism, we now look at the values of the overclocked CPU, where considerably more heat has to be dissipated by the cooler. With the AMD Boxed cooler, it was not possible to overclock all cores to 4GHz, which is why no values are listed for it in the following table. 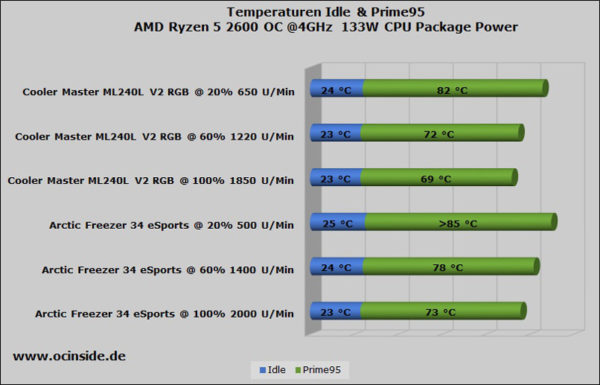 Now the Cooler Master ML240L V2 RGB is hard at the limit at minimum fan speed. We recommend to increase the fan speed to over 1000 rpm. At about 1200 rpm, the water cooling undercuts the Arctic air cooler by 1°C at full speed. Up to approx. 80% fan speed, the water cooling remains pleasantly quiet. Beyond that, the noise level rises significantly up to 45dBA at 30cm intervals. This is then also very clearly audible from a closed case. The temperature drops only insignificantly above 80% fan speed, which is why it’s not even necessary to turn the fans up fully. But even at the highest performance level, the Cooler Master ML240L V2 RGB is significantly quieter than the loudest water cooling systems we tested.

The pump also convinced during the tests with a very low noise level. Only a minimal humming can be heard from it at full voltage of 12V. Of course, it also runs at less than 12V, although this is not recommended by Cooler Master. At 7V, its power consumption is reduced from 0.28 A to 0.09 A. The already low noise level also dropped a bit from 27 to 25 dBA at 30cm intervals.

The implementation of RGB lighting has been very successful. Since an illuminated fan frame was omitted, the full flow cross-section for the fan blades is retained. The illumination of the milky white fan blades is nice and even and the luminosity leaves nothing to be desired. The discreetly illuminated Cooler Master logo on the flat top of the pump blends unobtrusively into the rest of the lighting. 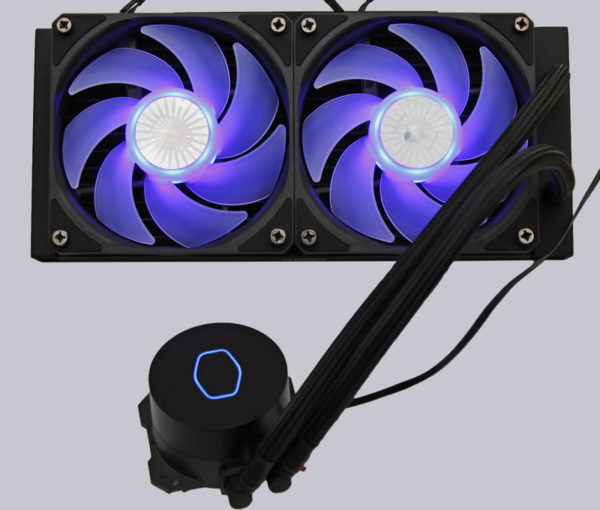 Which lighting effects the included RBG controller creates, we show in the following video on our OCinside YouTube channel, which by the way is very happy about every new subscriber 😉