AS SSD benchmark results
The AS SSD benchmark values offer a very good indication of the maximum possible read and write speed, the speed for smaller files and their respective access times. By the way, 4K means that small 4K blocks are read or written and this is distributed to 64 threads simultaneously in the 4K 64Thrd. Thus, the benchmark program simulates a typical program start, for example.

With the 1TB P5 Plus SSD, we already achieve values in the AS SSD benchmark that are clearly above the maximum PCIe 3.0 x4 bandwidth. Compared to the predecessor P5, the achieved score is a staggering 40% higher. We would also wish for such increases in new CPU generations :biglol: 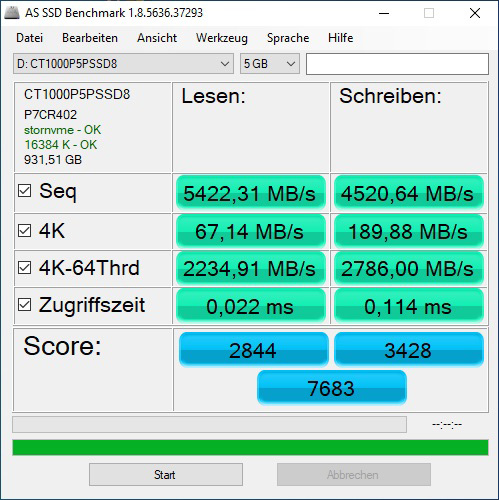 … and here are the corresponding IOPs values 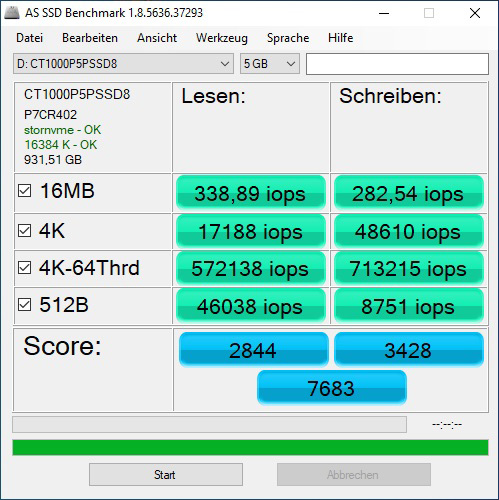 With a test file size of 1 GB, the SSD achieves the lowest measured value for access time. 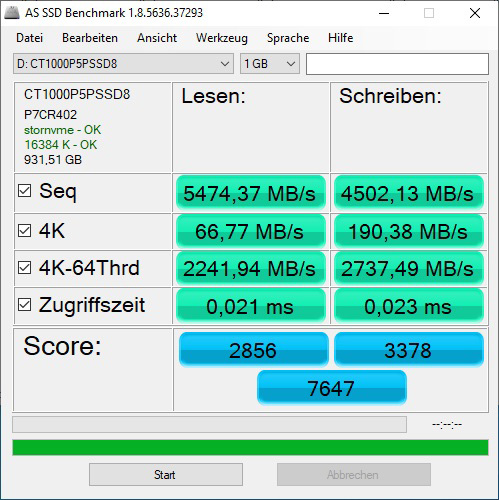 Top rates are also achieved in the AS SSD Copy benchmark. 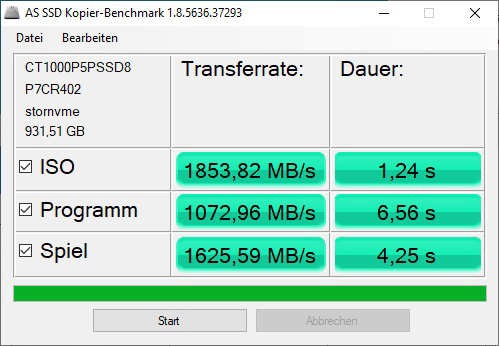 For comparison, we still tested the Crucial P5 Plus 1TB in the PCIe 3.0 x4 slot on the Intel system under Windows 10: 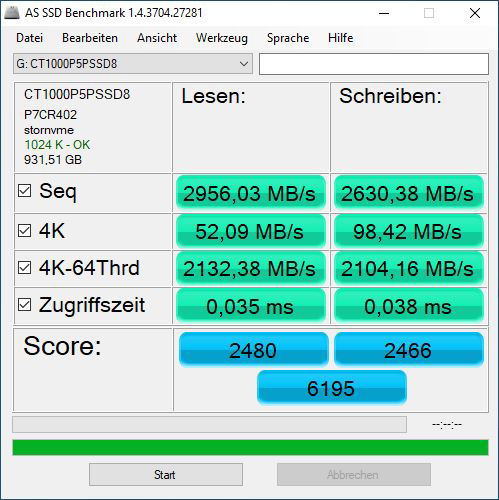 And we even spared no effort to test the Crucial P5 Plus 1TB in the PCIe 3.0 x4 slot on the Intel system under Windows 11. 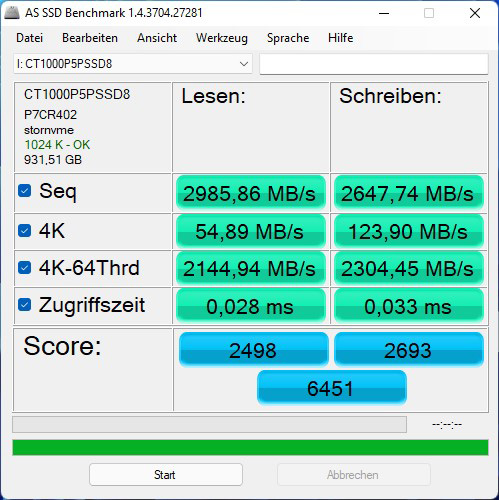 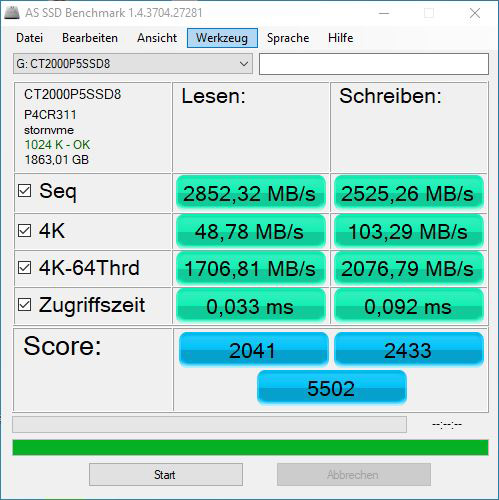 ATTO Disk benchmark results
The ATTO Disk Benchmark values give a very good overview of how the write and read speeds behave with different file sizes. However, the measured values are maximum values that should not be confused with the continuous transfer rates, since this benchmark can be higher even in SSDs with a slower overall performance.

Starting at 16kB transfer size, the P5 Plus NVMe SSD reaches write values in the gigabyte/s range and starting at 64kB, the maximum speed of 4.66GB/s is reached. Even with these tiny file sizes, significantly higher speeds are achieved than in the predecessor P5. When reading, the PCIe 3.0 x4 standard is surpassed from 256kB transfer size and from 4MB the maximum value of 6.38GB/s is reached.

Here is a screenshot of the ATTO disk benchmark values: 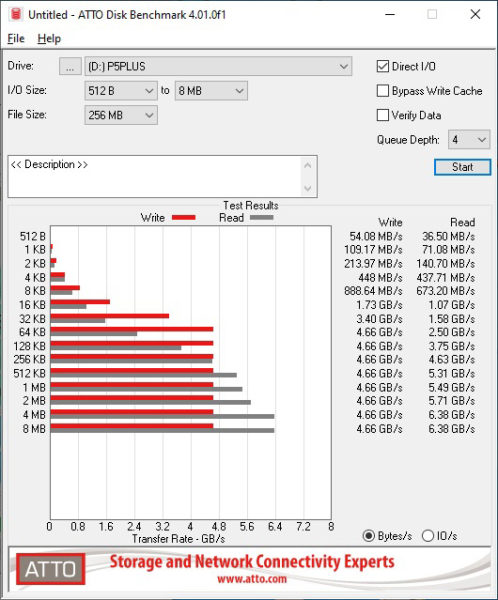 The P5 Plus 1TB NVMe SSD achieves excellent rates in all categories. The sequential transfer rates of 6848 MB/s read and 5010 MB/s write are even slightly above the manufacturer’s specification of 6600 MB/s and 5000 MB/s.

Here is a screenshot of the CrystalDiskMark values (M.2 NVMe): 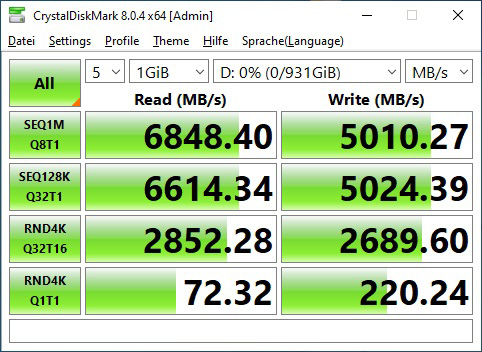 HD Tach results
The HD Tach benchmark values show the course of the performance very well, but it is clearly different for an SSD than for a conventional HDD. Due to the new logical management of the SSD controllers when accessing the NAND cells, the values can fluctuate with the HD Tach version 3.0.4.0, which is designed for hard drives, as with SSDs with a similar structure. 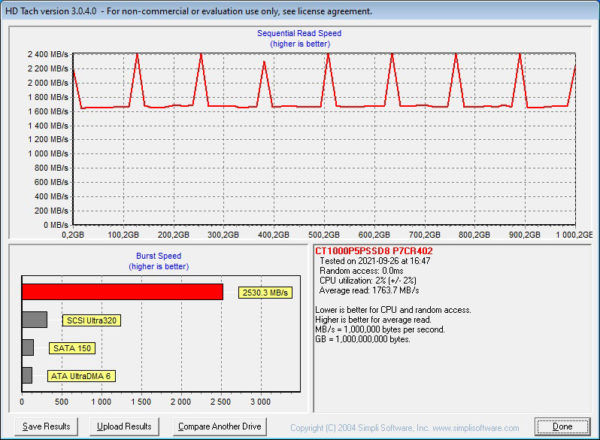 … and the P5 Plus does not show any weaknesses in the long benchmark, either. 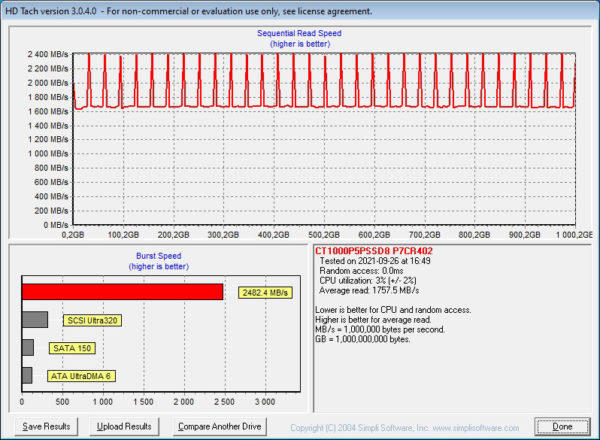 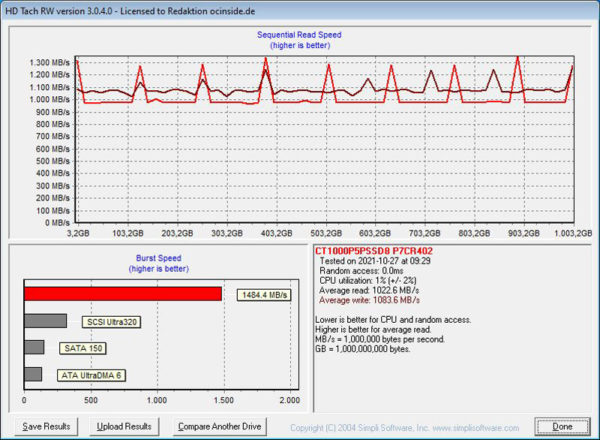 The average access time of the Crucial P5 Plus 1TB M.2 NVMe SSD was extremely low at 6us in the SiSoftware Sandra read test and the drive index of 5.36 GB/s is also another first-class result.

The P5 Plus also achieves dream values with 7us access time and a drive index of 4GB/s when writing.

Even with longer and repeated benchmark runs, the determined readings were constant. Additionally, we also stressed the P5 Plus with common file copy operations. But even the storage of 153GB test files delivered by a PCIe 3.0 x4 NVMe SSD did not result in any throttling of the speed. 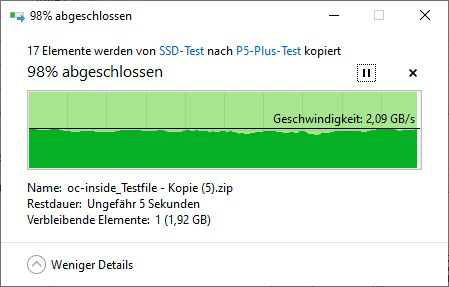 Nevertheless, we recommend using a passive heat sink, as it is included in many motherboards. The maximum temperature output from the internal temperature sensor could be reduced in our case from over 70°C to just over 50°C! The temperature increase is then also much slower than without a heat sink. With a heat sink, no speed losses due to thermal throttling are to be expected in normal use.