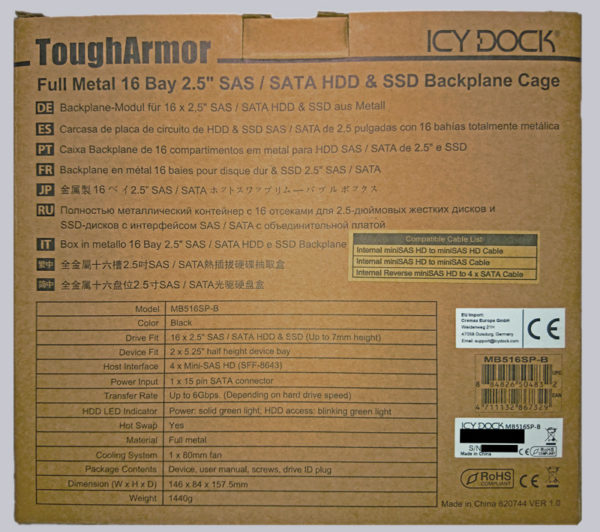 The specifications on the box are interestingly different from those on the website. The box specifies only 1x S-ATA as the power connector, but the 4x S-ATA specified on the website is correct. The box certifies a maximum data rate of 6 Gbit/s, while the website states 12 Gbit/s. Mini-SAS HD has a capacity of 4x 12 Gbit/s and since the MB516SP-B has four Mini-SAS HD connections with four lanes each, each drive should be connected with 12 Gbit/s as stated on the website, if it is a SAS drive. Thus, the MB516SP-B supports a total data rate of 4x (4x 12 Gbit/s) = 192 Gbit/s when fully equipped with SAS SSDs. Thus, the limiting factor is rather the HBA or its PCI-E slot, but more about that later.

Consequently, you can connect the removable frame in different ways, even directly with SATA connections. Of course, a reduction to a maximum of 6 Gbit/s per drive has to be accepted.

Another possibility to connect the MB516SP-B, which also works, was not listed here. But more about that later.