The Icy Dock ToughArmoer MB516SP-B fits into two 5.25″ drive bays and is therefore very well suited for use in tower PCs but especially for use in 3 and 4U server enclosures. However, the dust protection caps should be removed from the miniSAS-HD connectors before installation, as they are very tight and difficult to remove without the help of pointed pliers. 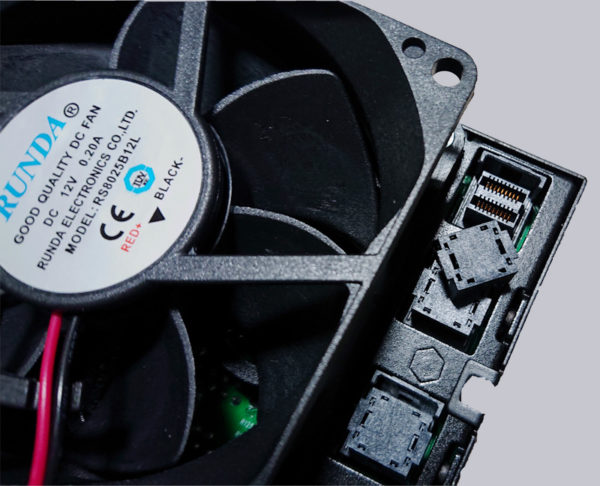 The powerConnection are placed sufficiently far apart so that either serial or parallel connected SATA power cables can be used. 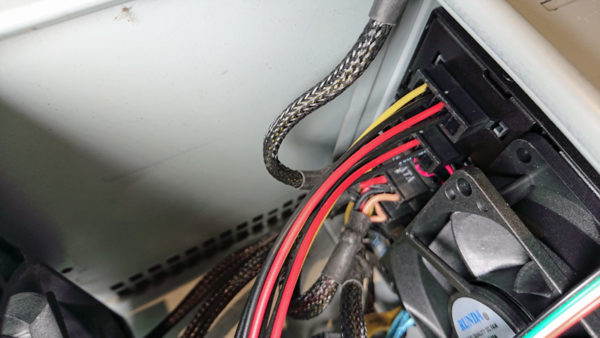 The SAS cables reduce the cable clutter in the case to a maximum of four data cables, which ensures an unhindered air flow in the case. Thus, these removable frames can also be installed in server enclosures in tightly packed racks without hesitation. 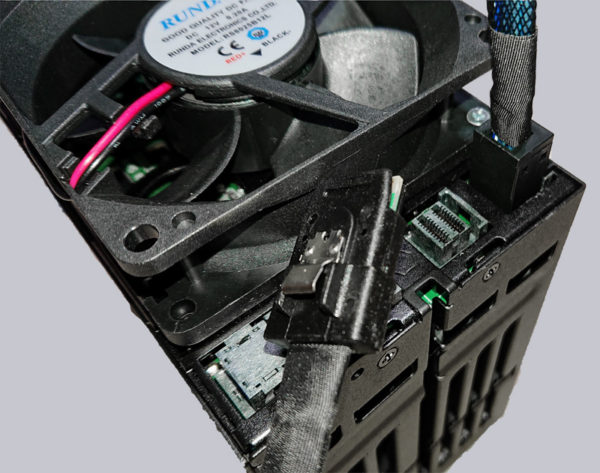 However, it should be noted that the included screws (M3x2.5L) might be too short for cases with thicker material. However, Icy Dock has already remedied this on their website, so you can either use M3x4L screws or contact IcyDock directly and get replacement screws. You can tell by the good service that you have purchased an enterprise product!

The maximum 7 mm high drives are attached to the EZ Slide Nano Trays carrier plates. Unfortunately, the drives can’t be mounted without tools like in the ExpressCage series, but have to be fixed with four screws, which means 64 screws for a full configuration of 16 drives. If small metal bolts had been used, the number could have been reduced to at least 32 screws. 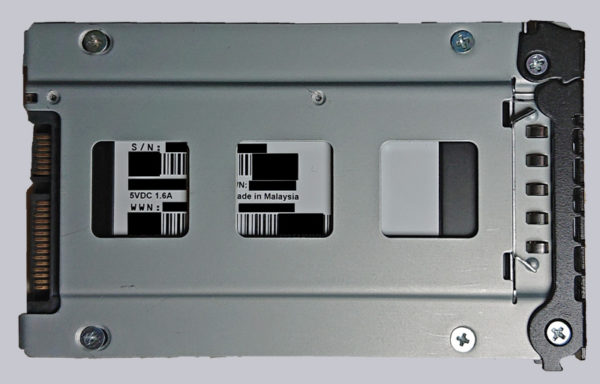 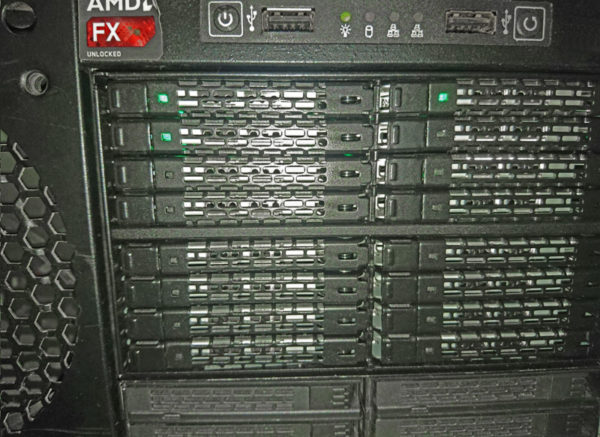 The miniSAS-HD Connection can also be connected via Mini SAS SFF-8643 to SAS SFF-8087 in addition to the connection options recommended by Icy Dock. This opens the possibility to connect the MB516SP-B even with cheap secondhand HBA controllers like an HP H240 or a Dell Perc H310/LSI SAS2008 (Attention, only PCI-E 2.0! Thus maximum 4 Gbyte/s possible). If you use SATA SSDs, you should at least use two PCI-E 3.0 HBAs like an HP H240 to be able to use the full SAS3 bandwidth. However, if you only want to use HDDs, you can also install LSI SAS2008 or use an SAS expander.

The bottleneck is therefore more likely to be found in the controller, the drives or the capacity of the cables than in the removable frame. If you use an HP H240, the maximum data rate to the drives is 8×12 Gbit/s SAS3, but since this corresponds to a data rate of about 12 GB/s, the PCIe 3.0 8x slot is the limiting factor here as well. However, if only SATA SSDs are used, the required bandwidth is halved to 8×6 Gbit/s (=48 Gbit/s) and 6 GB/s respectively. Thus, one or two HBAs with a PCIe 3.0 8x slot are sufficient. 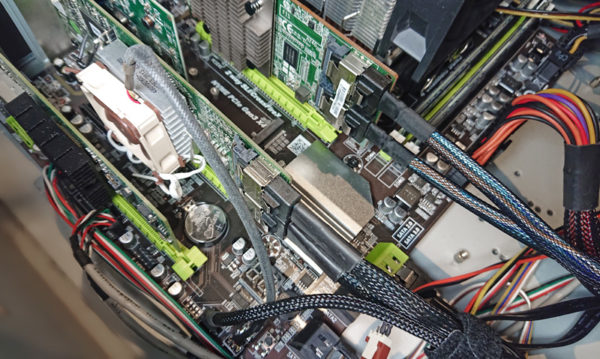 When using an HBA, the choice of SSDs should also be well considered, since most HBAs require DRAT (Deterministic Read After Trim) or RZAT (Read Zeros After Trim) for a smooth TRIM process. This can be found out under Linux with the following command line:
hdparm -I /dev/sdn | grep -i trim

After some tests and research, only the Samsung Evo 860, Samsung Evo 870, Samsung Pro 860, WD Red 500 and some Intenso SSDs support these commands in the consumer sector according to our knowledge. However, the latter are not recommended due to a lack of documentation about the components used. The popular Crucial MX500 does not support DRAT or RZAT.

Now we want to see if the ToughArmor removable frame can also convince in practical testing.