We installed the Icy Dock ToughArmor MB902SPR-B removable frame in a server and tested it.

It is checked whether the drives are recognized without problems and how high the data rate is. Furthermore, the RAID functionality was tested and the rebuild time was determined.

The following PC setup was used as the test system:

As mentioned at the beginning, the MB902SPR-B is a RAID-1 removable frame. It is therefore a hardware RAID controller and you do not have any direct access to the hard disks behind it, which means SMART cannot be read out. It can’t be determined to what extent external TRIM commands are passed through.

The large height of 15 mm and the now 8 year old JMS562 controller from JMicron, which has a maximum data rate of 400 MByte/s according to the data sheet, clearly points to the use of HDDs with a higher capacity. A good example here would be Toshiba’s MQ03ABB300, which has a whole 3 TB of storage space on 2.5″ and 15 mm height. Unfortunately, this hard disk was discontinued some time ago and there is currently no hard disk available with more than 2 TB and the CMR method for 2.5″. For any RAID array, the SMR method is strongly discouraged because the slow write speed and high latency can lead to a faulty rebuild.

A MQ03ABB300 was installed for testing the dimensions, but could not be used for the tests due to the lack of a second identical HDD. The Toshiba HDD fits perfectly into the EZ-Trays. 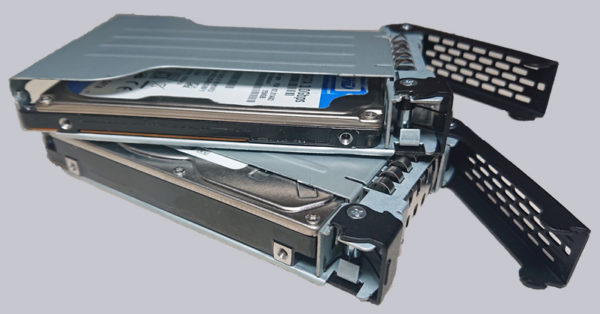 Interestingly, the JMS562 is an S-ATA Bridge chip and not a classic RAID controller. Thus, it does not seem to be a hardware RAID in the classic sense, but the data is apparently actually copied. This means that the HDDs can also be connected and read out directly in the PC. This means that you can still access your data in case of a defect of the Raid controller, which of course represents a certain degree of security.

According to Icy-Dock, the removable frame automatically detects a drive failure and visually indicates which drive it is. If you replace this drive, the rebuild process automatically starts with the same capacity of the new drive.

The test was first performed with two WD Blue 250 GB HDDs. These are directly recognized by the RAID controller without any problems. 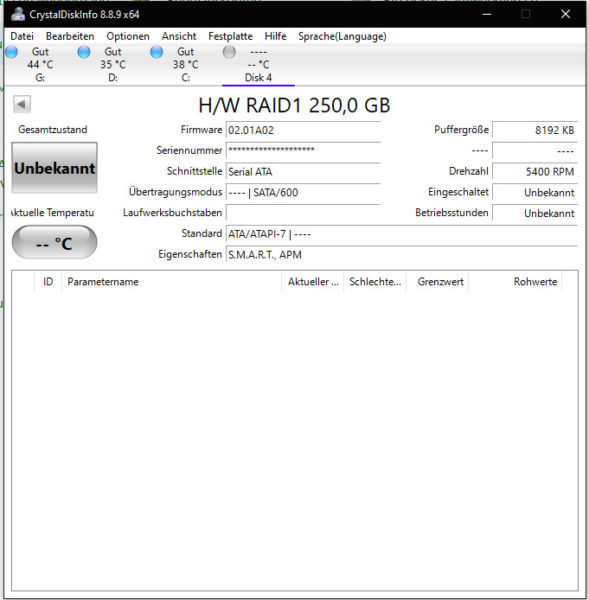 The data rate is a constant 64 MB/s, which also reflects the real values of the WD Blues. As already mentioned, this is an S-ATA Bridge chip with a maximum data rate of 400 MB/s, so this maximum data rate should also roughly correspond to what the MB902SPR-B supports. 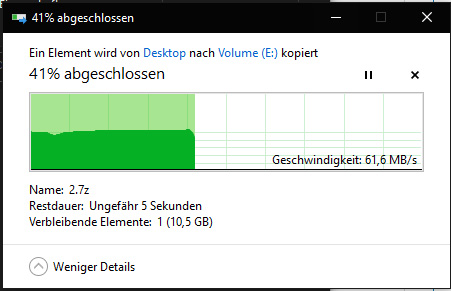 The rebuild took 1 hour and 22 minutes for the HDDs. 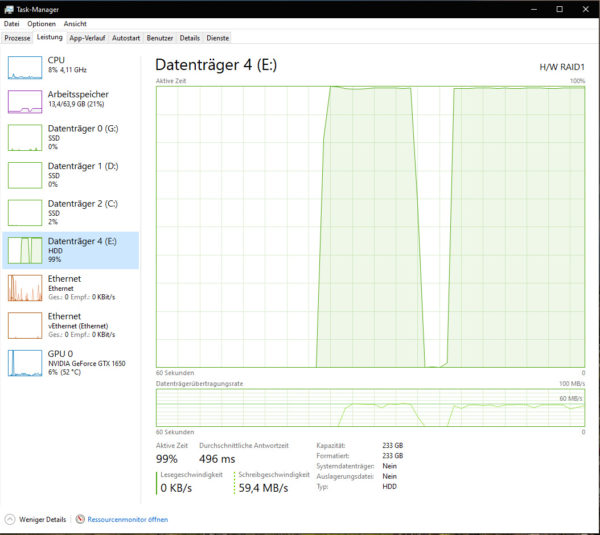 The maximum data rate was tested with two 250 GB SSDs, an Intenso and a Samsung Evo 850. The controller then reports with SSDs.

Even though the sequential read speed of a 1 GB data set from CrystalDiskMark is higher than the maximum specified data rate of the installed chipset with over 510 MB/s, the sequential write speed of 450 MB/s is already significantly lower. 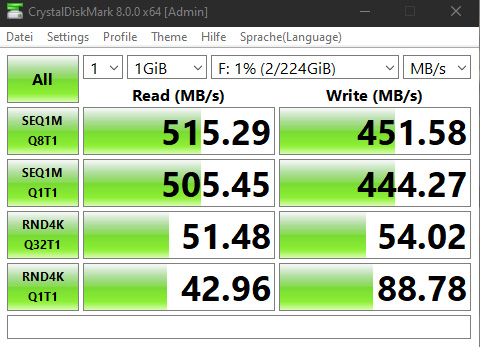 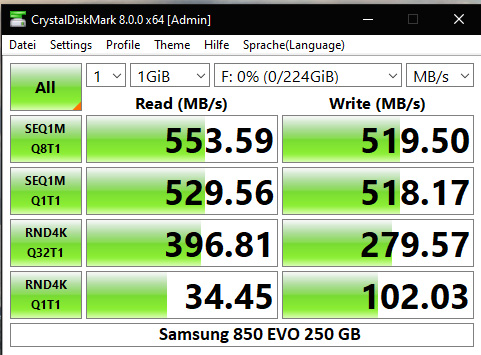 The Intenso SSD with almost 560 MB/s read and 490 MB/s write. The difference between directly connected SSDs and the RAID controller becomes clearer in the random performance. Here, the performance drops by almost 90% in both read and write. 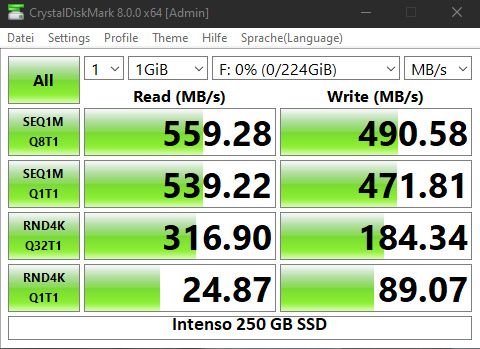 If you increase the test size to 2 GB, the write performance collapses to below 200 MB/s in the random test. 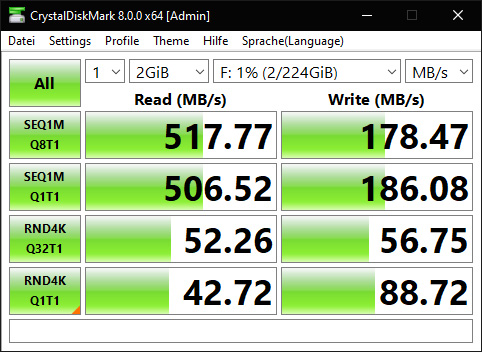 The write performance even drops quite quickly to just under 55 MB/s with a test size of 8 GB. However, there was no data corruption in the test because there was no time-out. 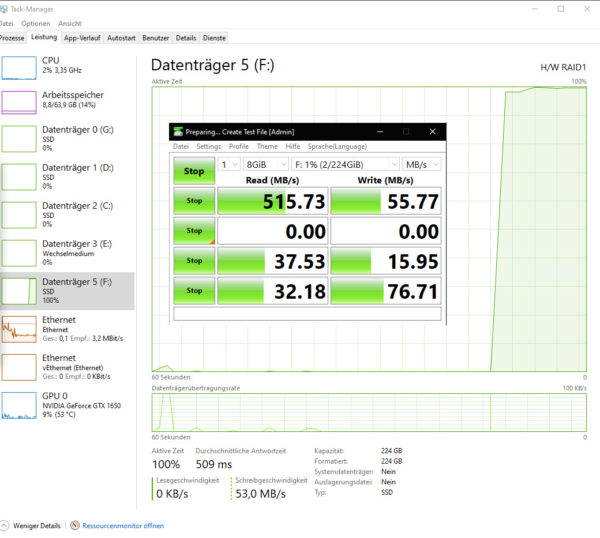 However, the read speed remains high throughout.

The rebuild time with the SSDs is only 15 minutes. The media files work without problems after a rebuild in both HDDs and SSDs.

The temperatures of the data media cannot be read out, the removable frame gets noticeably warm at least during the rebuild of the HDDs. This indicates that the heat dissipation via the metal works well. Nevertheless, the removable frame should only be used in well-ventilated cases.