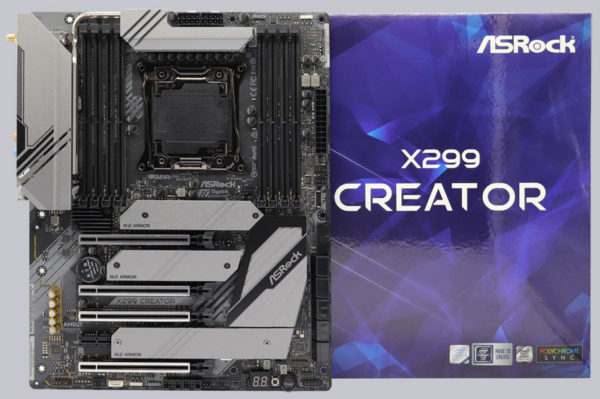 The ASRock X299 Creator has a Dr. Debug 7-segment LED postcode display, LED illuminated buttons for power, offers three fast Ultra M.2 slots for PCIe Gen3 x4 modules with up to 32 Gb/s connection. On the following picture you can see the five PCIe 3.0 slots and the three M.2 slots, all three M.2 sockets are equipped with heat sinks. 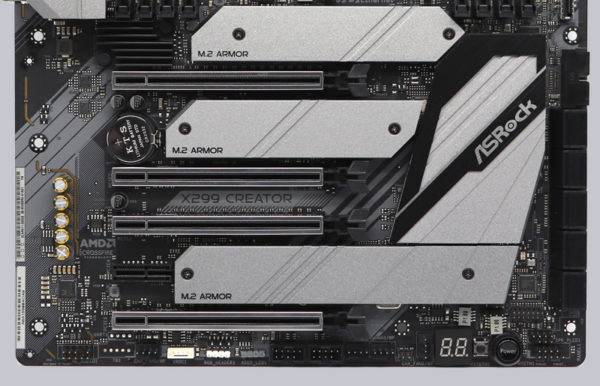 We have tested the X299 Creator with a Crucial P1 1TB M.2 PCIe 3.0 x4 NVMe 32Gb/s SSD as you can see here with the M.2 cooler removed. Before putting on the M.2 cooler, make sure to remove the blue protective foil of the heat conduction pad on the corresponding M.2 SSD. 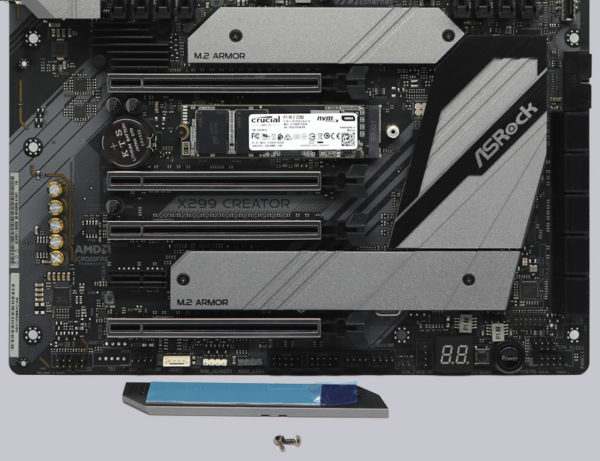 The two white 4-pin 12V RGB headers can be connected to conventional 5050 RGB stripes as usual, for example to illuminate the housing. And there are also two grey polychrome RGB connectors that support individually addressable LEDs in addressable RGB stripes via the WS2812B. 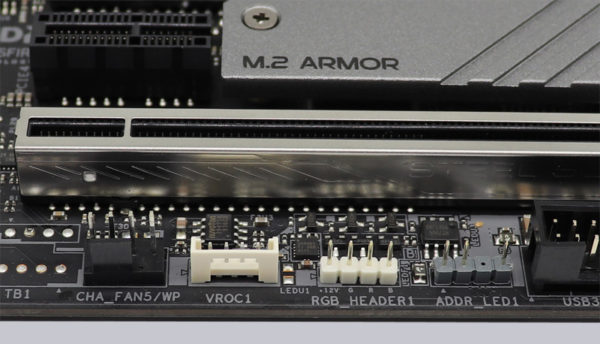 With the Creator series, however, ASRock has no RGB lighting integrated on the chipset cooler or I/O cover, so an external solution via the RGB/aRGB headers would be necessary if desired.

The RGB/aRGB headers are controlled by the included ASRock Polychrome RGB LED software. There you select for example the colors in a RGB color selector and can set whether the RGB headers should be controlled separately or together with the aRGB headers. Of course you can also disable the lighting completely or apply it to all connectors at the same time depending on the effect. 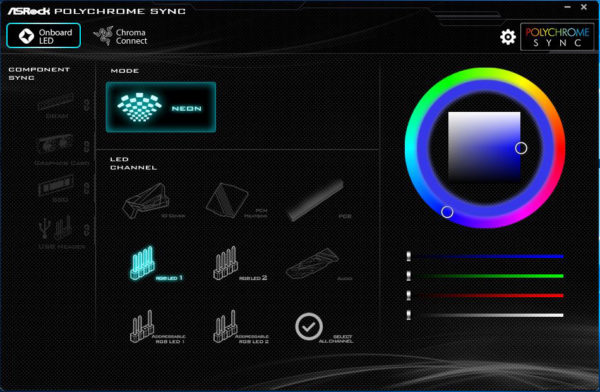 In the ASRock Polychrome RGB LED software, for example, you select the colors in an RGB color selector. The lighting can of course be deactivated completely. And with the addressable RGB LED connectors you even get completely new RGB features such as Spring, Meteor, Stack, Rainbow, etc. 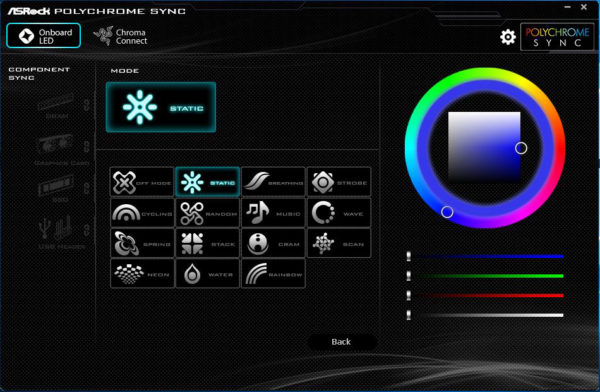 So there are a lot of great RGB effects for externally connected LED Stripes, which we presented in the ASRock Polychrome RGB Software Video on our OCinside YouTube channel.
Note: Please allow our cookies first to see this content!

By the way, you can address up to 100 LEDs individually. 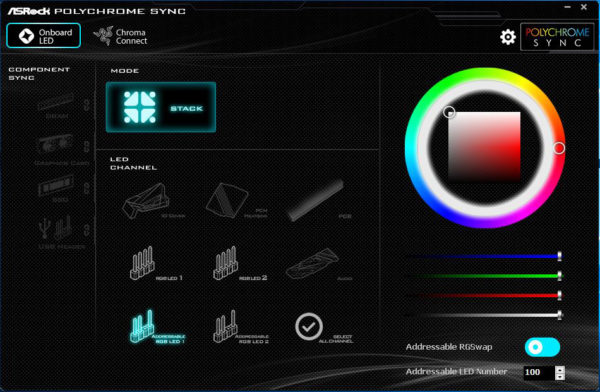 But let’s get back to the equipment. On the left, you can see the front USB 3.2 Gen2 type-C connector, two of the seven fan connectors, the 24-pin ATX power connector, some Nichicon capacitors and the second RGB connector.

The picture shows the side view of the motherboard with the large heat sink on the MOSFETs. More exactly it is a heatsink, which rests on a row of MOSFETs and was connected to a second heatsink by means of a heatpipe.

Since the heatsink also serves as I/O cover, the MOSFET heatsink can be screwed off directly. Here you can see the two unmounted aluminum heatsinks, one of which is pressed onto the voltage converters by means of a thermal pad. 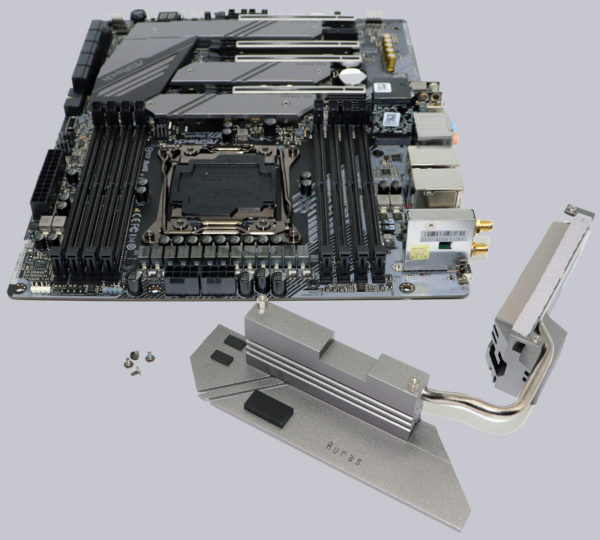 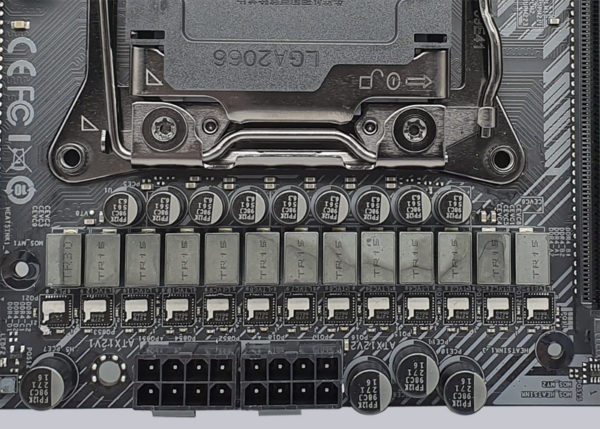 Here you see again the Intersil 27B MOSFETs at the 60A coils, which are responsible for the power supply of the Intel CPU. The power supply is realized via the Dual Power Connector, i.e. two 8-pin 12V power supply connectors.

The ASRock X299 Creator Board can be equipped with up to eight DDR4 modules and can be upgraded up to 256 GB RAM depending on the operating system used (see list). Here you can see a picture of the eight DDR4 memory slots with Quad Channel support. 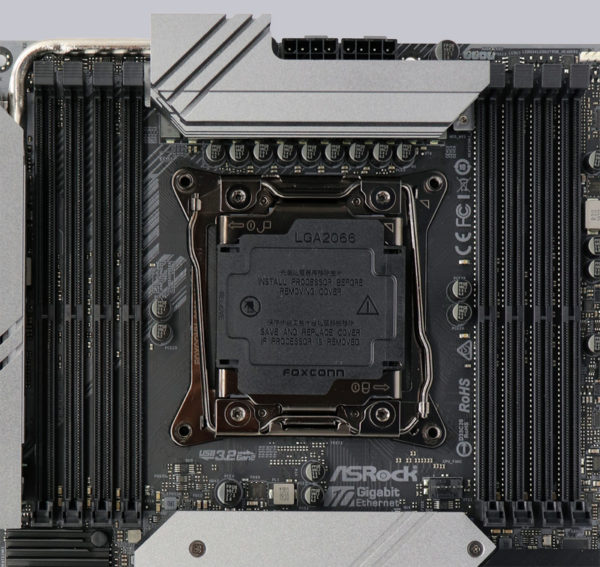 The ASRock X299 Creator offers a total of ten angled SATA3 ports, two of which are controlled via the ASMedia ASM1061 controller.

The SATA3 ports support RAID 0, RAID 1, RAID 5, RAID 10, NCQ, AHCI and the hot plug function in AHCI mode (AHCI stands for Advanced Host Controller Interface and should be selected for SSDs in UEFI). Thanks to UEFI BIOS, drives with more than 2TB can also be used for Windows 10 x64 installation. The installation of the drivers went without problems in Windows 10, so the 64 bit Windows 10 installation was done quickly.

The RAID drivers can be installed via the Easy RAID Installer point in UEFI. The drivers for Windows 10 are delivered on DVD and are also available for download on the ASRock support page.

An important feature for USB-C monitor owners is the combination of the two USB 3.2 Gen2 Thunderbolt3 ports with the two Mini DisplayPort inputs, because via mini DisplayPort to DisplayPort cable the graphic card signal can be looped through to the Thunderbolt USB-C ports! 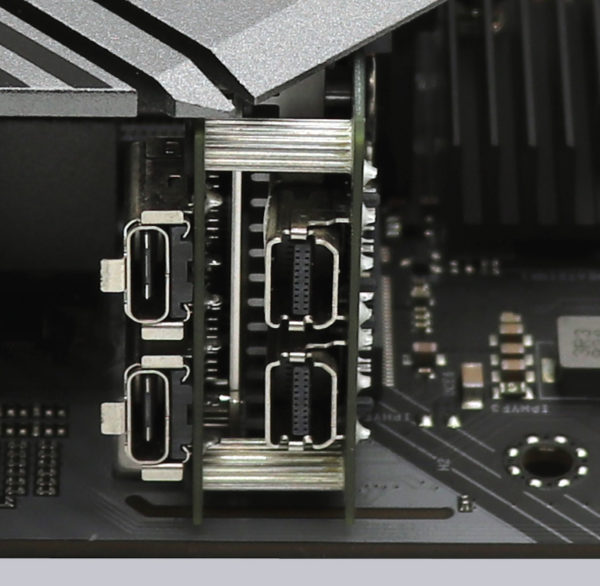 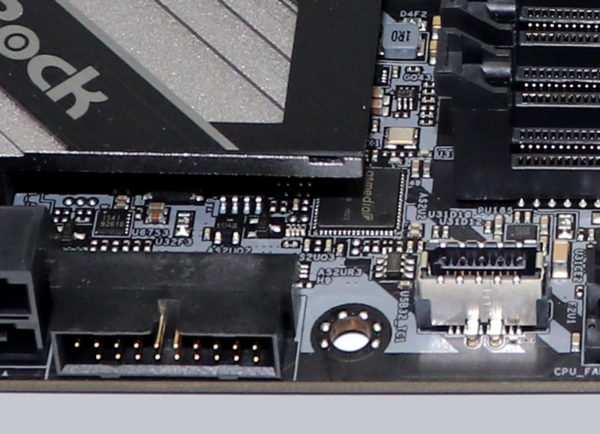 The ASRock X299 Creator has an Aquantia AQC107 chip for 10 Gigabit LAN and was also equipped with an Intel I219V, with which an additional 10/100/1000 network port is realized on the ATX panel. The Intel LAN port is WoL capable, offers LAN cable detection, supports energy efficient Ethernet according to the 802.3az standard, PXE and more. 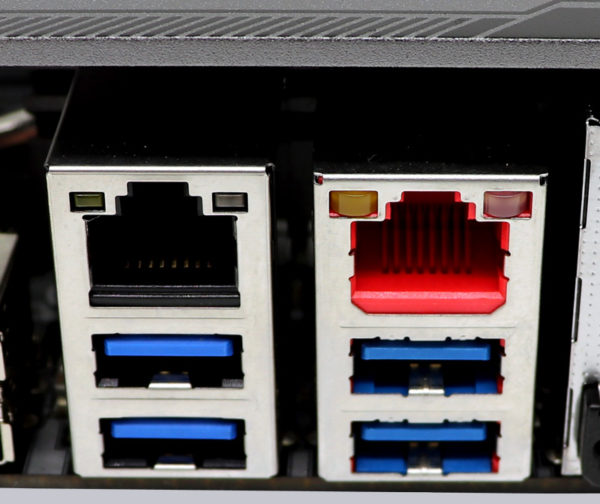 Also the ASRock X299 Creator motherboard has again the better Realtek ALC1220 Audio Codec with Content Protection, 120dB SNR DAC, TI NE5532 Premium Headset Amplifier and Purity Sound 4, which supports 7.1 surround sound and outputs it for example analog over 5x 3.5mm jacks on the ATX panel or over the internal front panel audio connector. There is also an optical SPDIF digital output and premium Blu-Ray support. So an additional soundcard with digital outputs is not necessary for most users. 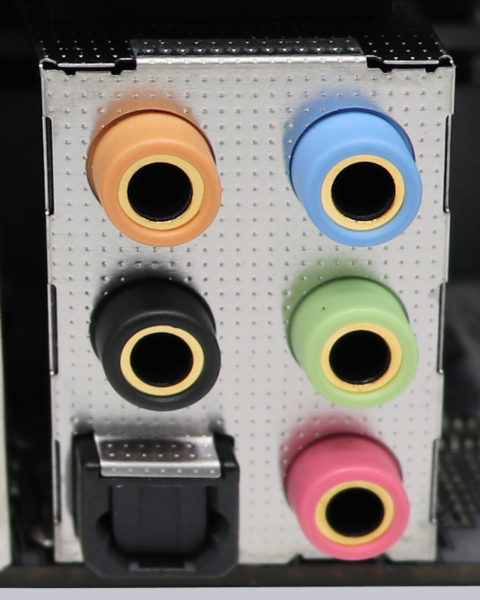 Now we come to the Intel LGA 2066 CPU socket. The socket was again equipped with two levers, which are operated one after the other to press the CPU evenly onto the pins in the socket. As always, you should never touch the contacts during installation or even bend the contacts in the socket. When storing or transporting the socket, it is essential that you fit the protective cap on the socket. If the pins are bent and the mainboard doesn’t work anymore, we are available for help and advice in Intel Forum. 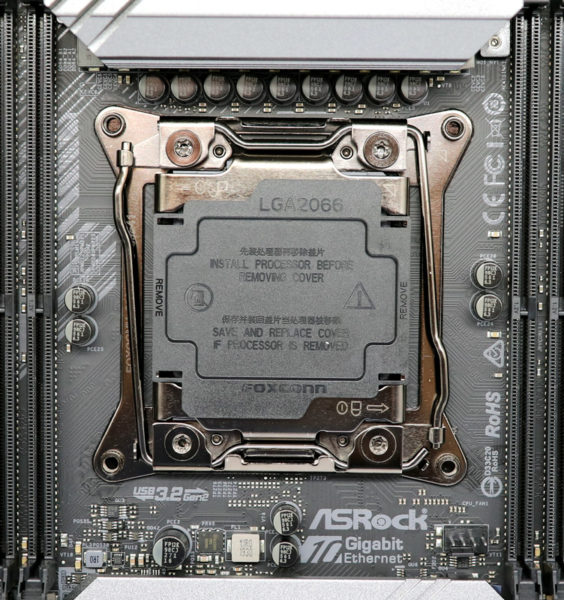 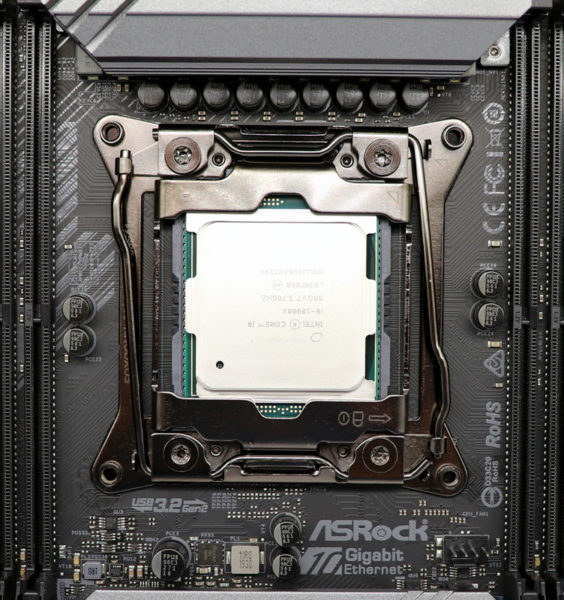 Here you can see the four DDR4 modules from Crucial in the ASRock X299 Creator motherboard. To give the Intel LGA 2066 CPU a high memory throughput, we used four Ballistix Sport DDR4 2666 16 GB BLS16G4D26BFSB modules. Intel Cascade Lake-X and Intel Skylake-X with 28 or 55 PCIe lanes processors support Quad Channel Mode, Intel processors with 16 PCIe lanes however only support Dual Channel Mode. So four of the eight possible memory modules are used on the Intel X299 Creators motherboard to get Quad Channel support with the Intel Core i9-7900X or with the Intel Core i9-10900X CPU. The Intel Cascade Lake-X processors even support DDR4-2933. 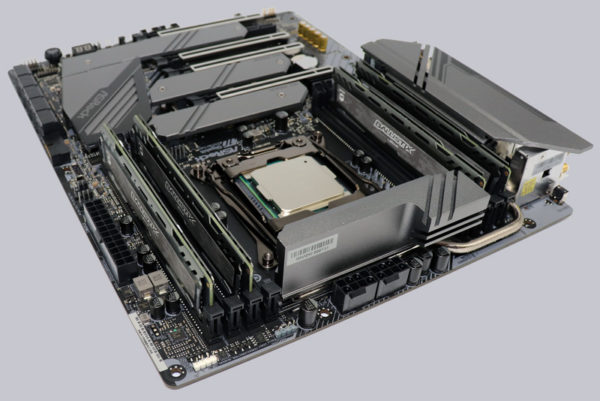 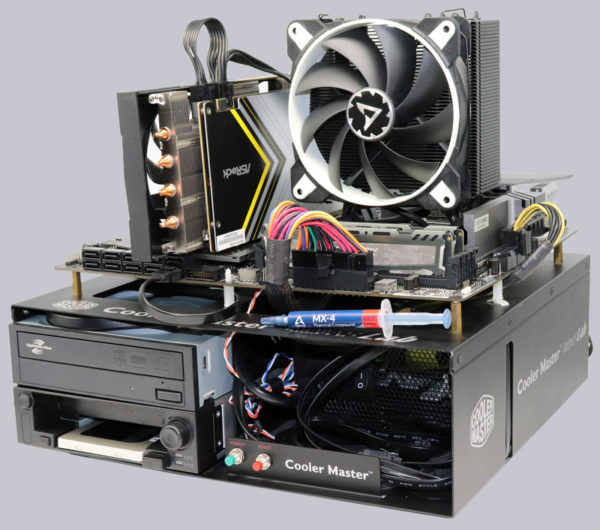 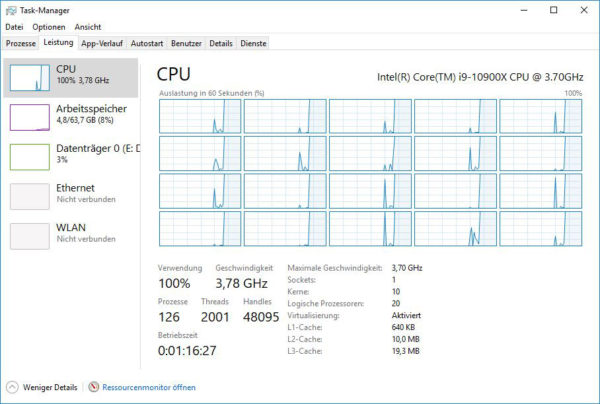 As you can see on the thermal image of the ASRock X299 Creator PC, the waste heat of the voltage regulators and coils is conducted to the second MOSFET heatsink via the I/O panel by means of a heatpipe, thus ensuring better heat dissipation. 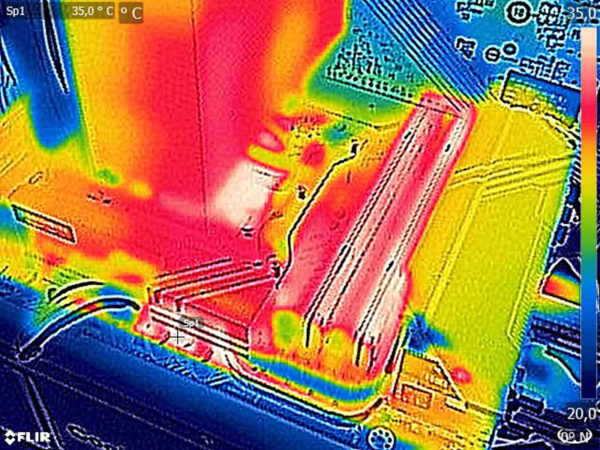