The motherboard is certainly no longer the decisive factor when it comes to the power consumption of a PC. Despite all that, we want to show you what the motherboard consumes and whether it can deliver accordingly under load.

Of course, the system’s energy consumption always depends on the installed components and their load. So that we could measure a reasonably accurate value for the idle state, we only equipped the motherboard with a RAM bolt, the CPU, an M.2 SSD and the CPU water cooling. 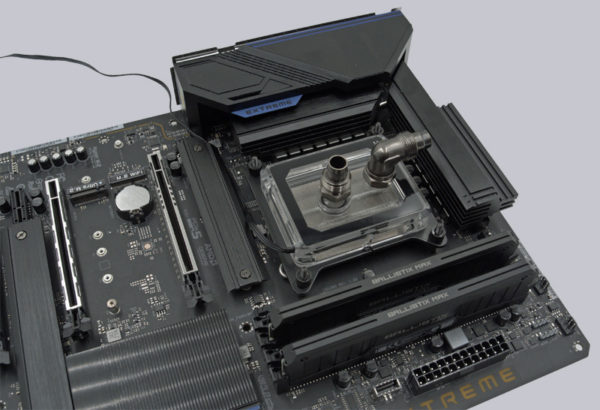 We measured an idle power consumption of 60 watts (minus 55 watts for the pump).

Afterwards, we naturally checked how the power consumption looks like with realistic equipment. Including the graphics card, 4 working memory bars, as well as 2 M.2 SSDs and 2.5 inch SDDs, we arrived at an idle value of 76 watts.

Under full load, with the power limits lifted and beyond 5 GHz, the power consumption was 385 watts. The heatsinks around the CPU socket didn’t get unnaturally hot here either, 50°C to be exact. The board also didn’t get particularly warm in Aida64’s system stability test, we could measure about 46°C. The total consumption was 478 watts. We measured the highest energy consumption with Cinebench 20 and Furmark in combination, which was 581 watts.