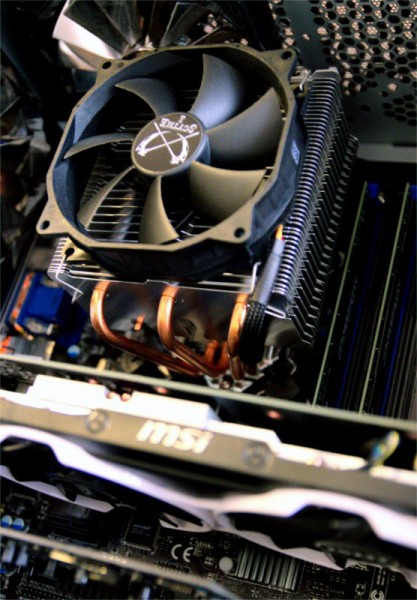 For silent mode we set the Scythe fan to 300rpm, for maximum cooling we continued with 1800rpm. Idle testing was done only running Windows and SpeedFan. Stress testing was done by using small-FFT test of Prime95. Energy saving features have not been deactivated in BIOS/UEFI for testing.

Here in comparison to the boxed cooler of the Intel Core i5-4460 and Enermax T40F-BK. The boxed cooler could not be tested in silent mode at high load, as the temperatures exceed the save operating range quickly. 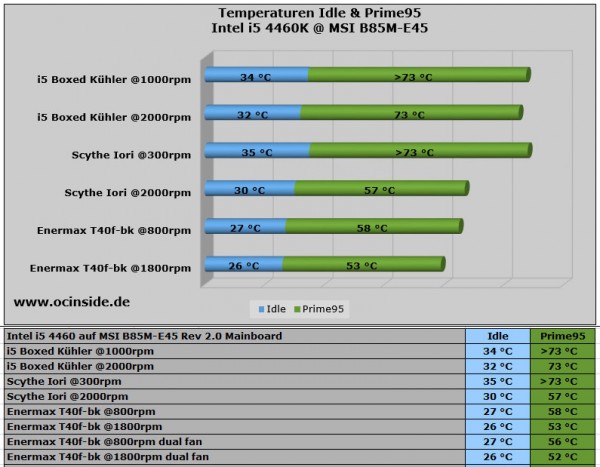 In silent mode the Scythe cooler is about on par with the boxed cooler. At maximum cooling capacity, the Iori can beat it easily and cools the processor at 100% load to absolutely acceptable 57°C.

At full fan speed the small Iori even comes close to the values of the much bigger Enermax cooler, recently tested by us. The subjective volume is much higher though, as the 10cm fan generates higher frequencies like the 12cm fan of the bigger cooler.

– At 300rpm the fan is inaudible even from a few centimeters away, but load temperatures well above 73°C are not recommended for use.
– At 1100rpm the fan is clearly audible but without unpleasant clacking or grinding.

An office PC can thus be silently cooled by the Scythe Iori without problems. But if your PC is going to produce more heat because of gaming or video rendering, you have to expect significant noise coming from the fan to not let the CPU overheat.

The differences in measuring the CPU temperature and how to overclock are further explained in our Intel Core i3, Core i5 and Core i7 OC guide.