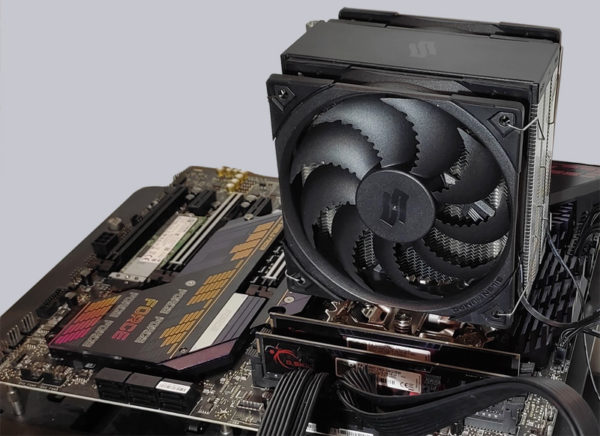 The SilentiumPC Fera 5 Dual Fan was tested on a testbench with an Intel Core i5-10600KF.

Using an instrument microphone, we measured the following dBA values from a distance of approx. 50cm:

A value of 10.0 dBA corresponds to almost absolute silence in a “normal” room without specific sound protection. At 25% PWM signal, the Fluctus 120 PWM fans run virtually inaudibly at 550 rpm. A quiet fan noise is only heard at about 1100 rpm (50%) but even that is barely perceptible. From about 1500 rpm (75%) the fans are slowly audible with about 18 dbA, but still far from an annoying noise level. Above 1500 rpm (75%), however, the Fluctus are then clearly audible, with the maximum noise level measured at 1900 rpm (100%) at 23.2 dbA – which is still surprisingly quiet.

For testing, the fan speed was manually set to a fixed value with FanControl. The stress test is performed with Prime95 Setting TortureTest over 15 min. The sensor information was read out with HWInfo64 (see OC Software Download). 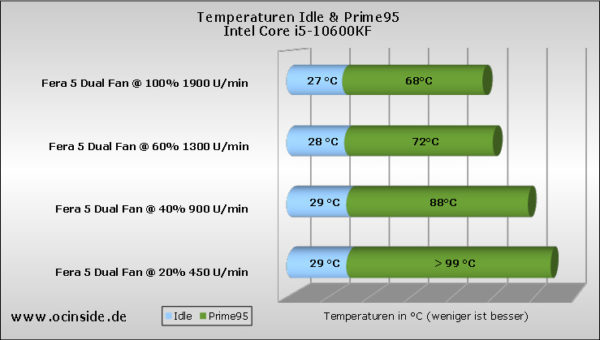 Even at a quiet 1300 rpm (60%), the SilentiumPC Fera 5 Dual Fan keeps the 6-core i5 10600KF clocked at 4.5GHz at just over 70°C in the Torture Test – which is a completely acceptable operating temperature for the CPU in this stress test. In everyday use, this CPU load will only be reached in very exceptional cases.

However, the temperature quickly increases at lower speeds – it was already almost 90°C at 900 rpm (40%) in the stress test and even lower speeds cause the CPU to run into thermal throttling.