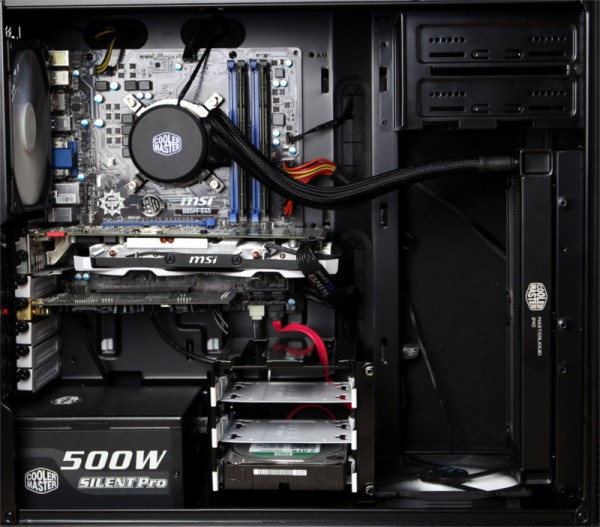 First, we have tested the cooler with full pump speed. With a PWM signal of 60%, the pump produces a less audible sound spectrum, so we took advantage of this setting for a second run.

Here is the Cooler Master MasterLiquid 240 compared to boxed cooler of Intel’s Core i5-4460. The Intel boxed cooler could be tested not under load in silent mode, because the temperatures to quickly ran out of control. 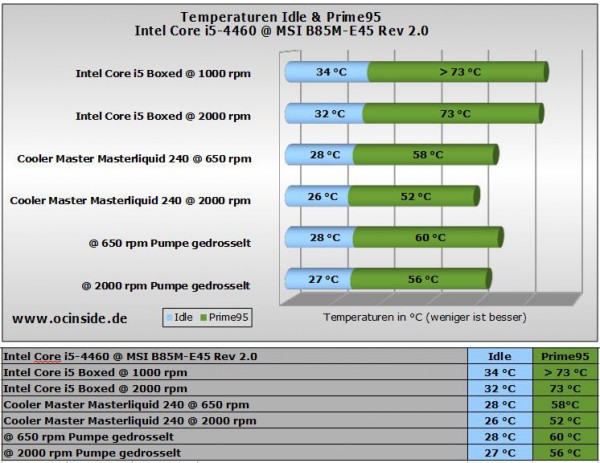 In the range of 75-90% the pump generated an unpleasant noise spectrum, so that this area should be avoided. Also notice that the pump is significantly louder when the speed is frequently changed. For us, a two-tier system seems to be ideal, ~ 60% (2000 RPM) for idle mode and 100% (2800 RPM) when the temperatures rise.

The fans are real sneaker! Not exceeding 900 rpm you can’t hear them about a half a metre away when the chassis is closed. At 2000 rpm, you can hear the noise of the air flow, but no noise of the fans themselves.

The cooling performance breaks no records, but it is in the midfield of the AiO coolers in the same size we have tested.

Because the supplied heat sink compound has a fairly low coefficient of heat control, we have done another test running with other paste of 8.5 W/mK: While the idle temperatures remained unchanged, the temperatures under load could be reduced about 2 °C!