Here you can see the front of the small Crucial MX500 1TB M.2 SSD. This time the SSD stickers were attached on both sides, whereby this side is provided with a special sticker from thin copper, in order to distribute the temperature of the controller better and to be able to dissipate faster over the surface.

You normally can’t remove the sticker, but of course we took it off carefully for the pictures on OCinside.de. Here you can see the Silicon Motion SMI 2258H Controller IC, the first Micron D9SHD Cache chip and four of the eight Micron NW913 Micron 64 Layer 3D TLC NAND chips of the SSD with a total capacity of 1000GB. We already explained the differences between TLC, SLC and MLC extensively in the Windows practical test of the Crucial BX200 480GB SSD. The MX300 was equipped with the 3D TLC NAND and the BX200 was equipped with a simple TLC NAND, which could only maintain a high writing performance via the SLC cache size. As we will see in the benchmarks, Crucial was able to find a better solution with the MX500. 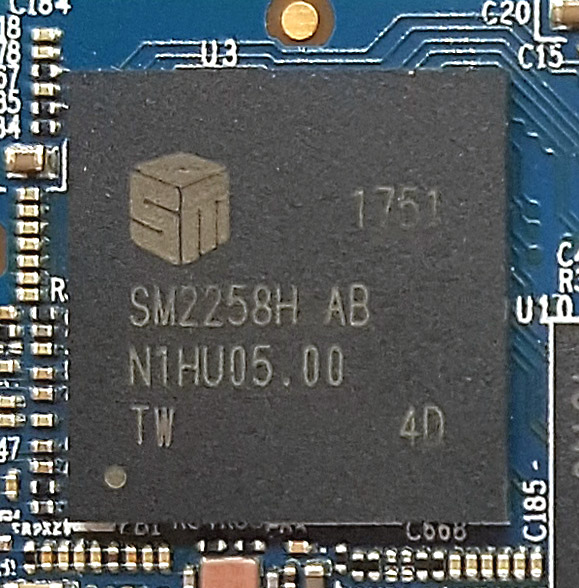 The back has the usual sticker with some technical data and the firmware version M3CR020, which was pre-installed. Under the sticker are the remaining four Micron NW913 NAND modules and the second Micron D9SHD 512MB cache module.

Since we would like to give more information and some practical experiences with M.2 SSDs, we have now added also a field test page.