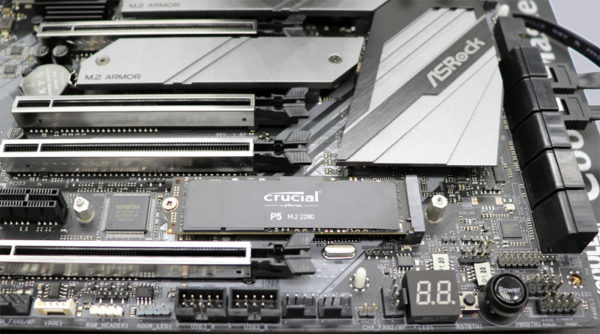 The P5 SSD was recognized without any problems on all systems and is listed in the UEFI for example under Advanced in the NVMe Configuration. 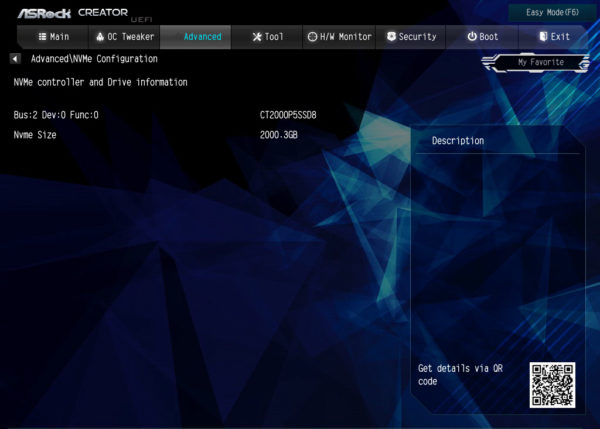 The NVMe SSD is now also listed under Drives in the Windows 10 Device Manager. 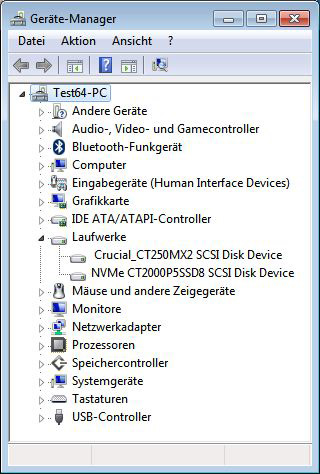 After the construction of the Crucial P5 2TB M.2 NVMe SSD and the quickly completed installation, we now come to the firmware update.

The P5 SSD was delivered with the P4CR311 firmware. At Crucial, this firmware version P4CR311 for the P5 as the latest SSD firmware available. With the Crucial Storage Executive Tool you can update the firmware of the SSD relatively easy, but as always you should backup important data before the firmware update. Alternatively, you can also use the classic method for updating the firmware: Download Crucial Firmware, unzip the contained ISO file, transfer the ISO file with unetbootin to a USB stick (alternatively burn it on a CD or CDRW), boot with the USB stick and the firmware update starts. 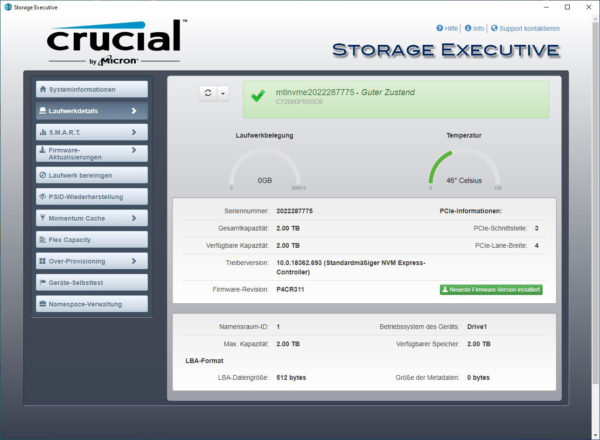 It also allows you to enable the Crucial Momentum Cache option and set the Over Provisioning range to adjust the SSD durability vs. performance. 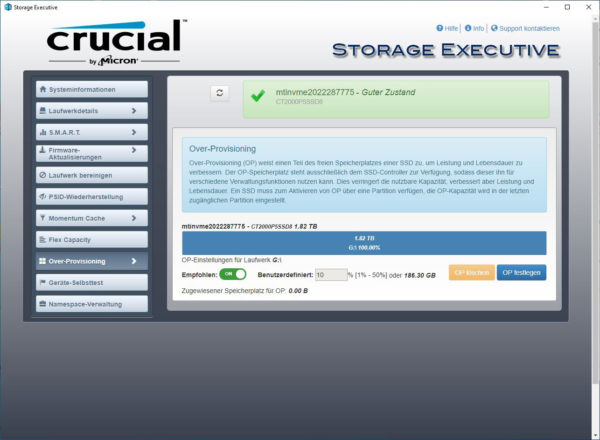 The secure deletion with Secure Erase is unfortunately not yet available with the Crucial Tool on the Crucial P5 2TB M.2 NVMe. Meanwhile, however, some motherboard manufacturers offer their own solutions in the UEFI BIOS, with which the SSD can be completely and securely erased within a few seconds. Here you can see for example the special ASRock NVMe SSD Sanitization Tool from the recently tested ASRock X299 Creator Intel LGA2066 DDR4 ATX motherboard. 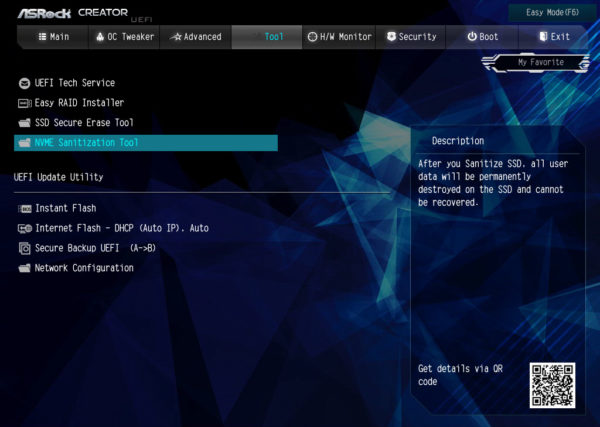 Simply select NVMe format or NVMe Sanitize for secure deletion without the possibility of recovery, for example when the SSD is to be sold. 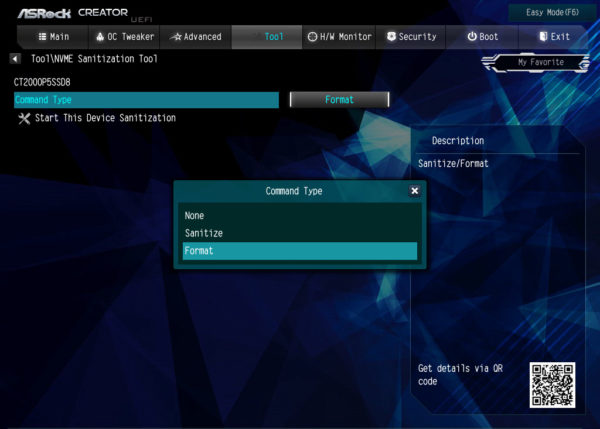 Then you start the SSD Sanitization and after a short time you get a completely and securely deleted SSD. 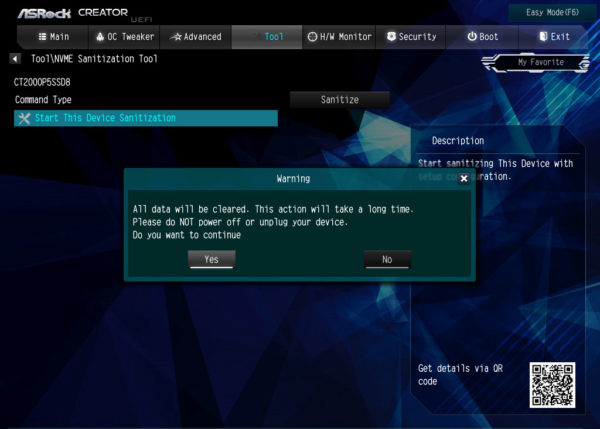 Due to recent issues we would like to give you some tips and hints for the M.2 PCIe NVMe SSD installation. Because by mail and in our Hardware Forums there are frequent inquiries about slow SSD speed. A PCIe SSD – both in the form of a PCIe plug-in card and a PCIe M.2 module – requires a high bandwidth for its fast performance. If the Crucial P5 NVMe SSD, a Intel 600p, Samsung Evo, Samsung Pro, Intel PCIe SSD PCIe 3.0 x4 SSD or other PCIe SSDs are too slow or are not recognized, it is usually because the wrong slot has been selected or the BIOS or UEFI has been set incorrectly or too many PCIe lanes are already in use.

We are looking forward to help you in PC Forum under Hardware – just create a new post and write which motherboard is used and which PCIe M.2 SSD has been installed. If you have not yet purchased an SSD, our community will also be happy to provide you with the appropriate SSD purchase assistance.

The PCIe 5.0 x1 standard starts at 3938 MB/s (all specifications are maximum values without protocol overhead).

You can check the correct connection for example with the previously mentioned Crucial Storage Executive Solid State Drive Software.

Also very important is the correct NVMe driver for the NVM Express Controller. We have tested the Crucial P5 NVMe SSD with the latest Windows NVMe driver. If you want to know more about M.2 SATA, M.2 PCIe, 2280, Gen2 x2, etc., you should take a look at the Plextor M6e test, where we have explained all important formats, connections and speeds of the M.2 standard.

If you want to install an NVMe PCIe SSD on Windows 7, you will probably find that the M.2 NVMe SSD is not recognized. Since the M.2 NVMe SSDs only entered the market after Windows 7, you have to install the appropriate Windows 7 NVMe Hotfix first. If you want to install Windows 7 on a NVMe SSD, you would have to include this NVMe SSD hotfix in the Windows 7 ISO or install Windows 7 on a SATA SSD, install the driver and hotfix and then transfer it to the NMVe SSD. If you need help, please contact us at PC Forum. Of course we recommend the NVMe PCIe SSD installation under Windows 10, because Microsoft has stopped supporting Windows 7.

Before we continue with the benchmark results, we would also like to discuss the temperature of the SSD.

According to the internal temperature sensor, the temperature reached about 69°C after a longer benchmark load, which is quite common for such a high-performance PCIe 3.0 x4 NVMe SSD. As a special feature, we also check the SSD temperature with thermal images at OCinside.de. For the thermal images we use an infrared thermal camera, which supports image overlay and thus creates an interesting mixture of the infrared image and the real image. Externally, we were able to measure an SSD temperature of over 74°C under load and an internal protection function can already be used there! The thermal image also shows that the temperature increase only affects the controller IC and not the NAND modules, as usual. 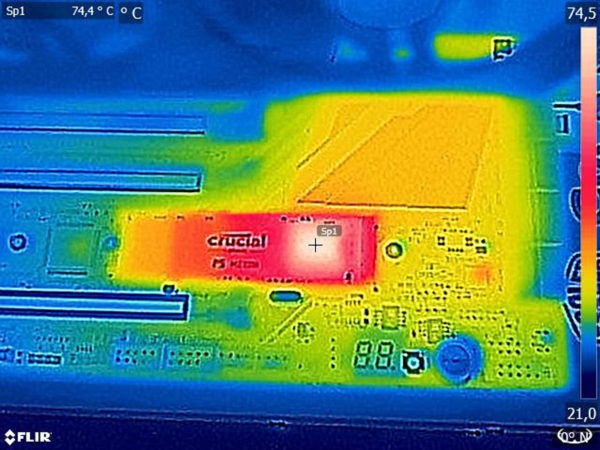 Recently we have shown an interesting video in our OCinside YouTube Channel where we filmed a Crucial M.2 SSD with our thermal imaging camera while the AS SSD benchmark is being completed. So that one does not have to wait quite so long, the IR thermal film runs at 4x speed.

Some motherboard manufacturers have also detected the M.2 temperature problem and now integrate heat sinks into the M.2 socket, as we recently saw on the ASRock Z390 Phantom Gaming X motherboard.