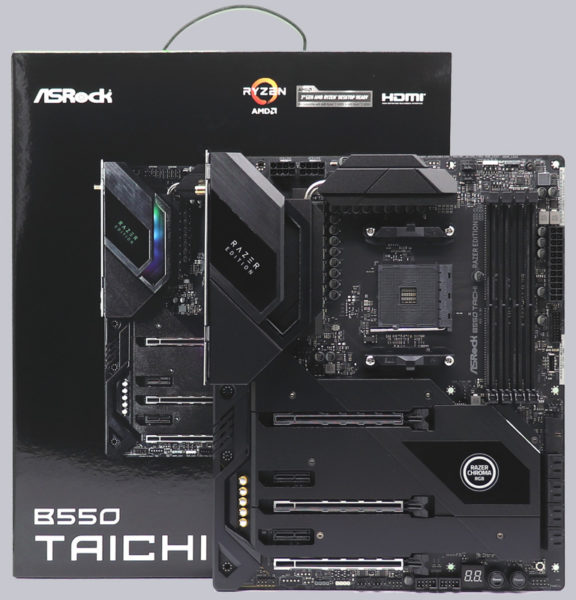 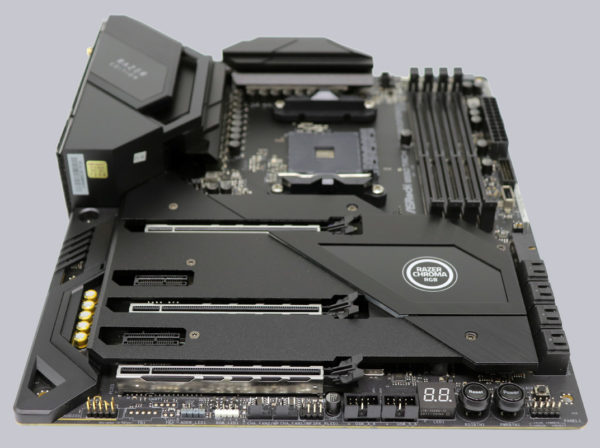 The two Hyper M.2 slots have been mounted under several coolers and the AMD B550 is passively cooled in contrast to the AMD X570 chipset. 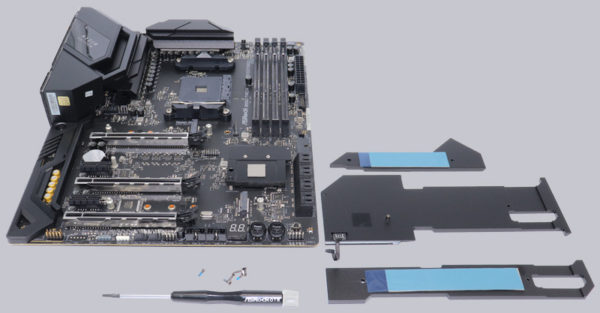 As you can see here, we tested the B550 Taichi Razer Edition with a Crucial P5 2TB SSD. ASRock conveniently includes a matching Torx screwdriver for the T8 Torx screws. 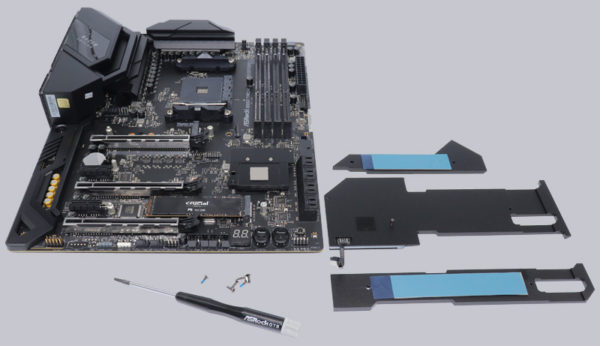 Fortunately, each heatsink can be disassembled individually, so you don’t have to unscrew the illuminated chipset cooler for an SSD swap. 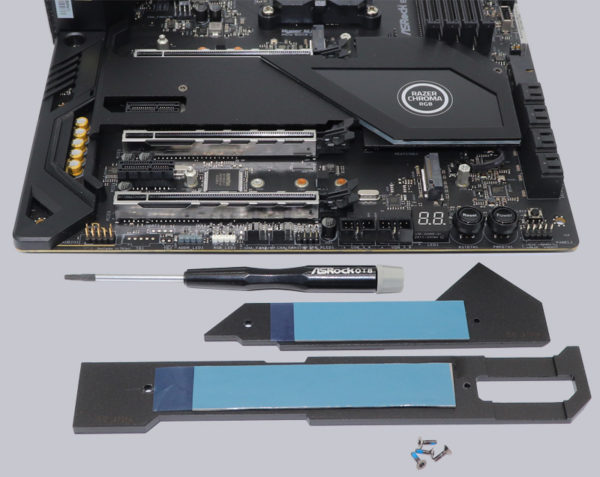 RGB lighting has certainly already become a purchase argument for many and ASRock has done something for that as well. You can connect conventional RGB strips to the white 4-pin 12V RGB headers, for example to illuminate the case. Addressable RGB strips with individually addressable LEDs can be connected to the gray 3-pin 5V aRGB connector.

Additionally, the B550 Taichi Razer Edition has a second 12V RGB LED connector and a second 5V aRGB connector in the upper area.

And the best thing is that there are already some addressable RGB LEDs under the chipset cooler, under the motherboard … 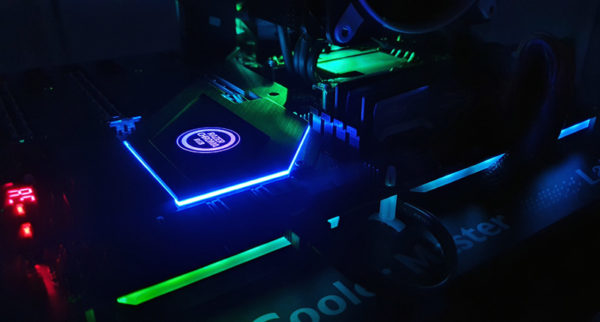 … and are pre-installed in the I/O panel on this motherboard. 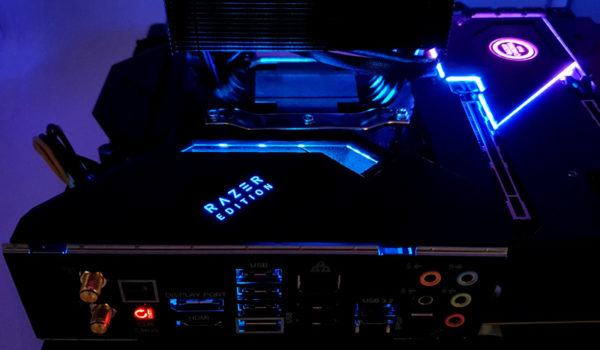 The RGB headers and the integrated RGB LEDs are controlled either via UEFI or via the special Razer Synapse 3 RGB LED software that can be downloaded from Razer to install the desired modules. 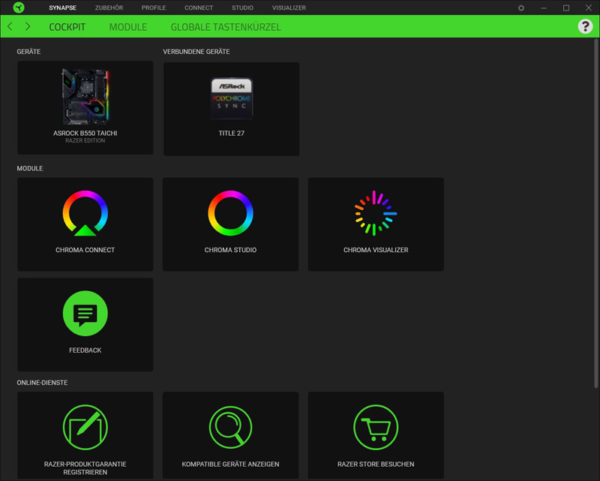 In the Razer Synapse 3 software, for example, you select the colors and effects and can set whether the RGB headers should be controlled separately or together with the RGB lighting under the motherboard, chipset cooler and IO cover. In total, you can address up to 80 addressable LEDs individually. Of course, the lighting can also be completely deactivated. 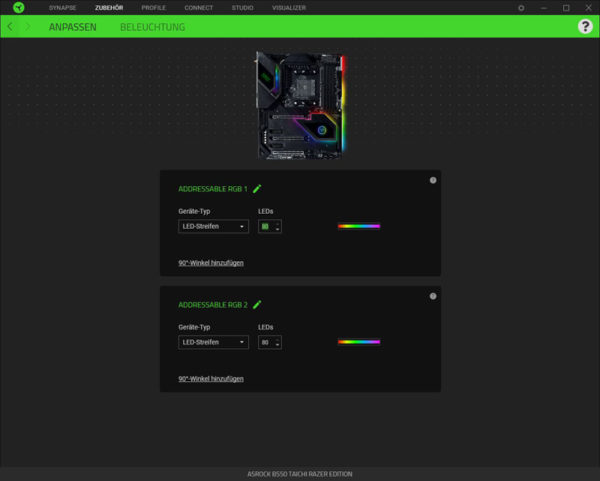 But that’s not all! The Razer software offers a lot of additional features, which we have presented in a Razer Synapse 3 video tutorial on our OCinside YouTube channel. If you don’t know this RGB software yet, don’t miss the video, it’s worth it.
Note: Please allow our cookies first to see this content!

Here you can see the two additional RGB and aRGB connections on the right, one of the two internal USB3.2 Gen1 headers as well as the USB3.2 Gen2 Type-C front panel connector on the left and the 24-pin ATX power connector in the middle.

The picture shows the side view of the motherboard with the two large XXL aluminum alloy heatsinks on the Intersil MOSFETs.

The I/O panel cover with RGB connector is installed above the heat sinks. 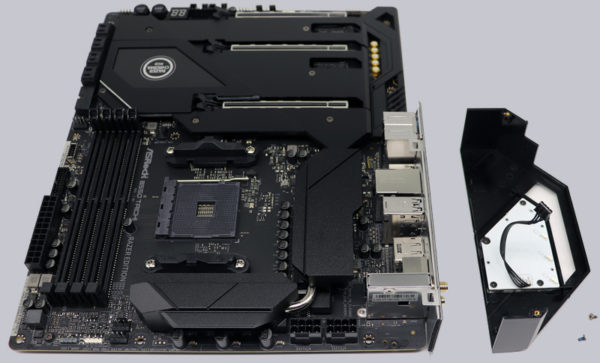 The so-called Smart Power Stage area is cooled underneath the two heatsinks of the ASRock B550 Taichi Razer Edition. Here you can see the two disassembled aluminum heatsinks, which are connected via heatpipe and pressed onto the voltage converters together with the heat conduction pads. 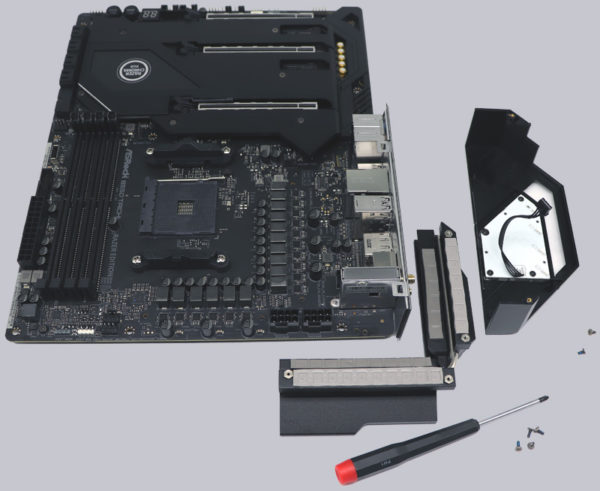 Here you can see the coils again as well as the phases, which consist of a total of 16 Vishay SiC634 50A phases to ensure a stable voltage supply for the AMD CPU. The recently tested ASRock X570 Extreme4 motherboard, however, was supplied with only 10 phases. 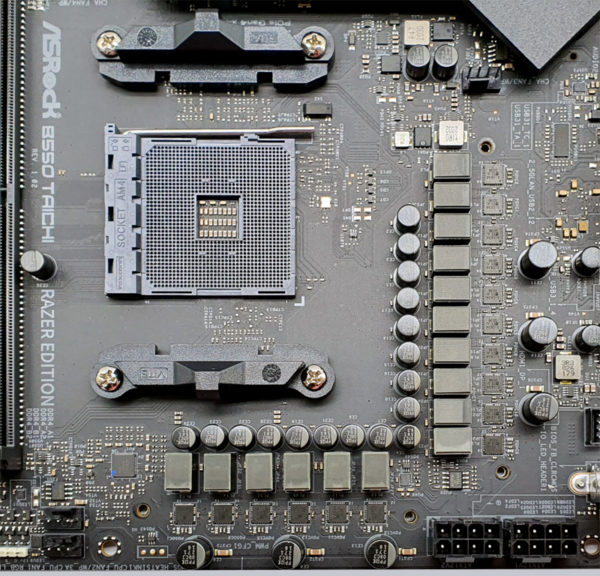 Six of the sixteen Vishay SiC634 50A phases can be seen here. 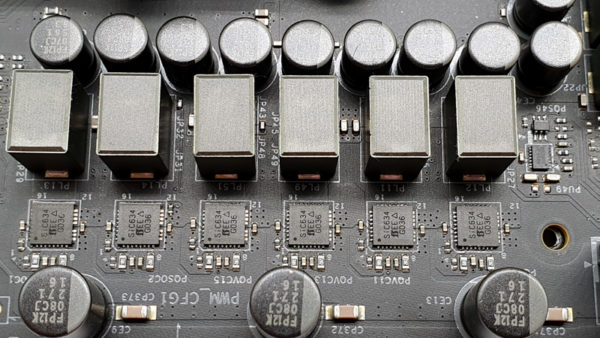 The ASRock B550 Taichi Razer Edition board can be equipped with up to four DDR4 modules and is upgradeable up to a maximum of 128 GB RAM depending on the operating system used (see list). Here you can see a picture of the four DDR4 memory slots with dual channel support.

Thanks to XMP support (Extreme Memory Profile), XMP memory modules are set correctly with a mouse click in UEFI and there are of course many more memory adjustments as well as even more OC options, but more on that later. Which exact RAM modules are officially supported should be read on ASRock’s memory support page before buying, because this is very important especially (but not only) for AMD Ryzen systems.

The AMD SATA3 ports support RAID 0, RAID 1, RAID 10, NCQ, AHCI and the Hot Plug function and even for NVMe SSDs there is a RAID adjustment in the UEFI. Thanks to UEFI BIOS, drives with more than 2TB can also be used for the installation of Windows 10 x64. The installation of the drivers went without any problems in Windows 10, so the Windows 10 installation was done quickly.

The RAID drivers can be installed via the Easy RAID Installer item in the UEFI. The drivers are included on DVD for 64-bit Windows 10 and are also currently available for download on the ASRock support page.

The ASRock B550 Taichi Razer Edition has two USB 3.2 Gen 2 ports, four USB 3.2 Gen 1 ports and two USB 2.0 ports on the IO panel. In the picture, you can see the USB 3.2 Gen 2 Type-A on the right and the dual-sided USB 3.2 Gen 2 Type-C port below it. Tip: By the way, the framed port is the USB port that can be used for USB BIOS Flashback to flash the BIOS without a CPU. 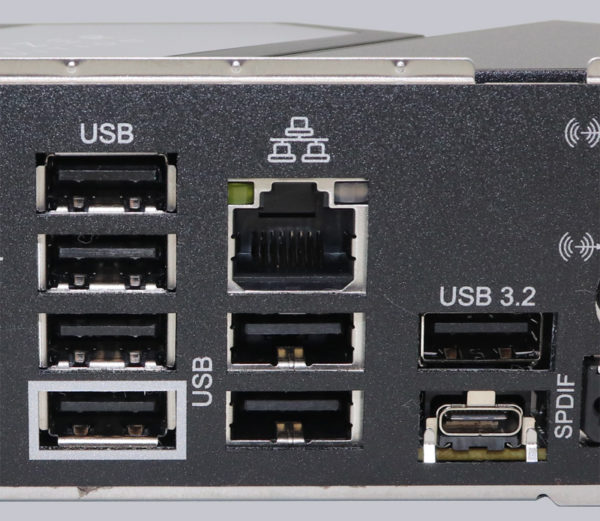 The ASRock B550 Taichi Razer Edition is equipped with a Killer E3100X, which provides the 10/100/1000/2500 network port on the I/O panel. The LAN port is WoL capable, offers LAN cable detection, support energy efficient Ethernet according to the 802.3az standard, PXE, Killer DoubleShot Pro, the Killer LAN software and more. 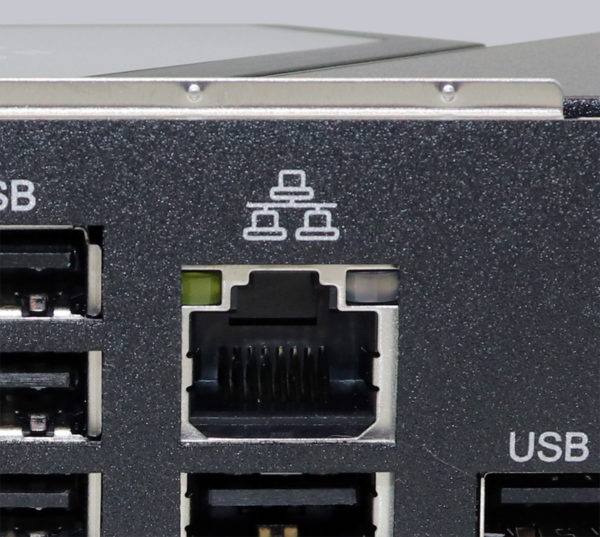 The ASRock B550 Taichi Razer Edition motherboard features the simpler Realtek ALC1220 audio codec with content protection and Nahimic audio support, which supports 7.1 surround sound and outputs it analog via 5x 3.5mm jacks on the ATX bezel or via the internal front panel audio connector, for example. Furthermore, there is an optical SPDIF digital output and premium Blu-Ray support. Thus, an additional sound card with digital outputs is unnecessary for most users. 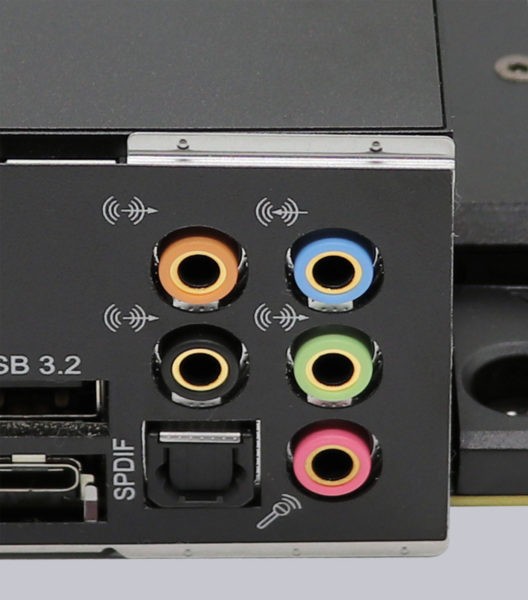 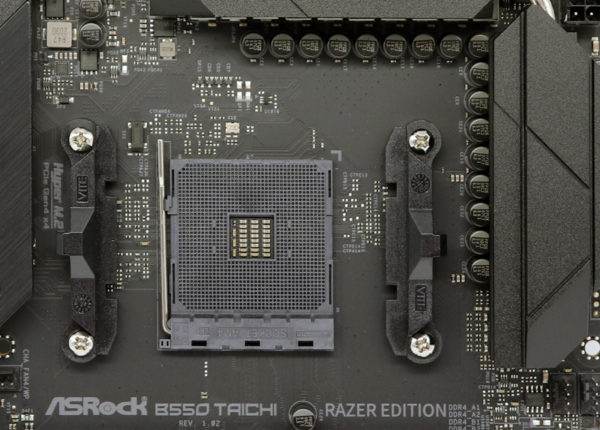 We tested the ASRock B550 Taichi Razer Edition motherboard with the AMD Ryzen 7 3800X processor. 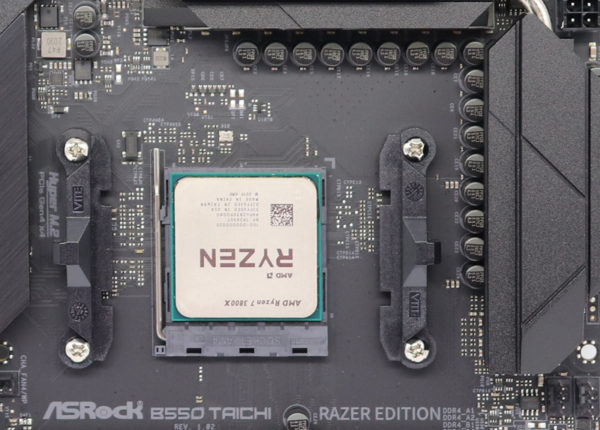 AMD Ryzen 3000/4000/5000 processors support the Dual Channel Mode. Thus, the two memory modules are used on the AMD B550 motherboard to get Dual Channel support. 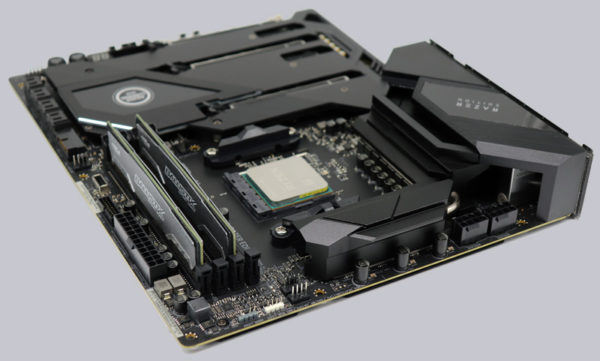 Here you can see the RAM configuration from the side. 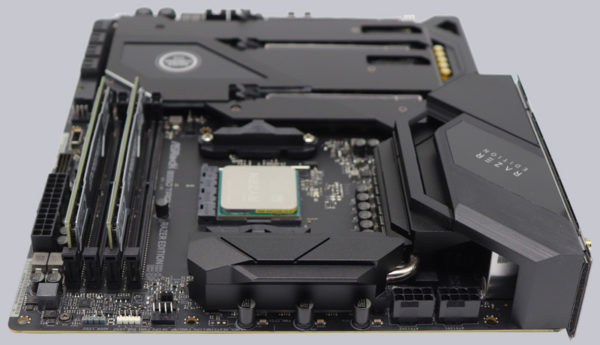 We are currently using an Arctic Freezer eSports cooler with Arctic MX4 thermal paste on the AMD Socket AM4 system. In the following picture you can see the AMD AM4 test system with Arctic cooler and Icy Dock MB171SP-B Turbo Swap removable frame for quick swap of SSD and HDD. 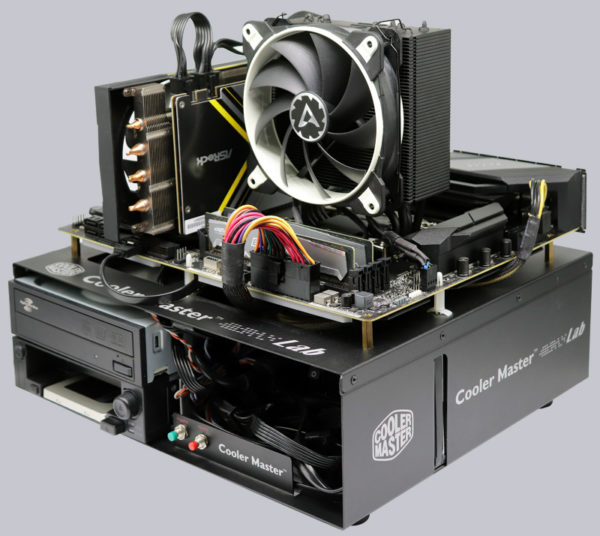 And this is how the system looks with Ballistix Tactical Tracer RGB 32GB DDR4 2x 8GB DDR4 memory, which, by the way, cannot yet be controlled via the Razer Synapse 3 software. 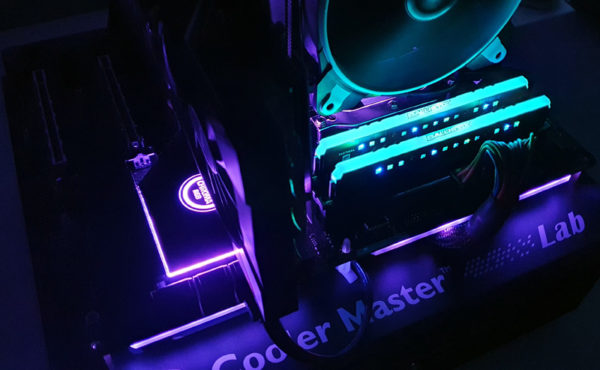 First of all, you should of course install the latest AMD driver package for this B550 motherboard. 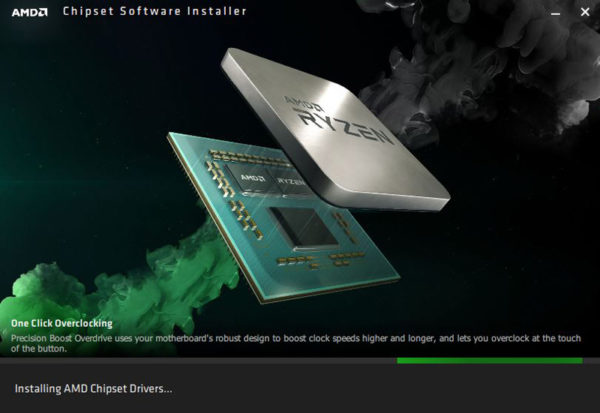 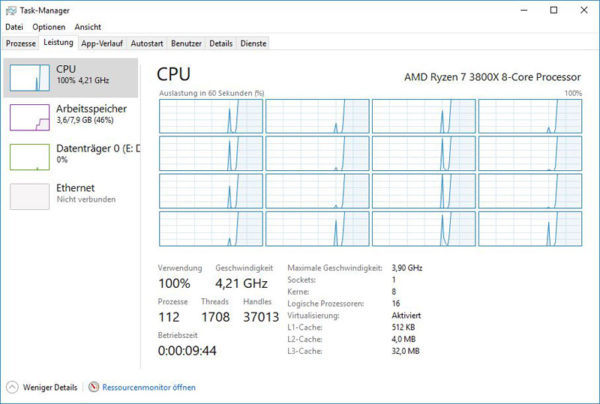 As you can see on the thermal image of the ASRock B550 Taichi Razer Edition test PC, the waste heat from the voltage regulators and coils is well distributed over the heat sinks and thus also sensibly dissipated. 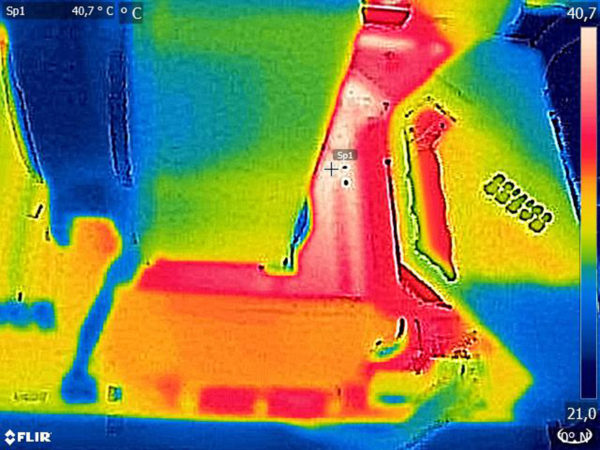