Let’s finally take a look at the motherboard. The optical layout of the Z690 Valkyrie looks very tidy thanks to the many heatsinks. Details like the Valkyrie logo and some highlights stand out well from the black base coat and provide a subtle contrast. It is also noticeable that Biostar has dispensed with any PCIe 1x slots on the motherboard. Freely according to the motto: CPU, RAM and 1-2 graphics cards should be enough! 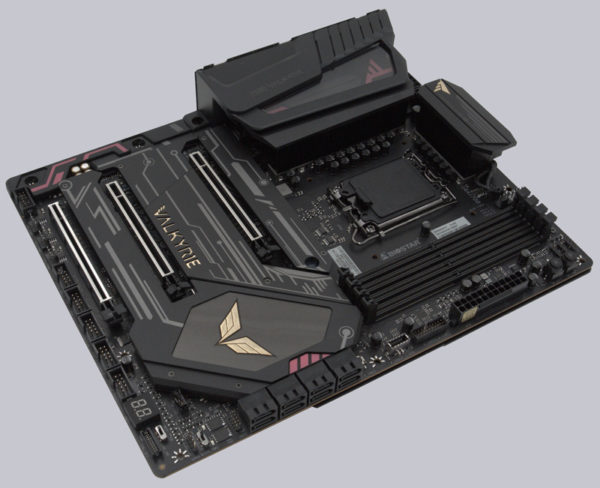 That this is actually not the case can be seen here. After removing the massive cooling plates, a total of four M.2 slots for SSDs and one M.2 slot (E-Key) for the Wi-Fi module are revealed. Three of the M.2 M-Key connections are connected with 64 Gbit, the lower fourth only with 32 Gbit. All SSDs of the sizes 2230/2242/2260 and 2280 can be installed here. 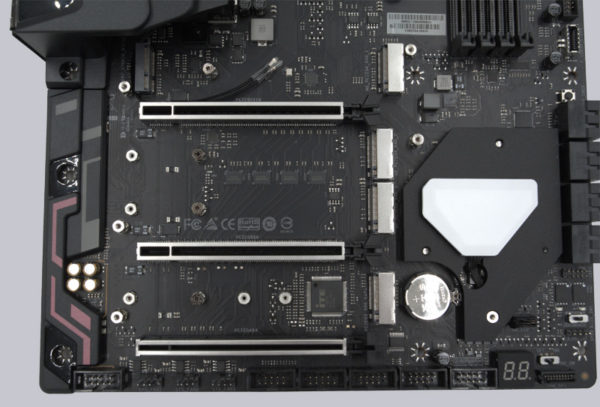 By the way, the installation of the 2 Wi-Fi antennas on the Wi-Fi module can be a bit exciting if an SSD is installed opposite. Biostar has not left much room here. 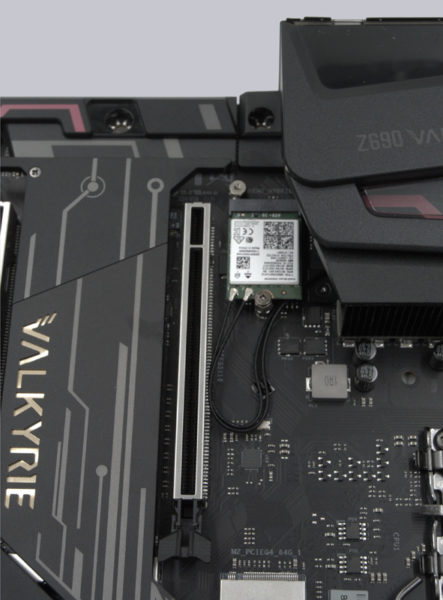 Next, let’s take a look at the motherboard’s IO connection. In short, there is nothing missing here, because besides Thunderbolt, there is even a serial IO connector. In addition, Biostar has given the board a debug display, a dual BIOS with a corresponding toggle switch and an LN2 mode. If you’re also looking for a TPM connector, you’ll find it here as well. It is also practical that there are 3 fan connections, which makes clean cable management no problem.

A well-cooled board is the key to long-term, stable overclocking. Biostar’s Z690 Valkyrie does not need to hide here. The capacitors are designed for 105 °C and are also available in sufficient quantities. In addition, the 20-phase VRM is kept in check by two very solid heatsinks. 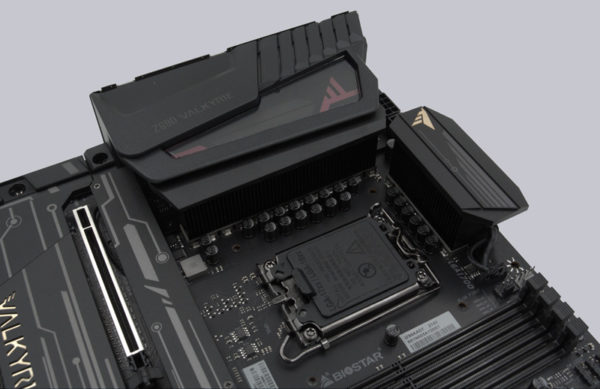 The heat sink is also actively cooled via two small fans. These can of course be temperature-controlled. Nevertheless, they are very useful, because the voltage control (Dr.MOS) is used here with a whole 105A in extreme cases. 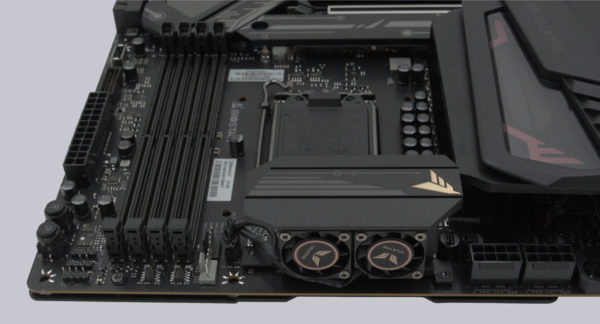 So that the board doesn’t get too warm on the back side, Biostar has equipped the board with a backplate, which not only provides stability, but also evenly dissipates the heat generated on the chipsets. 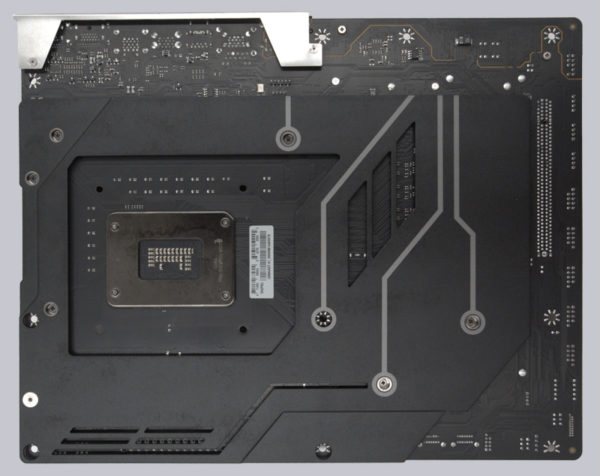 The Z690 Valkyrie does not have to hide in terms of features either. Biostar has given the motherboard many features, including VIVID LED DJ, Touch Button, Dual BIOS, Tweak Tech, Rapid Debug3, BIO-FLASHER, A.I FAN, LED ROCK ZONE, RGB Memory Sync, BIOS EZ Mode /Advanced Mode, Intel Optane Technology and AURORA Utility. The power and reset buttons on the board are also very practical. 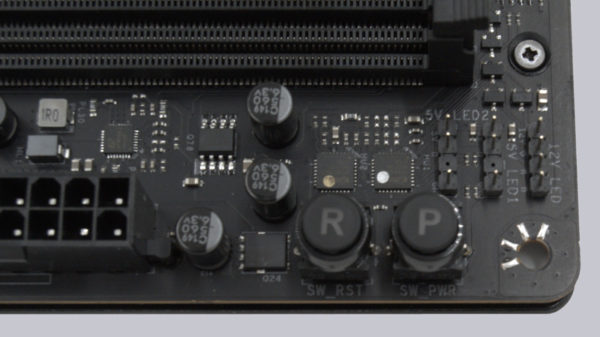 In terms of expansion cards, the Z690 Valkyrie offers three PCIe x16 slots. Two of them are designated as PCIe 5.0 and one as PCIe 4.0. All three slots are robustly designed and reinforced with steel. There shouldn’t be any problems with the spacing here either, for example if the graphics card is more than two slots wide. If you use all three slots, they are electrically operated from top to bottom with 16, 8 and 4x. The usual PCIe 1x slots are not available, since M.2 slots have been installed here. 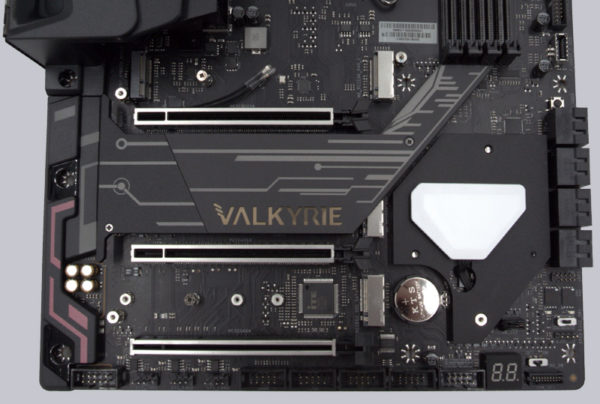 In terms of memory support, we have a total of four slots for DDR5 with dual-channel support. A maximum of 128 GB memory can be installed here, which is supported up to a maximum speed of 6 GHz +. Of course, Intel’s XMP is also supported here, so nothing stands in the way of easily overclocking the working memory. ECC memory is not supported here, by the way. The motherboard only supports 4, 8, 16 and 32 GB UCC modules. 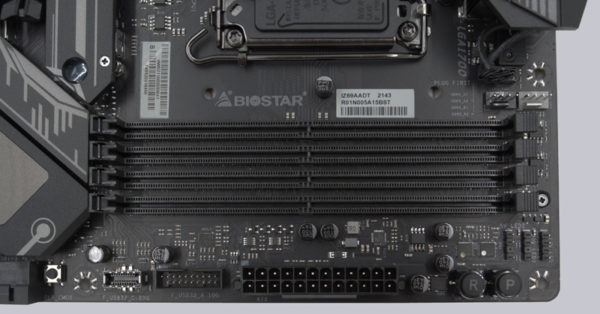 Of course, it is still advisable to look at Biostar’s official memory support list before blindly buying memory that might not run at the desired speed. The list can be found here.

Even though M.2 SSDs are on the rise, sufficient connectivity for conventional hard drives/SSDs is always helpful. The Z690 Valkyrie offers eight SATA 6 interfaces. However, there is a small deduction in the B grade at this point, because only the first four interfaces support RAID 0, RAID 1, RAID 10, so anyone who wants to use more than four storage in RAID will need an additional RAID controller. Intel’s Rapid Storage Technology is supported on all eight SATA connections. 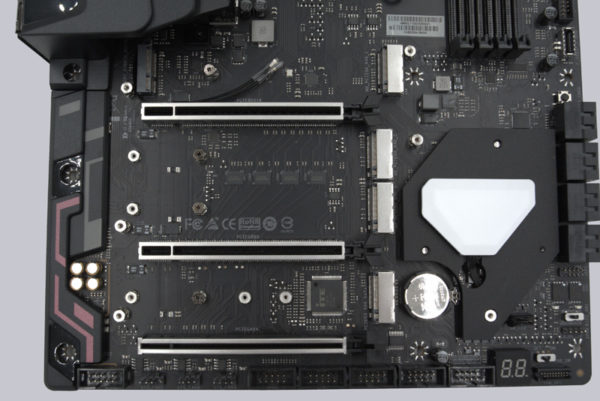 There are two USB 2.0 headers (yellow) on the motherboard, which can elicit a total of four USB 2.0 connections. In addition, there are three USB 3.2 headers, one of which is Type-C. Of course, there is also a Thunderbolt header, which can be found at the bottom left. 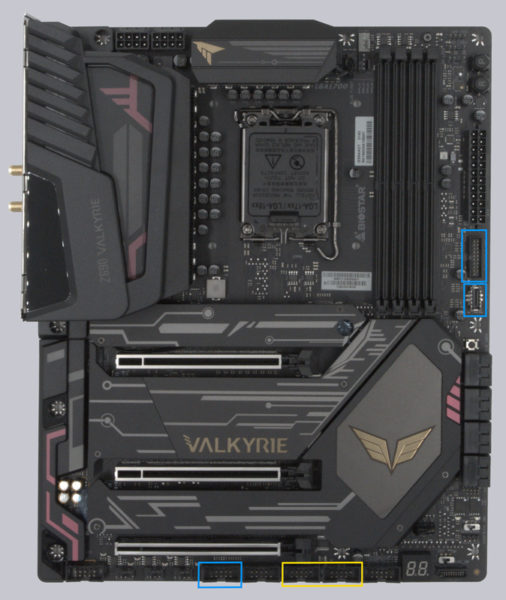 Of course, all connections have ESD protection, which means that they are protected against electrostatic discharge or charging.

Biostar relies on the tried and tested ALC1220 from Realtek for the sound, which offers five audio jacks in 15µ gold design as well as an SPDIF output. In addition, there is overvoltage protection, an isolated shield from the PCB (Hi-Fi Ground) and special Hi-Fi capacitors for a clean sound experience.

Now it’s time to breathe life into the Z690 Valkyrie. For this purpose, we equip it with an Intel i7 12700K processor. 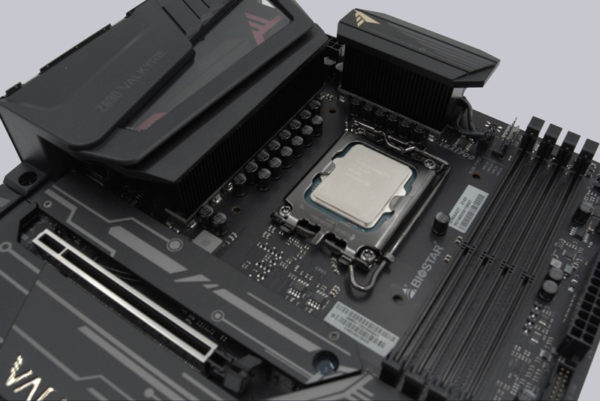 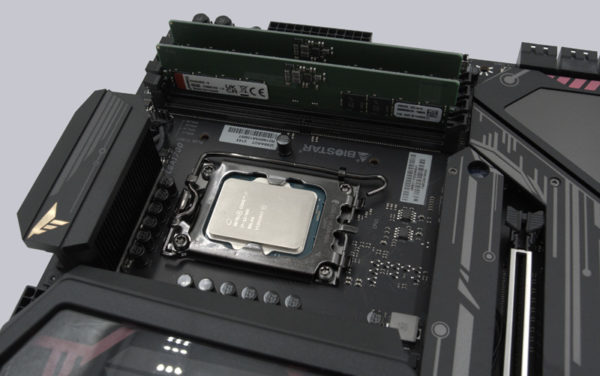 For cooling, we use a custom loop consisting of an Alphacool Eisblock XPX Aurora Pro with 600mm² radiator surface. This should sufficiently cool our Intel Core i7-12700K so that the motherboard can show what it’s made of. By the way, in the big CPU Cooler Comparison Review we have listed a lot of cooler tests. 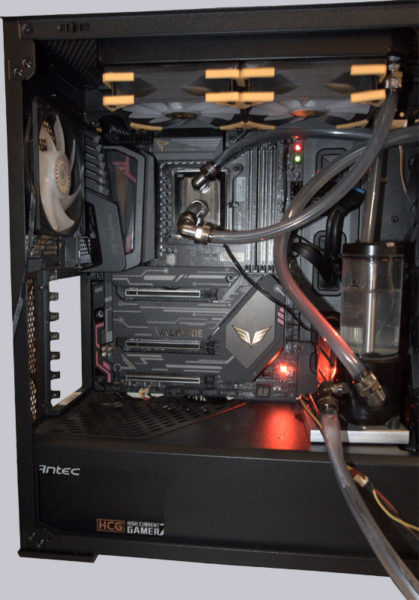 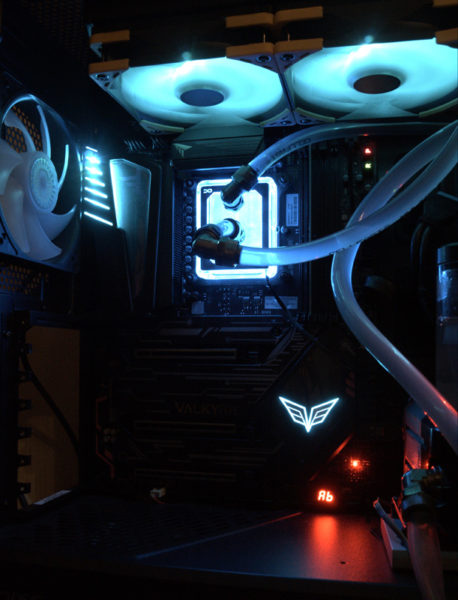 Before we now get to the overclocking, we show a short video of the integrated Biostar Z690 Valkyrie motherboard lighting.

In addition, we still created a small summary on our OCinside YouTube channel in the Biostar Z690 Valkyrie video.

After installing the board in the case, we now come to the Biostar Z690 Valkyrie UEFI and the overclocking options …