We tested the SilverStone PF240-ARGB water cooling on our known test system with AMD Ryzen 5 2600 CPU in factory and overclocked condition. The test system consists of the following components …

To keep the impact of the housing as low as possible, no enclosure side panel was mounted during the tests. The CPU was loaded with the Prime95 program, where we chose the “Small FFT” test for maximum heat development. The temperatures were determined with the program HWiNFO. Here you can find the tools for download.

The system was always loaded until no temperature increase was detected for 5 minutes. The opponents were the AMD Boxed Cooler and a good midrange tower air cooler, the Arctic Freezer 34 eSports. The pump of the SilverStone PF240-ARGB always ran at 100%, as SilverStone strongly advises against throttling it, although we will return to the issue of pump throttling later in the review.

The measured values of the CPU that is not overclocked are as follows. Results with a value of “>85°C” mean that the test was aborted early, because the cooling was not sufficient. 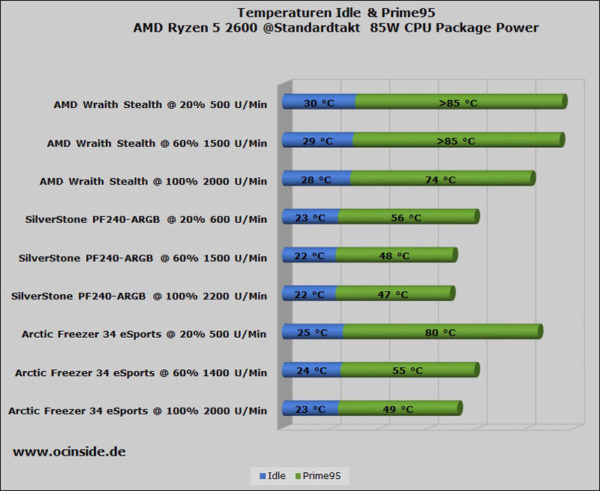 The AMD Boxed cooler must be operated at maximum fan speed even at standard clock speed to cool the CPU sufficiently. The Arctic Tower cooler, on the other hand, provides sufficient cooling performance from medium speed. For the PF240 AIO, AMD’s 6-core cooler does not present a particular challenge at standard clock speeds. Even at minimum and whisper quiet fan speed of 600 rpm the CPU core temperature reaches only 56°C. Thus, we look with optimism at the values of the overclocked CPU, where significantly more heat must be dissipated via the cooler. Such a high overclocking was not possible with the AMD Boxed cooler, which is why no values are listed for it in the following table. 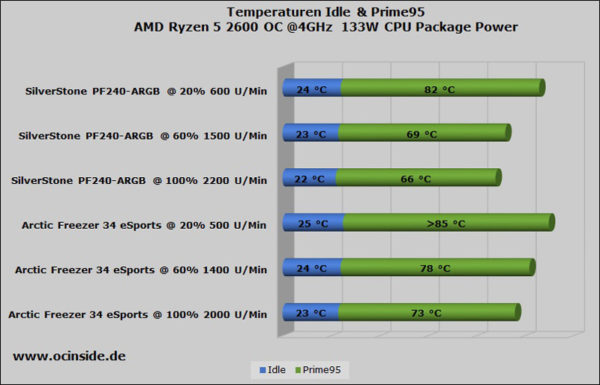 Even at only 20% fan speed, SilverStone’s water cooler still manages to cool the overclocked CPU sufficiently. At a still relatively bearable speed of 1500 rpm, the AIO undercuts the tower cooler by 4°C. Noise-insensitive tempers can reduce the temperature by another 3°C at maximum fan speed, allowing the PF240-ARGB to achieve top cooling performance among 240mm AIOs! But with 2200 rpm fan speed at 54dBA at a distance of 30cm, it also breaks records for volume.

In terms of cooling performance, SilverStone’s 240mm AIO convinced us completely, but in the test, the pump stood out with clear buzzing noises on the one hand and the high speed fans aren’t exactly Silent-PC compatible on the other hand. Fortunately, we were spared at least from gurgling noises during the entire test phase. If you need maximum cooling performance, you have to be prepared for stormy conditions in the PC and preferably wear headphones against the noise.

The cooling capacity is only marginally reduced at 60% fan speed, but the noise level is reduced to at least tolerable 44dBA at a distance of 30cm.

However, at this speed the fans tend to chirp occasionally, which isn’t very loud, but can still be perceived as annoying. The fans only run really quietly at 50% speed or less, where the cooling capacity gradually decreases more and more. Those who set their fan control to 40% will get whisper quiet fans and still good cooling.

Concerning the pump, SilverStone clearly states on the website that it will not throttle it, but this did not stop us from trying it. We didn’t encounter any problems in our tests, even at a pump speed of only 40%, and only at over 70% pump power did the pump make itself felt acoustically. So there is enough leeway to find the optimum of performance and volume for your own application.

Now that we have taken a closer look at the thermal and acoustic performance, we don’t want to ignore the visual effects of SilverStone AIO water cooling. 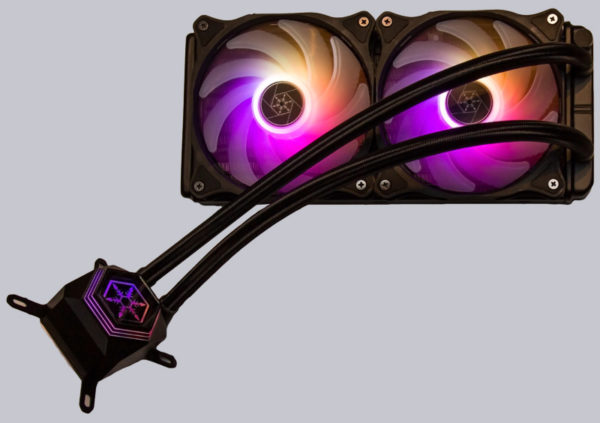 In the following video in our OCinside YouTube channel we present the effects that the included aRGB controller has to offer.