Before and after the application with liquid metal we tested the performance of the laptop with practical and purely synthetic benchmarks tools. Of course, we don’t want to withhold the results.

The laptop modified here isn’t the youngest anymore, but the old thermal compound was still fully functional and the Intel Core i7-2670QM Quad-Core CPU installed performs the following clock rates according to the data sheet.

As a practical benchmark we use Cinebench R15 and as an absolute extreme test Prime95, which generates a load that doesn’t actually occur in normal use, but shows us the real performance of liquid metal relentlessly.

Before the application with liquid metal, the CPU reached the maximum core temperature of 100°C under load after less than 1 minute on turbo clock and then only clocked at 2.2GHz and kept this clock just below the temperature limit. By default, the laptop is configured by the manufacturer for 45W continuous load and 65W short-term peak load. With these performance values, the CPU, as already mentioned, ran so hot after a few seconds that the thermal protection function had to reduce the clock frequency to the standard clock.

This resulted in 407 performance points before the liquid metal modification with conventional heat conducting paste in Cinebench R15. 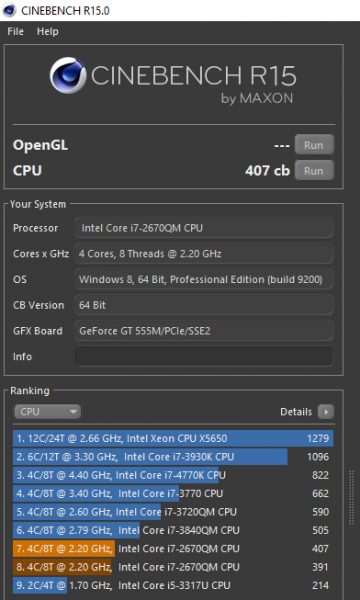 After using the liquid metal, the full all-core turbo clock rate of 2.8GHz could now be maintained after any number of runs of the benchmark without a break in between. With a Long Term Power Target of 52W. The Short Term Power Target has also been adjusted to 52W.

As a result, we now received 478 points in the Cinebench R15, which corresponds to a performance increase of more than 17% and an equally reduced computing time. 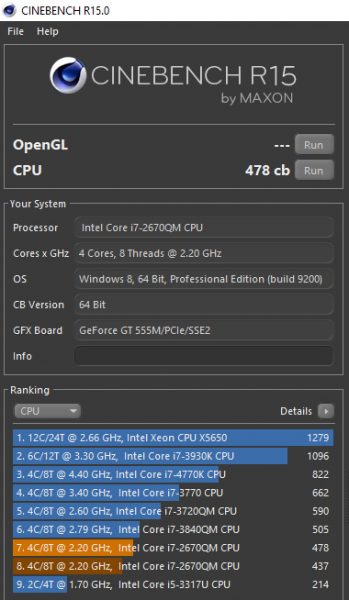 Even more impressive is the fact that the CPU core temperature never rose above 72°C, which is really remarkable. The fact that the idle temperature also dropped by 5°C is of course something we also like to take with us. Under office working conditions, the Intel Core i7-2670QM processor now settled in at 45°C. The Intel Core i7-2670QM processor is now at a comfortable 45°C.

But what does the whole thing look like under maximum processor load?

We examined this scenario with the synthetic stress test program Prime95.

In order for Prime95 to run permanently at 2.8GHz on all cores, the Long Term Power Target had to be increased to 62W with the help of the Intel Extreme Tuning Utility. With this measure, Prime95 actually ran 10 minutes without any problems permanently at 2.8GHz. However, the core temperature rose to an impressive 90°C, which is why we stopped the test after 10 minutes. By default, the laptop is designed for a continuous load of only 45W and under normal conditions such a high processor load is not reached.

In summary, we present the measured temperatures again in a diagram. 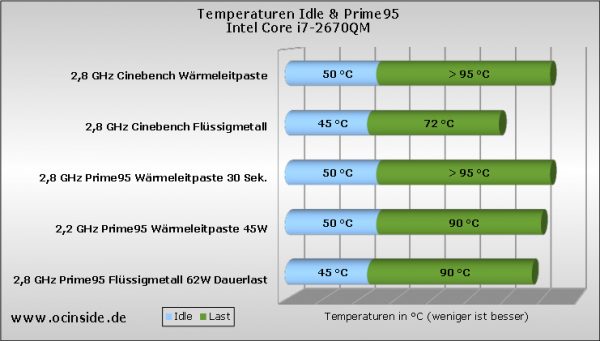