After first power on over the power button or over the provided remote control, the ASRock AMCP7AION-HT motherboard shows the BIOS post, but nothing more. 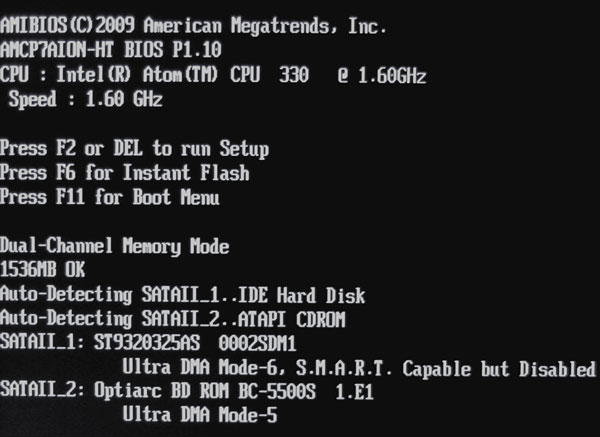 On Hardwarespot.de we reported recently about the ASRock ION330HT-BD Version with Microsoft Windows7 and thus it should be clear that there is no Windows 7 pre-installed on the HTPC. However it is very unfortunate for the layman that ASRock neither installed a pre-configured Linux system, nor delivered any media player software on DVD. This would be realizable relatively inexpensive with a Live DVD or CD, and a preinstallation should be also possible for ASRock without much problems or costs. Of course, such a pre-installed or Live system cannot be 100 percent up-to-date and not everyone would like to use this Mini ITX system as HTPC. However it is an easy way to offer users the entrance into the world of Home Theater PC systems and saves a lot of time for the buyer.

But new Linux or media player users do not need to give up hope. Because, for this reason, different operating systems with media player software were installed in the practice test for several weeks on the ASRock ION330 HT BD and published as separate guides. It depends on you, if you install this HTPC software from the guide on a self-made HTPC, or on that ASRock ION330HT. Without telling too much, the installation of an infrared remote controller in Linux or the setup of a WiFi connection in Linux without graphic user interface is not simple always and for this reason there is additional help.