Although the ASRock ION330HT-BD was delivered without an operating system, the performance is very important on a system with integrated CPU and GPU.

To measure the performance, a Microsoft Windows 7 with all current drivers was installed within a few minutes and for benchmark, the Futuremark 3DMark Vantage software was installed to the Windows 7 Ultimate. 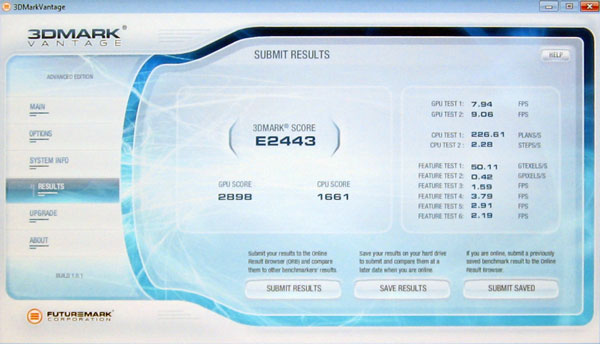 The current consumption of the system was very low, in spite of the high performance. In the power off condition approx. 0-1 Watts were necessary, because the system comes without power switch. For the standby mode approx. 1-3 Watts were necessary. In Idle the system used approx. 17 Watts. During full load in the test a maximum of 28 Watts were used and that is clearly below an AMD 7xx PC system with a current Phenom II CPU.