Without having to loosen screws, you can also open the perfectly painted sheet metal side panel up to 90°. Behind it are the combined RGB and fan controller, which unfortunately does not support addressable LEDs, as well as a holder for a 2.5″ drive and a large cover plate behind which you can stow the cables so that they don’t press on the side cover later. 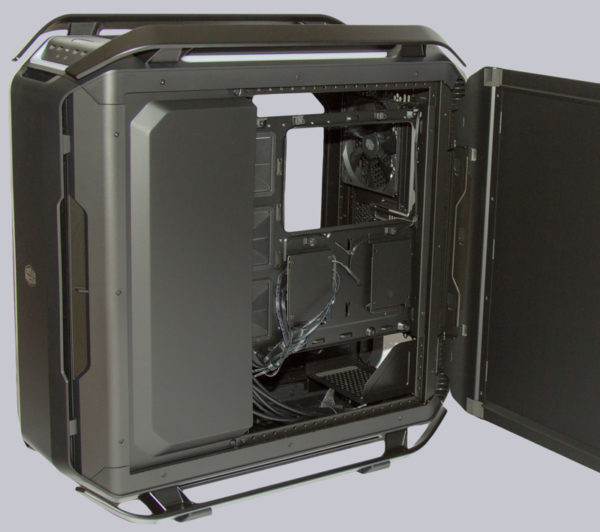 Here is a look behind the cable cover and at the exposed RGB/fan controller. The 3 large, rectangular cable outlets in the mainboard carrier plate are provided with gap-free slotted, very soft rubber grommets. In addition, the connection cables for the control elements of the case can be seen. If you have a mainboard with only one USB 3.0 port, you can also connect the second USB 3.0 plug to a USB 2.0 header on the mainboard using a cheap adapter cable. For the front USB Type-C connector you need a motherboard with an internal USB 3.1 header. The ventilation grille integrated in the bottom can be easily seen from here. 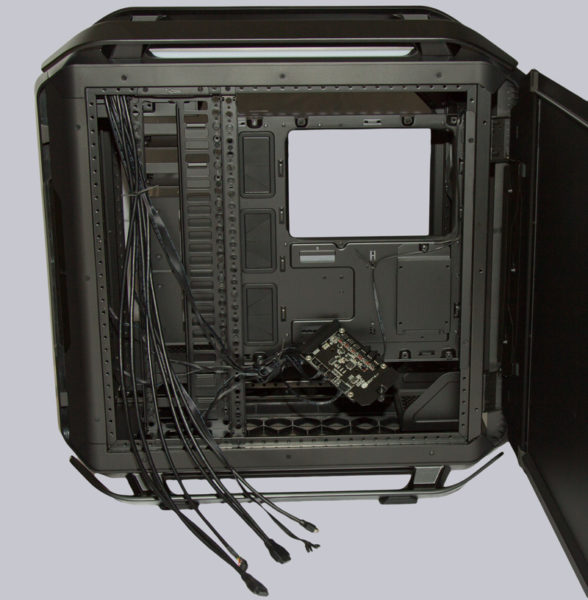 When we look into the main chamber of the Cosmos C700P Black Edition, we see below a continuous but removable power supply cover with many ventilation holes, which keeps a distance of 58mm to the front fan frame. This offers enough space for really thick radiators. A holder for a 2.5″ drive is already mounted on the power supply cover. 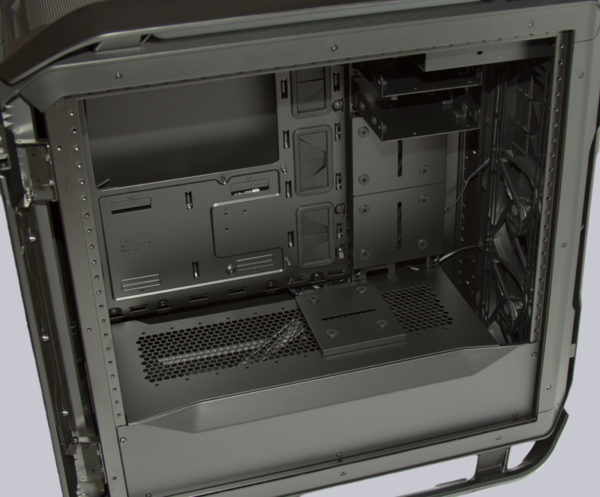 On the right there is a vertical HDD carrier strip, where two holders for 2.5″/3.5″ drives and two holders for 2.5″ drives are already mounted. If you want to take it to the top, you can install up to twelve 3.5″ hard drives plus a few more 2.5″ SSDs/HDDs. The single bay for an optical 5.25″ drive can be removed at will or replaced by the included holder set for two 5.25″ drives. Depending on the drive configuration, a correspondingly large or slightly smaller radiator can then be installed at the top or front. However, a radiator up to 360mm in size can always be mounted. Only if you want to install a 420mm radiator you have to make compromises. The mainboard carrier board accommodates motherboards from the small M-ITX format up to the large E-ATX format. Looking back, we still see the pre-assembled 140mm fan, which like the other fans is also not RGB illuminated and does not allow PWM control. 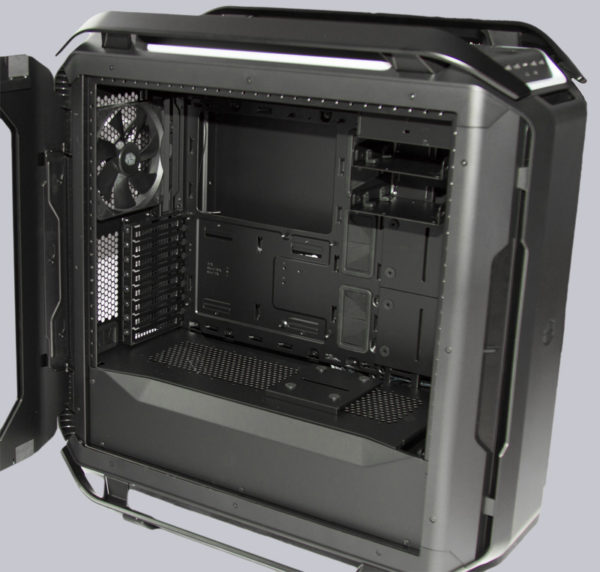 The attentive reader may have already noticed that the 2.5″ drive carriers have rubber elements. Included in the delivery are knurled studs, which are screwed into the threads of the drive and then you insert the 2.5″ drive into the retaining rubbers. 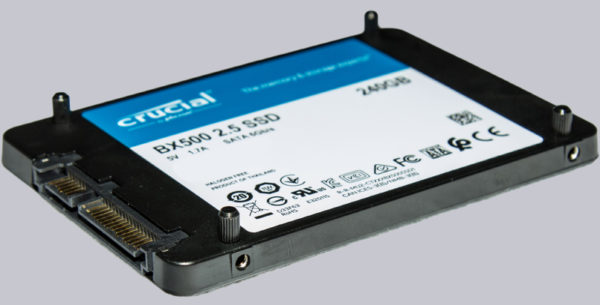 This is useful when using HDDs to reduce vibrations caused by unbalance of the rotating magnetic disks, but on the other hand the drives are not 100% secure, which can be a problem when transporting a complete system, as the drive can fall out. The situation is different if you put a 2.5″ drive in the 3.5″ bracket. There it can be screwed together. This looks as follows, whereby the damping rubbers intended for 3.5″ drives at the bottom of the drive bay must be removed beforehand. 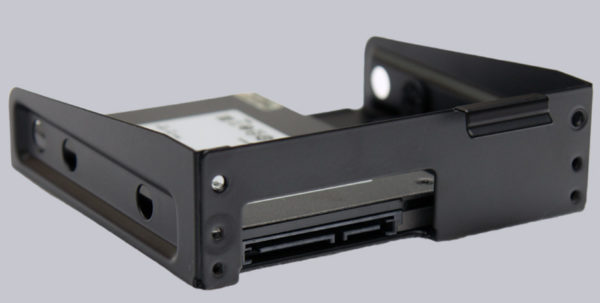 If you put a 3.5″ HDD in the holder, the rubbers can remain mounted and also the lateral fixing screws are rubber-mounted. 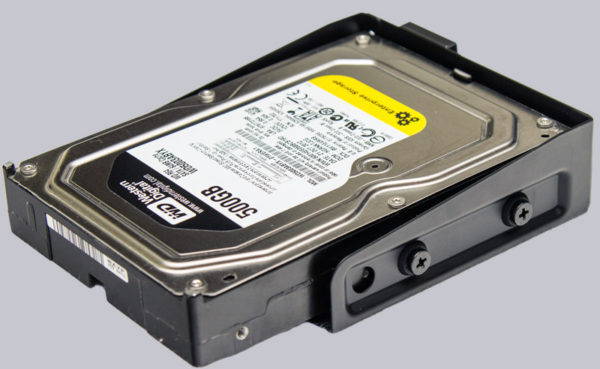 The following picture shows an example of a case equipped with an M-ATX motherboard, a 2.5″ SSD and a Cooler Master ML240P Mirage AIO water cooler with a radiator mounted on the upper fan frame. Here you can find the review of the Cooler Master MasterLiquid ML240P Mirage Water cooling with addressable RGB illumination. 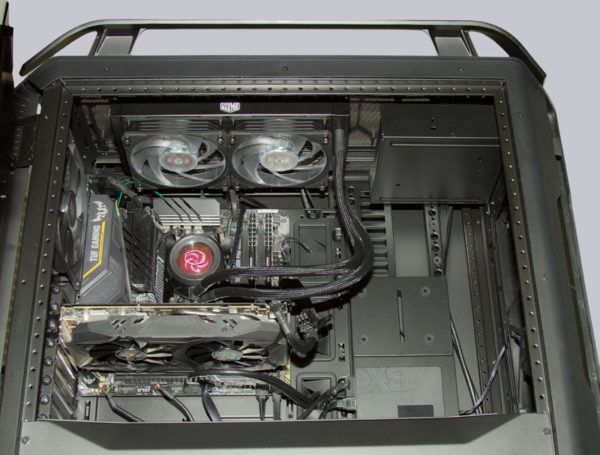 And even the 38mm thick radiator of the Arctic Liquid Freezer II 280 AIO did not cause any problems for this Cooler Master Cosmos C700P Black Edition Full-Tower case in contrast to the Thermaltake Versa H26TG case from the AIO test. 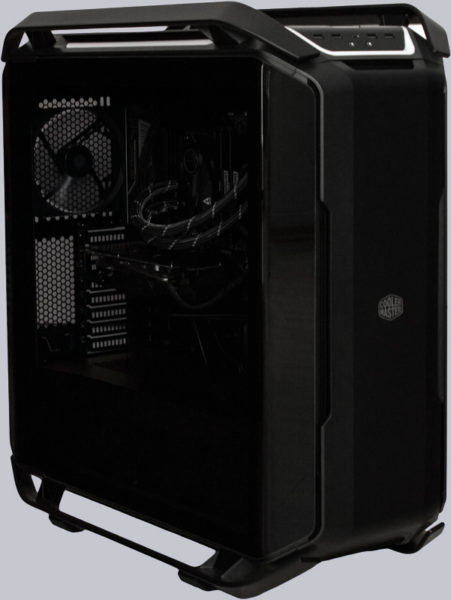