In order to get the best possible impression of the performance of both contenders, we have included various benchmarks in our course (Benchmark Download). We have listed them here:

The first round in Cinebench R23 immediately delivers impressive scores. Of course, the i9 with 2 cores more can achieve the higher multicore score, but the singlecore score is also a bit higher thanks to its higher boost clock. 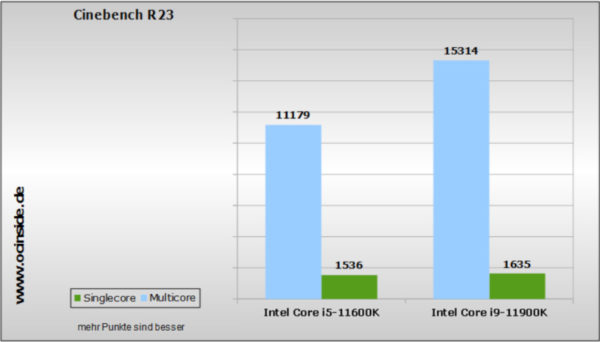 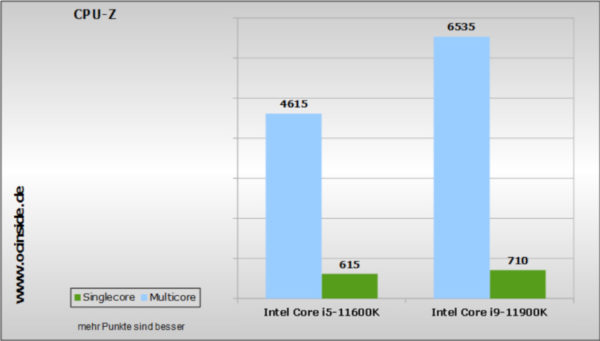 … However, if you compare it with the Xeon W-1290 or an AMD Ryzen 3700X, you can see that Intel always manages to increase the performance per MHz with every generation and even the i5-11600K has a slightly higher single-core performance than the Xeon W-1290, which corresponds to Intel’s 10th consumer generation in its architecture. 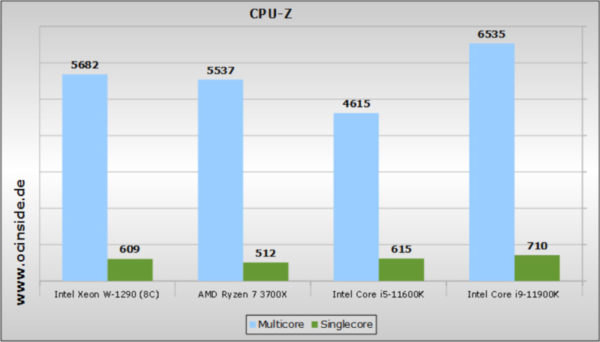 With AVX2 instruction set, this result continues and the 11th generation again shows a significant leap in performance. 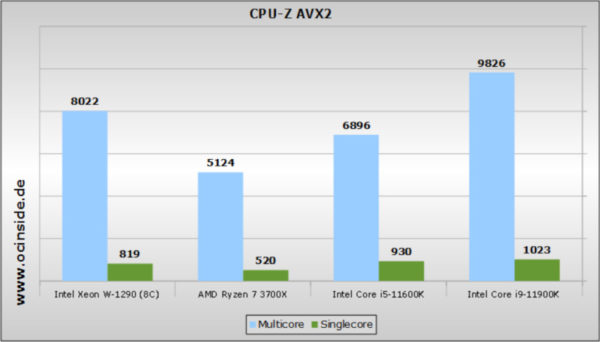 Another new feature of Rocket Lake is the support of AVX 512, which we also measured. 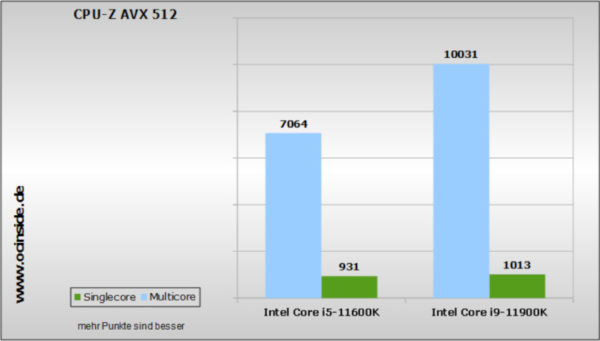 Since AVX 512 was reserved for the consumer market, we can only use the data of an Intel Core i9-7900X Skylake-X @ 4.5 GHz for comparison due to the lack of a large selection. However, it is nice to see the leap in performance over 5 generations and the older 10 core from the HEDT segment only just manages to hold its own in the multi-core value with its 2 more cores. Unfortunately, the Xeon W-1290 does not yet support AVX 512. 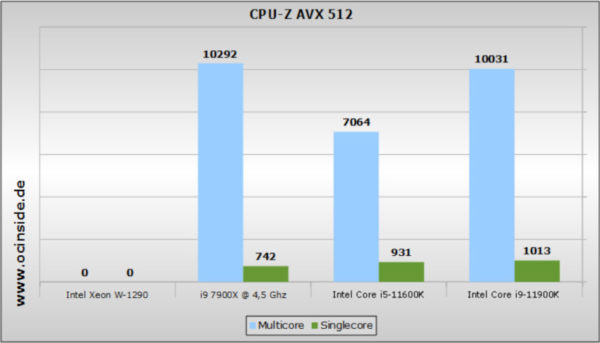 Next, let’s take a look at AIDA64 (AIDA64 Download). Here, all processors are close to each other, apart from the i5 with only 6 cores. 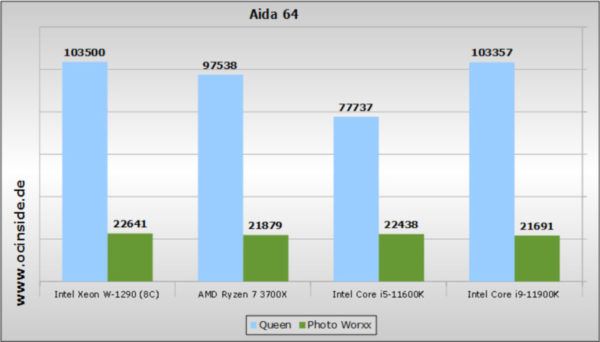 The encryption instructions of the CPUs show a very surprising gain for the first time in Intel’s 11th CPU generation and the values literally shoot through the roof compared to the Xeon W-1290 or the Ryzen 7 3700X. 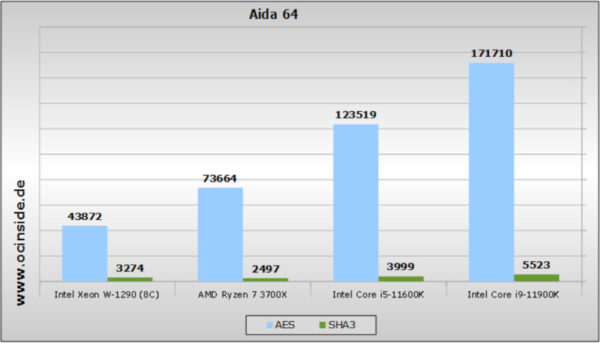 Before we get to the gaming benchmarks, let’s take a last look at PCMark and the graphics-limited Superposition in the 720p setting. Of course, the i9 is slightly ahead of the i5 in PCMark. In Superposition, both CPUs are on par since the integrated graphics unit is the limiting factor here. 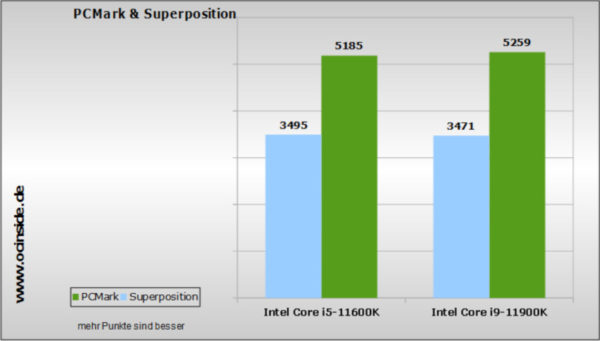 If we take a closer look at the Superposition result, we can see that even in the 720p low setting, playable FPS are just achieved. Intel’s integrated graphics unit is therefore only suitable for the occasional undemanding game in between even in the 11th generation. 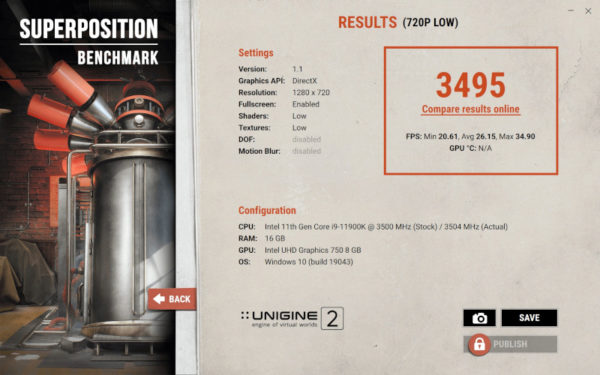 We come to the same conclusion after a run in 3D Mark Firestrike. 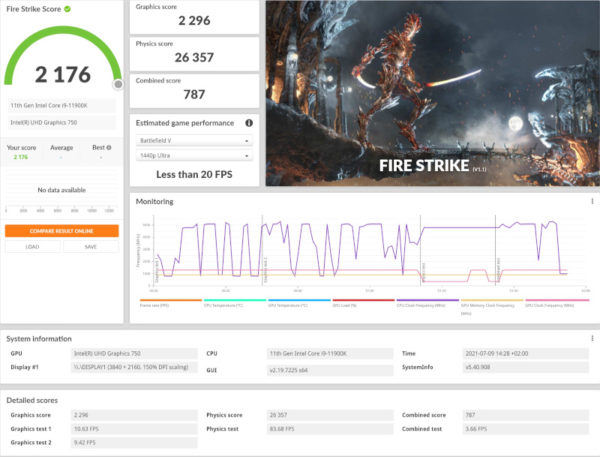 Moving on to the Intel Rocket Lake-S overclocking …