Today at OCinside.de we take a close look at the Intel CPU Heatspreader and clarify whether it is worth the effort to grind and polish the CPU IHS or not. The latest high-tech measuring equipment is used, as it is used in aerospace and Formula 1. First of all, there will be some surprises! The following workshop will show you exactly which ones.

Many thanks for the support to Daniel.

Here you can buy processors and thermal paste at a reasonable price.

Here at OCinside.de a lot focuses on overclocking. Overclocking a CPU generates a lot of heat, which has to be dissipated from the CPU by appropriate cooling to avoid overheating. If you want to use overclocking to its limits, you also have to optimize the cooling as much as possible. Recently we described in our Liquid Metal Tutorial how the heat dissipation from the CPU-DIE can be significantly improved. 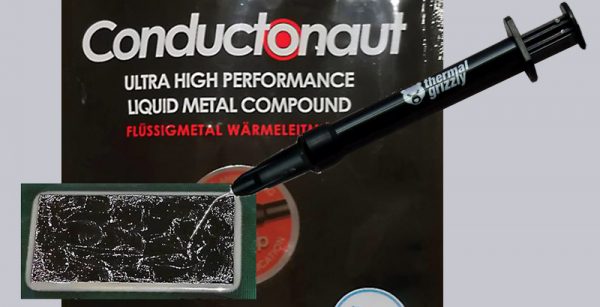 This liquid metal tuning offers additional space to further increase the CPU voltage (VCore) and thus to increase the clock frequency even higher. But the interface shown in our liquid metal application tutorial is located inside the CPU of desktop CPUs and is not the only place where heat dissipation can be hindered by manufacturing inaccuracies.

The next interface in the chain of heat dissipation away from the CPU core is the contact point between the CPU lid or heat spreader (IHS) and the CPU cooler. The greater the effective contact area between IHS and the cooler, the better the heat transfer. The following figure shows the schematic cross-section of a CPU and the path of heat from the source to the cooler. 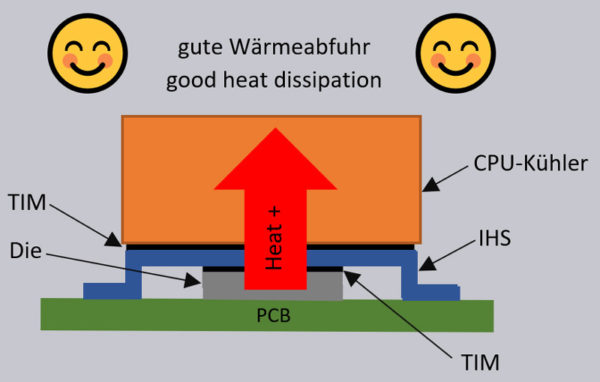 Cavities due to unevenness and the surface roughness of the respective contact surfaces reduce heat transfer. 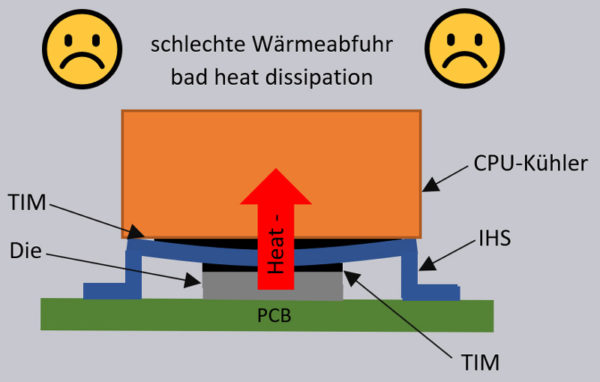 This is also the reason why heat conducting paste is used, because it conducts heat many times better than the air otherwise trapped in the cavities. In the following we list the thermal conductivities of the most important substances that affect the cooling of a CPU.

The thermal conductivities of different materials …