If you determine the maximum CPU multiplier, the maximum BCLK and the maximum memory speed, you can try now to allow similar high values with energy-saving settings. Power consumption and heat generation can be reduced particularly during idle periods, where the processor is less used or is not used (idle). May be by manual adjustment of the P-States, overclocking using Turbo Core instead of all cores or with the use of Core C6/C7 Mode, Speedstep, etc..

If the CPU does not have the overclocked frequency in Windows, it may be due to a Windows setting or more specifically to the Windows power options. While the frequency is displayed already correctly in the UEFI, but in Windows, CPU-Z shows a lower CPU clock. This is because that Turbo only increases the CPU clock, when the CPU has load.

But you can set the maximum CPU clock also permanently. Usually, the Turbo CPU clock increases only when the CPU load rises. Unless we set the CPU clock in the Windows power-saving settings explicitly to the CPU maximum, to obtain the highest CPU clock permanently. This is done by putting the power plan to high performance over Start -> Control Panel -> Power Options Properties. Or you change the current power plan in the advanced power options with administrator rights over Power Options -> Advanced settings -> Processor power management -> Minimum processor state to 100%, so that the maximum and minimum is set to 100%. 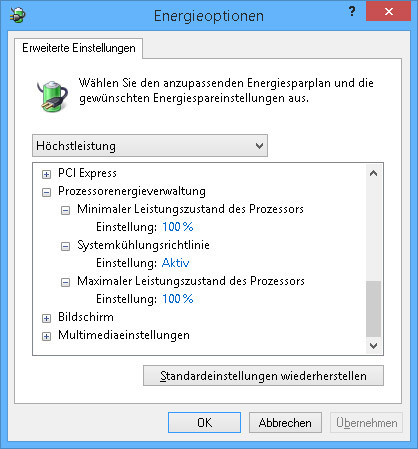 You could disable the C-State functions fully in the UEFI BIOS when you set Advanced -> CPU configuration -> CPU C States support from Auto to disabled, which disables all CPU C-States, but you should disable it only for test purposes or for the OC beginning. Why should overclockers unnecessarily cause an increase in your electricity bill, if we just do not need the maximum CPU performance ? Not to mention of the higher heat dissipation, which must be led away by better heatsink and/or by a higher fan speed.