This point is kept slightly more detailed, because it is extremely important to keep the correct temperature values. To do this, you should know first some background information.

It is also advisable to monitor the temperatures of the components during overclocking. With SpeedFan, motherboard monitor or Core Temp it is possible, to output the CPU temperature in the task tray (next to the Windows clock) at any time and optionally send an alert on high temperature values. Any kind of overclocking produces unfortunately more heat and you should necessarily counteract with appropriate cooling, to prevent destroying the CPU, motherboard, graphics card, or any overclocked components!

According to the Intel Haswell processor datasheet, E.g. a 22nm 4th Gen Intel Core i5-4690 K CPU not exceed 72.72°C Tcase, a 14nm 5th Gen Broadwell Intel Core i7-5775 C CPU however, should not exceed 71,25°C. Sounds not a lot, but results in the TTV (thermal test vehicle) measuring at least a difference by 84W TTV power at 72.72°C of the 22nm CPU to 65W TTV power at 71.25°C of the 14nm CPU, which is also important for the TDP (thermal design power). However, for mobile processors, Intel indicates the maximum temperature value with Tjunction Max, because mobile processors have no IHS where the Tcase temperature could be measured. Sure, some enthusiasts may think now, that according to the CPU Delidding (remove IHS to reduce the temperature), we also have no more heat spreader on the CPU, but probably Intel didn’t think about this 😉

Further details about TCC, PROCHOT and THERMTRIP …
To go a little deeper into the details, we want to explain something about the thermal protection capabilities of the CPU here on OCinside.de. When the maximum value of the so-called PROCHOT register is reached, the TCC (thermal control circuit) cyclically switches the CPU down and when the CPU reach the maximum THERMTRIP register value, the CPU protection is switched off completely. The values are counted incidentally against 0, so that a defective sensor could not cause the worst case such as a defective CPU or even a fire. Because the values are adjusted even slightly depending on the motherboard and software and there are also tolerance values (E.g. +5°C core offset), all temperature data can be enjoyed with caution.

Even briefer said: The lower, the better !

Even if the CPU is downclocking using the CPU Thermal Throttle option or TTC at about 76-77° C to protect the processor, it is highly advisable to monitor the temperatures for overclocking over a longer period, to ensure a good air ventilation inside of the case, to use a suitable CPU cooler with a drop of high-quality thermal compound and to adjust the CPU cooler fan speed on maximum power, E.g. “Full On” at the first overclocking attempts. On some motherboards you can find a fan controller in the hardware monitor menu and some motherboards also offers a software solution. This is how extensive you can regulate the fan speed depending on the temperature with the ASRock Z97X Killer Fatal1ty. 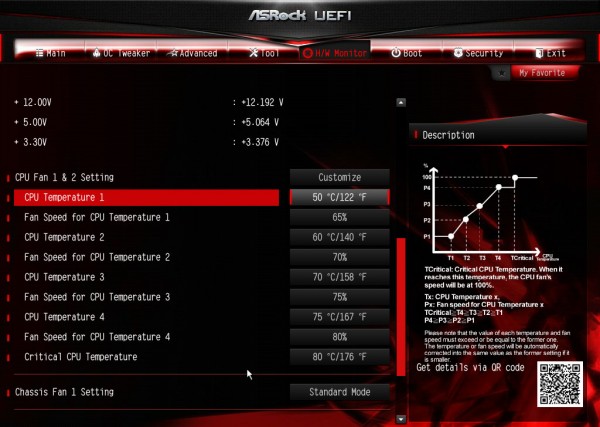 For easy comparison of the cooler, here is a cooler comparison with some Intel LGA 1150 cooler reviews and cooling recommendation, each with the option to listen to the cooler sound, to avoid a heart attack after the purchase. Who like to build the PC with a nearly-silent water cooler, or who like to do extreme overclocking with a compressor cooler, should lool around a bit in our hardware test area, where we tested also water cooler and compressor coolers in addition to the conventional air coolers.

As mentioned earlier, one should not only watch the CPU temperature, but also the temperatures of the other components. Depending on the motherboard, there are different measuring points, as can be seen E.g. very nice here at this ASRock Z97 OC Formula High-End OC motherboard. 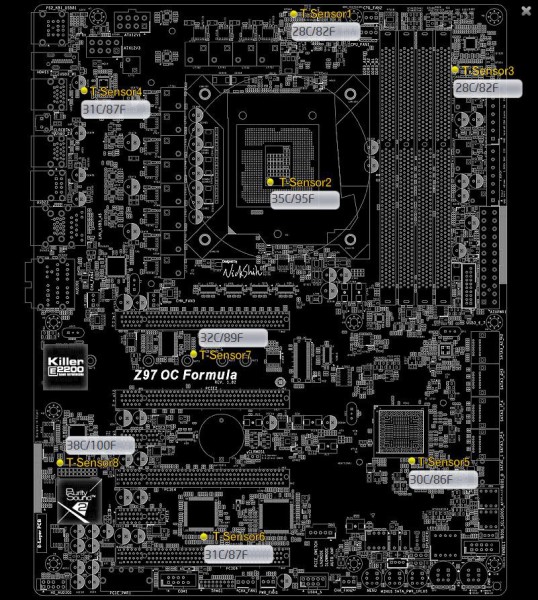