For the review of the Liquid Freezer II 280 A-RGB, we use our AMD test system, which consists of the following components: 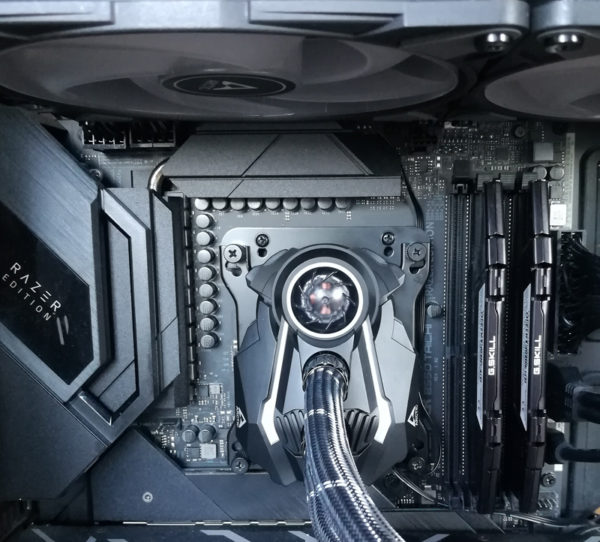 In order to keep the case’s influence as low as possible, no side panel of the case was mounted during the tests. The CPU was stressed with the programs Prime95 and Cinebench R23. The temperatures were determined with the program HWiNFO, where we used the value “Tdie”. The power consumption always refers to the total power consumption of the CPU, i.e. the CPU Package Power. By the way, the tools are available on our OC Software Download page.

The system was always loaded until no temperature increase could be detected for 5 minutes. The pump of the Liquid Freezer II 280 A-RGB always ran at 100%, since it does not make any audible noise even at 100% speed as soon as even the slightest ambient noise is present. Thus, only the fan speed was varied. The ambient temperature was around 23°C during the tests.

As expected, the Ryzen 5600X CPU manufactured in the 7nm process does not really pose a challenge for the cooler without overclocking. You can turn down the fans to the lower control limit of the motherboard and still have more than enough cooling power available. This qualifies the Liquid Freezer II 280 as a perfect silent cooler. The pump and VRM fans are not audible from the outside of a closed PC case and the fans only produce a very barely audible, subtle noise at 20% or about 700 rpm. 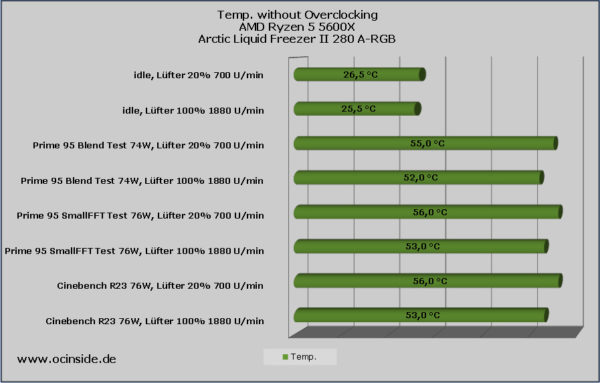 We enable PBO in the motherboard’s BIOS to increase performance. This results in 200-500 MHz higher CPU clock frequency under load, which results in increased power consumption. In our case, the peak power increases from 76W to 117W. The temperature is known to rise extremely during the Prime 95 SmallFFT test, but such loads are not reached under normal conditions. The Cinebench R23 test rather still reflects a practical, compute-intensive application. The Liquid Freezer II 280 A-RGB again masters this challenge brilliantly, as our following chart shows. 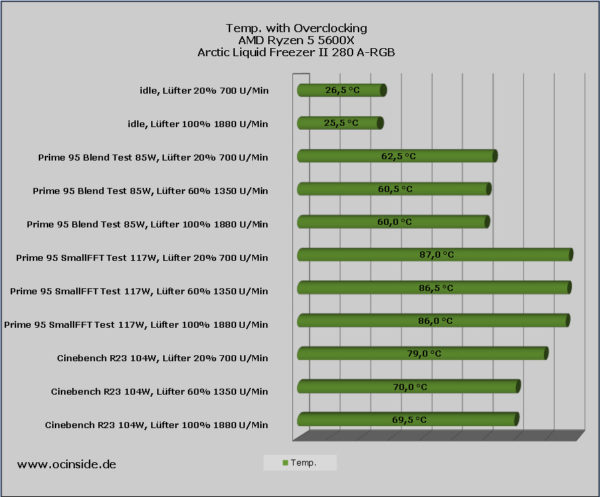 When gaming, the CPU temperature did not reach over 60°C with a volume-optimized speed curve. In summary, the Liquid Freezer II 280 provides more than enough cooling for a mid-range CPU and is rather intended for high-performance processors. If you forgo overclocking, you will be rewarded with a barely audible soundscape.

The VRM fan is still part of the Liquid Freezer II water cooler series. It can supply the voltage converters on the motherboard with the necessary air circulation in tight spaces and poor ventilation in the PC case. In most gaming PCs this won’t be necessary, but rather have an additional VRM fan than need it is the motto here. We have already determined the effectiveness of VRM fans on the CPU cooler in another test, which can be read here. If you don’t want to run the fan, you can unplug the connector on the bottom of the cooling block and the fan will stop. However, you don’t have to do that due to the noise level, since the fan isn’t really audible even at a maximum of 3000 rpm.

The maximum noise level of the P14 PWM PST A-RGB fans corresponds to that of the previous P14 PWM fans without illumination. We could determine a maximum of 41dBA when running 2 fans at full speed. The distance of the measurement microphone was an extremely small 30cm. At a distance of 1m, the fans are clearly audible from a PC at full speed, but we don’t find this particularly disturbing. The volume can be classified as low up to 1500 rpm. The last 400 rpm barely increase the cooling performance, but increase the noise considerably. The sweet spot of optimal cooling performance and low noise is 60-75% PWM or 1350 – 1550 rpm.