ASRock presents the W480 Creator in plain black/grey. A stylish LED illumination is omitted here. Nevertheless, the motherboard is manufactured very high quality. It has 60A power chokes, 50A Dr.MOS and Nichicon 12k black caps. In addition, the motherboard is made in 2oz copper and equipped with massive aluminum passive coolers. In addition, there is a 7.1 HD audio Realtek ALC1220 chipset. The power supply of the CPU is well equipped with a 16-phase VRM and 2×8 pin 12 power connector. 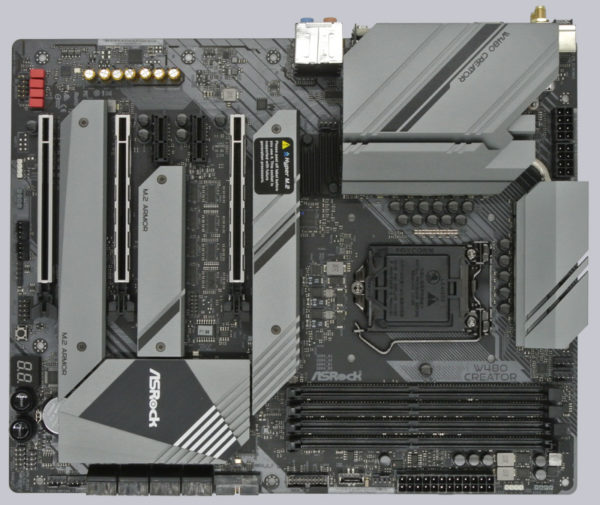 The W480 also scores in terms of M.2 SSD connections. There are 3 connections for M.2 SSDs on the motherboard. All 3 are addressed with PCIe Gen3 x4 (32 Gb/s). The upper two support the form factors M Key 2260/2280 and the lower M Key 2260/2280/22110. It should be noted here that the middle slot can also accommodate SATA3 M.2 SSDs in addition to PCIe. The aluminum heatsinks are all very solid and valuable. 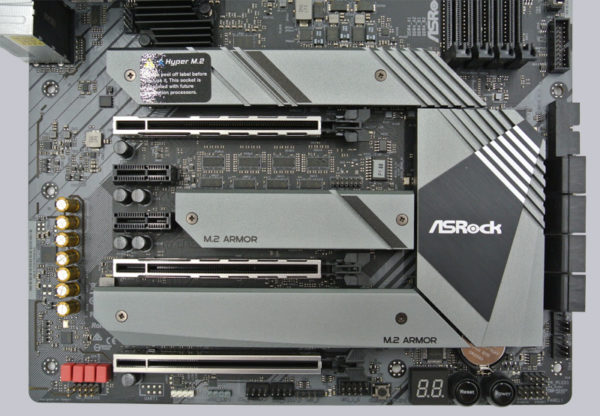 As long as the CPU supports it, the upper slot marked with Hyper M.2 can also address the SSD with PCIe Gen4 x4 and thus 64 Gb/s. However, this is not yet supported by the current CPUs from Intel.

To ensure that the board doesn’t run out of steam, the power supply is of course the be-all and end-all besides the equipment. We can see this well on the picture. The MOSFETS are kept in check under load by the aluminum coolers, which are connected via a heat pipe. In front of them, you can see the Nichicon capacitors, which are specified with a lifetime of 12,000 hours at 105°C. 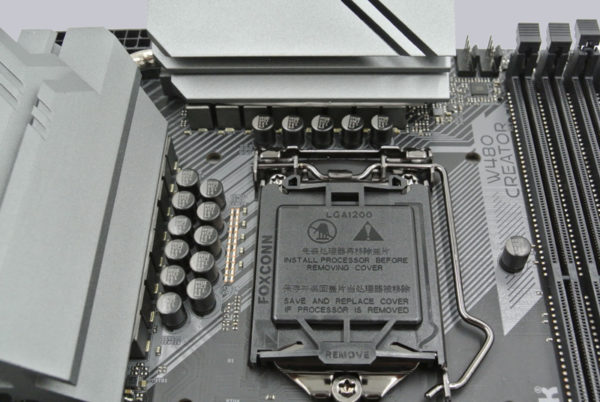 The W480 Creator also offers 16-phase VRM voltage regulation and DR. MOS in 50A version. DR. MOS provides intelligent control on each of the 16 phases compared to normal MOSFETS. This is to improve the performance and voltage supply. 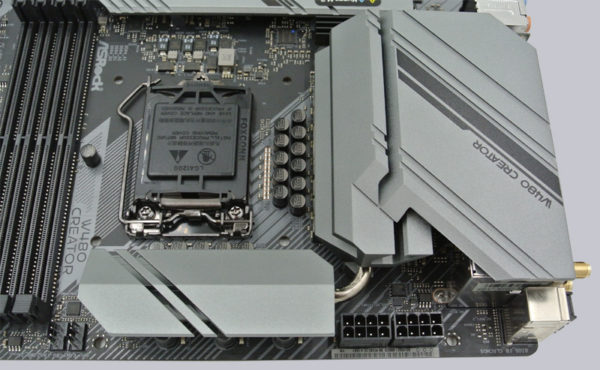 Contrary to the trend, the W480 offers three PCIe 3.0 x16 and additionally two PCIe 1x slots. A special feature here is the PCIe 4.0 support, as long as future processors support it. Due to the arrangement of the slots, it is possible to install 3 graphics cards with a 2.5″ fan design without any problems.

At first glance, there is nothing special to see in the memory support of the ASRock W480 Creator. ASRock offers 4 slots for DDR4 memory on the motherboard with a maximum support for 128 GB of working memory in dual channel, which you can use depending on the operating system (see list).

The really exciting part starts when you put a Xeon in the motherboard instead of a standard Intel Core processor. The W480 Creator offers ECC memory support in contrast to the Z490 chipset, and memory speeds from 2133 Mhz up to 4600 Mhz (or more) are also supported. Besides the now normal XMP support, XMP 2.0 is also supported.

Of course, it’s still a good idea to check ASRock’s official memory support list before you blindly buy memory and then can’t get it to run at the speed you want. The list can be found here at ASRock.

Since this motherboard is not a classic gaming board, we will now take a closer look at what the W480 has to offer in terms of storage media connection.

As you can see on the picture, ASRock provides the motherboard with eight SATA3 ports. All eight support NCQ, AHCI and hotplug. Since the W480 chipset only supports six SATA3 ports out of the box, ASRock has implemented the remaining two via an ASMedia ASM1061 controller. However, this has a serious disadvantage, the RAID functionality is only given for six of the eight ports.

RAID 0, RAID 1, RAID 5, RAID 10 and Intel Rapid Storage Technology 17 are supported here. It should also be noted that if you have configured a RAID, you should have the appropriate drivers at hand during the Windows installation. For Windows 10, you can find them in the UEFI under “Easy RAID Installer”, as usual for ASRock, or of course on the manufacturer website for download.

Besides the SATA connections, the motherboard also offers three M.2 interfaces for M-Key SSDs. It should be mentioned that two of the three slots also support SATA M.2 SSDs.

ASRock has not skimped on the USB connections either. The W480 Creator has eight USB 3.2 (4x Gen1 and 4x Gen2) connections on the ATX panel …

… two USB 2.0, two USB 3.2 (Gen1) and a USB Type C 3.2 header are also on the board. We have highlighted these accordingly for you. By the way, the yellow marked port is the USB Type C port. 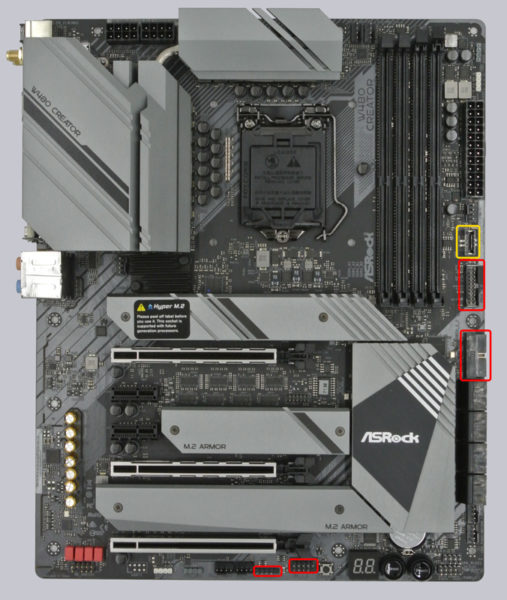 By the way, all connections have ESD protection, which means that they are protected against electrostatic discharge and charging.

You can distinguish the 2 network cards simply by the color of the connector. The “slower” Intel network card is blue, the faster AQUANTIA is red.

Both cards are equipped with Wake-On-Lan, ESD protection and PXE support. The Intel I225LM also has the Energy Efficient Ethernet 802.3az feature. This reduces the network card’s energy consumption, as long as no or only little data is transferred. In our test, both ran without problems with 1000 Mbit on various routers and switches. Unfortunately, we could not test more due to the lack of network technology. But we’ve already tested 10GBASE-T LAN several times like here in the ASRock X99 WS-E/10G review.

ASRock does not have to hide when it comes to the sound of the W480 Creator. The built-in Realtek ALC1220 has a few years under its belt, but it still cuts a very good figure subjectively. Besides 5x 3.5mm jacks, it offers an optical SPDIF digital output.

Those who know the ALC1220 chipset know that it has a SNR (signal-to-noise ratio) of 120db. ASRock has tinkered a bit here and could increase this value to a remarkable 130db. Here the DAC (digital-to-analog converter) SABRE921 from ESS was used.

In our test, the sound card could convince with various speaker systems even without special software. The sound image was very clear and balanced. The digital SPDIF output also convinced with a very clear sound. If you do not absolutely need more sound outputs or sound inputs, you can confidently do without an external sound card here.

There is also an additional power and reset button on the mainboard. To the left, you can also see the debug LED (DR.DEBUG) and the CMOS reset button. 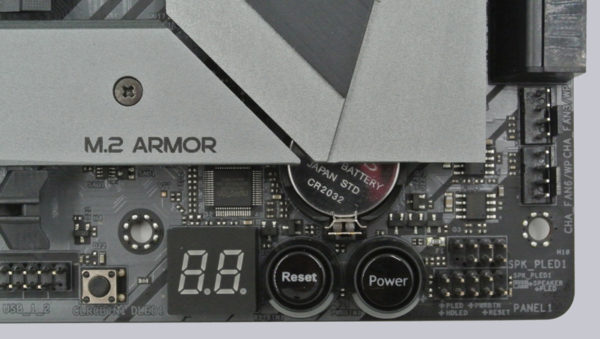 Now we come to the Intel LGA 1200 CPU socket. The new 10th Gen LGA1200 socket looks similar to the LGA1151 and LGA1151 v2 sockets of previous generations, but they are not compatible with each other! So you have to install a new Intel Comet Lake-S processor or similar to work on the Intel W480 motherboard. The socket was provided with a lever, which presses the relatively small CPU evenly on the pins in the socket. As always, do not touch the contacts during installation or even bend the contacts in the socket. When storing or transporting, it is imperative that the protective cap is mounted on the socket. If pins are bent and the mainboard doesn’t work anymore, we help with advices in the Intel Forum. 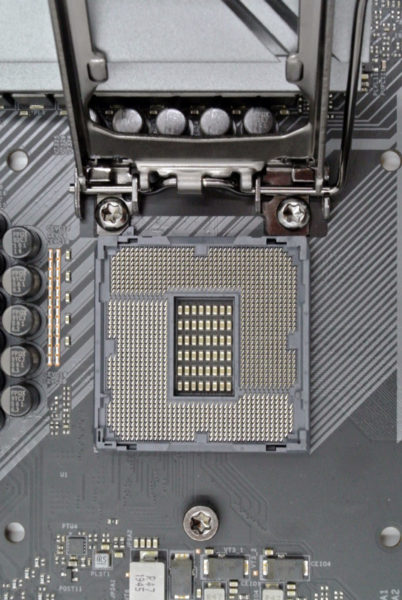 We equipped the test system with an Intel Xeon W-1290. 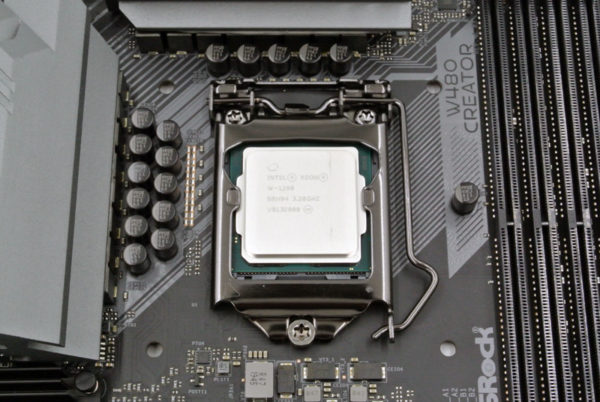 After we have mounted the memory and a cooler, the board can be installed in our case. 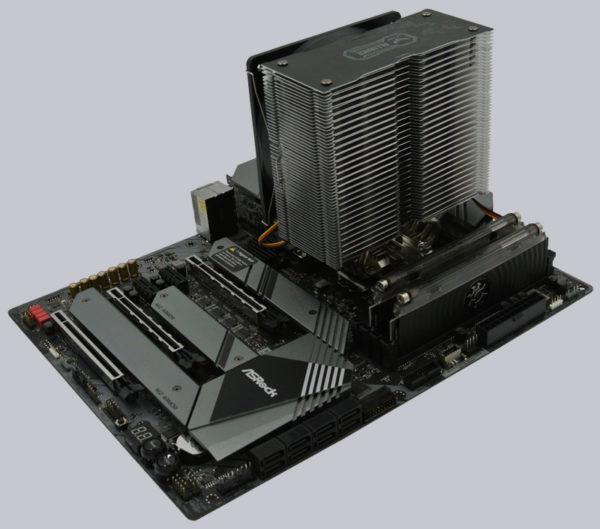 Speaking of memory, we decided to use 2x 8Gb ADATA XPG Spectrix D80. As you can see in the picture above, it is important to put the memory in the respective A1/A2 or B1/B2 slots as described in the manual, so that the motherboard can also address the memory in dual channel. As a cooler, a Scythe Kotetsu Mark II was used. This should have no problems with the Xeon, which is specified with 80 watts TDP.

After we have installed the board in the case, we now come to the UEFI and the overclocking options …