Let’s start with the installation of the NVMe SSD.

After installing in a free M.2 slot, the NVMe SSD is easily recognized in the ASRock Z270 Taichi and the ASRock Z97 Extreme6 test system.

However, to be able to operate a M.2 NVMe PCIe SSD in the Ultra M.2 slot of the ASRock Z97 Extreme6 or other slightly older motherboards, it requires a BIOS update. Then a new NVMe configuration menu is located in the UEFI under Advanced.

The Plextor M8SeGN is shipped with firmware version 1.00. No newer firmware was provided at the date of review at Plextor.

We want to give you a few tips and hints for installing a M.2 PCIe NVMe SSD. Via e-mail and in our Hardware Forum there are frequent requests about slow M.2 SSD speed. A PCIe SSD – both a PCIe plug-in card or a PCIe M.2 modules – requires a high bandwidth for fast performance. If the Plextor M8Se, the Samsung 960 Evo, the Samsung 960 Pro, the Intel SSD 750 PCIe 3.0 x4 SSD or other PCIe SSDs are too slow, liegt es meist daran, it is usually because the wrong slot is selected or the BIOS/UEFI has been set incorrectly.

We like to help you in the PC Forum under the section Hardware or in English – easily create and write a new post, which motherboard and which PCIe M2 SSD is installed. If still no SSD has been purchased, our community also offers a SSD buying advice.

The upcoming PCIe 4.0 standard starts at 1969 MB/s (all ratings are maximum ratings without protocol overhead).

Also very important is the proper NVMe driver for the NVM Express controller. We have installed the Plextor M8SeGN with the latest NVMe driver. Who like to know more about M.2 SATA, M.2 PCIe, 2280, Gen2 x2, etc., should take a look here in the >Plextor M6e review, where we’ve explained all important formats, lanes and speeds of the M.2 standard.

Who like to install a NVMe PCIe SSD with Windows 7, is probably wondering why the M.2 NVMe SSD is not recognized. Because the M.2 NVMe SSDs have conquered the market before Windows 7, it is necessary to install the matching Windows 7 NVMe hotfix. If you wish to install Windows 7 on a NVMe SSD, you must previously embed the NVMe SSD hotfix into the Windows 7 ISO or install Windows 7 on a SATA SSD, install the drivers together with hotfix, and then transfer it to the NMVe SSD. Who needed help, can ask us in our PC Forum.

Before we will come to the benchmark results, we want to show something very special on OCinside.de and that is the heat distribution and temperature of the M.2 SSD with an infrared thermal imaging camera, which also supports image overlay and results in an interesting mixture of the infrared image and real image.

Something above 70°C are not uncommon with M.2 SSD boards, but a maximum M.2 SSD temperature of over 100°C after some benchmarks was new even for us. We don’t like to think about, how the SSD is heating up when it’s installed below a graphics card or in a notebook. 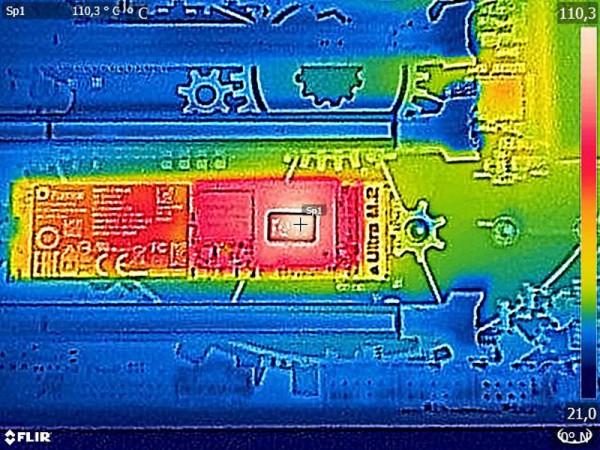 Unfortunately, we have received still no answer from Plextor, whether there is a thermal protection and when this occurs. As mentioned on the previous page, we would advise to one of the variants with heat sinks or recommend another passive or active cooling solution.

Recently we had also shown an interesting video in our OCinside YouTube Channel, where we have filmed the M.2 SSD on an ASRock Z270 Taichi motherboard with the thermal imaging camera, while the AS SSD benchmark is completed. To prevent that you have to wait too long, the IR heat film is shown in 4x speed.

After all these information, we finally come to the NVMe PCIe benchmarks.